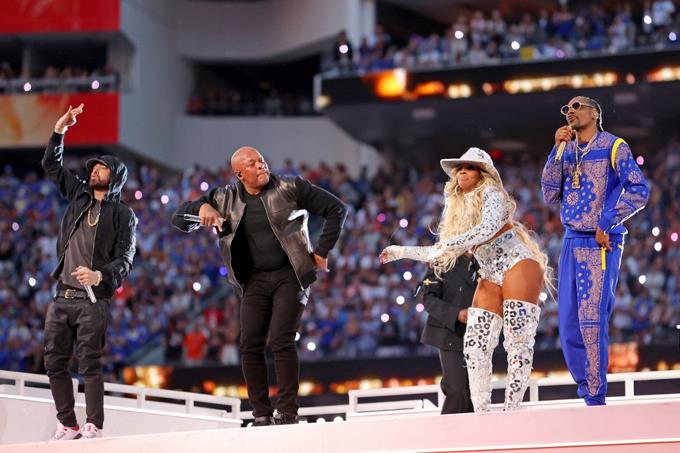 THIS past week one of the most trending stories in pop culture globally was the Super Bowl final. According to NBC news, 101.1 million people watched the Los Angeles Rams beat the Cincinnati Bengals this past on Sunday on television via NBC and Telemundo.

An additional 11.2 million people streamed the game, making the total audience over 112 million. The Rams won 23 to Bengals’ 20.

American football is one of most popular sport disciplines in the US, but globally it is one of the least embraced of American cultural exports. Somehow, American football has not done as well as basketball in terms of uptake from sports and entertainment fans across the world. How do I know this? Well, we are yet to have a true world final for the sport of teams other than those in the United States! So it beggars belief when the news media report that the Rams are the world champions.

I am not much of an American football fan or of any football. But I was caught in the hype, especially because of one compelling reason: hip-hop. A bonafide hip-hop head and one-time MC, I salivated at the opportunity to watch the OGs on stage. Think, Dr Dre (born Andre Romelle Young), Snoop Dogg (Calvin Broadhouse), Eminem (Marshall Mathers), Kendrick Lamar, and 50 Cent (Curtis Jackson) and queen of hip-hop and hip-hop soul Mary J Blige. Growing up, the haunting groove of gangster rap kept our heads ringing.

The low-end bass and kick drum punching your guts or banging against your chest, it was just hectic in the clubs when you snuck into the Teen Scene at Rumours night club or wherever it was you were partying. The pairing of Snoop as an MC and Dre as beatmaker and producer was as formidable as the musical partnership of the late Michael Jackson and Quincy Jones. G funk was Dre’s thing and Snoop rode all of those beats with his mellifluous drawl.

One thing was clear: we lived vicariously through all of that gangster rap. But that is the power of Brand America. The nation has given us some of the world’s most influential cultural icons and entertainment genres from sports, television shows, film and music. Well, and even food! But I digress. My aim this week is just to spotlight the power of hip-hop and what a tempestuous journey it has travelled from the five boroughs of New York, the inner city Black neighbourhoods.

With a line-up so strong, music fans had it coming. Hip-hop is in the place where rock and roll was some 40 years ago. It might as well have been a rock and roll band on that grand stage. It might have been the Rolling Stones, but it was not. It was a bunch of former street hustlers showing the world the level of their creativity and the transcendent nature of their musical vision.

Before I wrote this piece, I went to YouTube and noted 51 million views. I also noted one interesting detail. Not a single dislike for the musical performance of Dr Dre and company. It is awe inspiring. The performance was a powerful cultural moment and very significant. This was hip-hop grabbing America by the throat and “making ’em all look”!

Rap started in the dirty rat-infested hoods of racially segregated America…the cultural production of the under-privileged and oppressed black folk of the Bronx, Brooklyn, Queens — all the five boroughs. These kids stood no chance and the deck was stacked high against them. Making it out and even into the homes of suburban majority White America with the dough was a long shot.

Rap was just one element of the sub-culture forged from graffiti, breakdance, fashion, theatre, Dee jaying and MCing as Kool Herc, Grandmaster Flash, Melle Mel, Afrika Bambaata and KRSOne led the way. It was initially frowned upon back then as just a fad, but they did not see it coming. The movies, the breakdancing, the fashion, the music, all helped to push it forward and around the globe .

The era of gangster rap around the ’90s and into the 2000s was somewhat a low point for the genre as it introduced unsavoury elements of profanity and hyper-sexuality which often waded into misogyny. The daggers came out and the likes of NWA and later Tupac Shakur centred the debate on the socio-political impact of their musical content.

The Black Caucus in politics was generally not amused because gangster rap appeared to typify a debased lifestyle. For the rappers, they were just “keeping it real” or telling things as they were in America’s gang-controlled inner cities of the Bronx in New York and Compton in California.

Rap grew like a rose on concrete in America’s troubled inner city projects.

Initially they rapped about the struggles, the disillusionment of Black lives. Initially they vented their frustrations against the system which seemed designed to hold them down. The music was a window into the soul of the black nation and though the ’70s had disco music, funk and pop, rap was growing quietly in the back.

Around 1983, rap began to stake its claim on the popular imagination with the release of musical films such as Beat Street. Several decades down the line, and through all the headbutts and knockdowns in the dog-eat-dog world of showbiz, rap is the number one most recognizable American cultural export.

Some 50 years down the line, hip-hop is the single most resilient and most profitable music genre over several decades and still rising and going through various mutations. The world rocks to hip-hop. Dr Dre and company understood the assignment at Super Bowl 56 in front of a global audience of over 112 million and snatched it like true hustlers.

Eminem, born Marshall Bruce Mathers III, though coming from a Caucasian background, was brought up in almost similar fashion to the rappers he shared a stage with on Sunday and he, like them, came up to earn his stripes. Personally, I believe he played a role in helping demystifying the rap music idiom to cross boundaries into the white majority. The political economy of the music industry works like that.

Blacks are in the minority. But Eminem was, initially, looked upon with suspicion by some as just another privileged white boy about to do an Elvis Presley on a black sub-culture. In The ’50s and ’60s, Presley had been accused of cultural appropriation as he rode on the coat tails of blues artistes such as Chuck Berry and Big Momma Thornton on his rise to fame.

Eminem however soon earned the respect of his peers on account of his sheer artistry as much as on account (in my view), of the fact that he was under Dre’s guidance at Aftermath Records. Poetic justice if you ask me. So yes, hip-hop is the world now. These brothers can actually take the baton from Michael Jackson and say: We are the world!

In the aftermath of the tragic deaths of civil rights leaders and politicians toward the late ’60s such as Malcolm X, Martin Luther King and Robert Kennedy, Black America was in a rudderless state. Politically, the Black Panther movement was trying to fill the leadership gap in politics and was having run-ins with the law enforcement agencies.

I can imagine the sense of despondency among people in the African-American community. In Africa, the liberation movements were in their nascent phase and, of course, the political activists of that time cross-pollinated across the Atlantic with their American brothers.

The Mandelas, the Martin Luther Kings, the Kaundas at one time were in communication with one another as some of the file photos reveal. I imagine that even Steve Biko was influenced by the radical Black Panther movement in his formulation of his black consciousness ethos. This was the age of the Afros, bell bottoms and berets. The politics influenced the fashion and so forth.

Straightened Afro hair was a statement of pride and self-acceptance and Black people all over the world connected through the politics, fashion and music. Throw in the Blaxploitation movies from a condescending Hollywood film industry proliferating negative stereotypes of black identity, the deal was sealed. In sport, the ’60s and ’70s had boxing and Muhammad Ali was a diety.

His entry on to the world stage elicited visceral reactions from people from right across the spectrum. Who was not spellbound by Ali’s intelligence and articulation of the concerns of black America? I call him the soul of hip-hop. Ali was as much an artiste as he was a sports figure who understood his assignment. Consider the following little poem he recited before a boxing match with one of his opponents:

“Float like a butterfly, sting like a bee. Your hands can’t hit what your eyes can’t see.”

The journey of the drum

A bewildered George Foreman could not fathom why the Zaireans were yelling “Ali, bomaye!” (Ali, kill him!) before their famous Rumble in the Jungle epic duel on 30 October 1974, at the 20th of May Stadium in Kinshasa. Ali was just plain charismatic.

His wit, humour and braggadocio sucked people in like no other cultural icon probably ever shall be able to do. Where am I going with this? Well, the melding of sport and music is not new. That particular boxing match was peppered with concert performances from godfather of soul James Brown, Miriam Makeba, Manu Dibango, Hugh Masekela and others.

When you look back into time, you begin to understand how at one time the late queen of song Miriam Makeba was romantically involved with US crooner Harry Belafonte and Black Panther leader Stokeley Carmichael.

At some point, the late US jazz icon Louis Armstrong came to the then Rhodesia. He did cover August Musarurwa’s “Skokiaan” and famously gave the late Zimbabwean-South African jazz guru Hugh Masekela his trumpet.  The African diaspora continues to cross-pollinate and feed off each other to create and serve up unparalleled popular culture to a stunned world.

Maybe someday in Africa we will learn something from Sunday’s event at the Super Bowl. Early last month, the Africa Cup of Nations final was played out between Senegal and Egypt to millions of viewers from across the world.

Somehow, our popular African musical exponents lost an opportunity to bring their sound into the homes of global sports fans in the manner the hip-hoppers did in the US. But maybe that is because not too many people can beat America when it comes to putting a show together. In the end, Americans understand that whether you are dealing with sport or music, the bottom line is that you are in the entertainment business!

Related Topics:Hip Hop
Up Next

Red carpet treatment at the NAMAs!