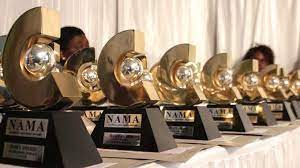 THE red  carpet will be rolled out to guests at the 20th edition of the National Arts Merit Awards on 26 February 2022 at the majestic Harare International Conference Centre.

Also known as the NAMAs, the show makes a welcome return after a two-year hiatus because of the Covid-19 pandemic.

Qualifying entries of art work were those produced between 1 December 2019 and November 30 2021.

The nominees from 2 135 entries that were received cover a wide spectrum of the arts such as visual arts, theatre, literary arts, film and television, dance, media, spoken word and music categories.

The awards ceremony will be held under the theme “Zimbabwe and Beyond #AmaLevels”.

For this year’s entries, music dominated submissions across categories with 794 entries followed by film and television with 434, visual arts 283, literature 254, spoken word 104 and dance 99.

Media and theatre categories received the least entries with 80 and 87 entries.

The NAMAs are the country’s premier awards show established through an Act of Parliament in 1985.

While the ceremony will be marked by glitz and glam, critics in the creative sector have roundly condemned the National Arts Council of Zimbabwe (NACZ), the organisers of the NAMAs, for postponing the show to this year.

The awards show, jointly hosted by the NACZ and Jacaranda Culture and Media Corporation (JCMC) was scheduled for 27 February 2021 but unfortunately the organisers decided to push the date back to 26 February 2022 without widely consulting the artists.

While the organisers have indicated that Covid-19 was the reason behind the postponement, it was rather unconvincing and in fact a smokescreen as the world over music awards such as the Europe Music Awards, the BET Awards, even the Bulawayo Arts Awards and others, have been held virtually and in some cases to a select audience.

In fact, it is less costly to hold the NAMAs virtually because there is no need for the big-budget red carpet event with its razzmatazz.

All the organisers needed was the nominees list and then the winners who would be awarded virtually and the event livestreamed on the official NAMAs YouTube or Facebook pages.

However, the NACZ insisted on postponing the awards show, saying it would be bigger and better this year.

“The next NAMA will be held under the theme ‘Our Legacy, Our Pride’.  NAMA shall celebrate Zimbabwe’s 40th anniversary as well as the 35 years of National Arts Council existence.

“This will be a unique event in the sense that on the night we shall honour forty (40) legends as we celebrate 40 years of Independence, dubbed NAMA Legends Awards #NAMAlegends.

“These Legends Awards provide for a strategic postponement of the competitive 20th NAMA whose hosting hung on the balance due to Covid-19 pandemic and the subsequent lockdowns,” Nicholas Moyo, the NACZ director, said last year.

“The prestigious competitive annual awards are therefore postponed for a year owing to the impact of the Covid-19 disease on creativity and the arts sector in particular over the past 8 months.

“In reaching the decision to postpone the competitive NAMA, NACZ is cognisant of the fact that a lack of activity in the sector has greatly affected the ability of artists to create in their usual spaces.”

One of the most anticipated categories is music in which musicians Jah Prayzah and Nutty O go head-to-head.

Hip-hop legends turn back the hands of time