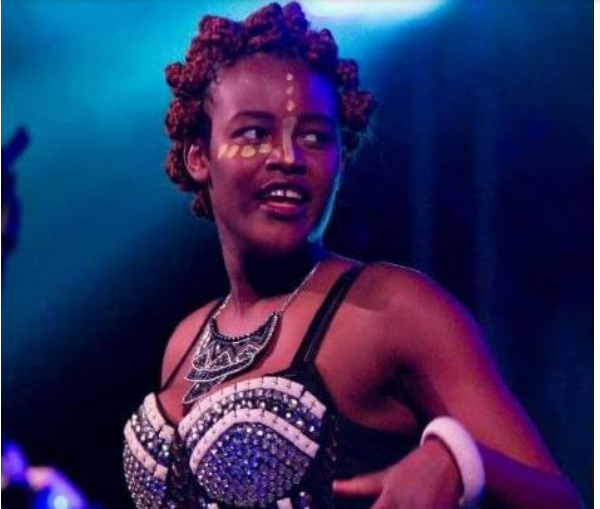 FROM  its genesis, the hip-hop genre has been one replete with and largely dominated by male rappers. But there have been several standout female rappers in the ilk of Queen Latifah, Salt n Pepa, Lil Kim, Da Brat and Eve along the way from the 1980s through to the 2000s.

Recently, Cardi B and Nicki Minaj have taken turns to steal the limelight, winning gongs at the Grammys and in other contests just to prove their mettle as hip-hop purveyors.

Still, aside from these “fierce ones”, the hiphop summit remains a brother’s game and time was when even the lyrics of some of the songs and videos from the gangster rap era appeared to promote misogyny in their characterisation of women.

Hip-hop is a global phenomenon today and has experienced some seismic shifts and mutations in terms of its reward and representation. Few perhaps personify the point more than one Awakiwe Sibanda (29), a young woman rising out of Bulawayo and who has been making the rap world look with her stunning traditional Ndebele regalia and skill at MCing.

She began her journey in 2012, before going professional in 2014, a year in which she appeared at Shoko Festival in Harare. She has appeared in a number of festivals along the way, including more recently the Reeperbahn Festival International. She has done collaborations with other female MCs such as Voices of the Revolution in the United Kingdom.

In 2016, NoiseyRaps produced AWA: Ghetto Queen of Zimbabwe, a nine-minute documentary based on her sprouting as a rose growing out of the hard streets of Makokoba township, a place renowned for spawning notable and notorious persons alike.

The short film brought her rap career into focus and won the inspiration award in Research in Film Awards (Rifa) in the UK. Using the stage name AWA, she has snagged the Outstanding Hip-hop Act accolade at the 2021 Bulawayo Arts Awards (BAA) edition in a tightly contested race. She is once again a contender for the Best Female and Best Diaspora category in the upcoming Pogues Zimbabwe Hip-hop Awards.

The NewsHawks writer Addy Kudita (AK) spoke to her about her career:

AK: You recently won the BAA outstanding hip-hop artiste category 2021 in a tightly contested field dominated by male rappers. How did it feel to win the award?

AWA: It was such an honour to win the award. I like to be thrown in the same ring with men because hip-hop isn’t about gender, it’s about skills. I believe that putting women in a “Best Female” category perpetuates misogyny.

It’s like a side show and the “Best Male” is always the main event. No one should be in a better position because of their gender and no one should be disadvantaged by it. We still have a long way to go, but hopefully one day we will get there.

AK: When was the moment you realised that you were going to make a career out of hip-hop, I mean given the personal journey and the detours you have taken?

AWA: It was back in 2012 when I recorded my first song. I fell deeply in love with rap music, writing songs and listening to the sound of my voice. It was risky, many people advised me not to, but I jumped straight into the deep end and decided to follow my dreams.

AK: You are adamant and vocal about issues and representing the community from which you come in your songs and your message could well be described as conscious rap. Is this a fair descriptor and what are the issues that animate you the most when it comes to music?

AWA: I rap about politics, gender-based violence, child marriages and many other social issues, so it’s safe to say I do conscious rap sometimes. I am a versatile storyteller.

AK: You have your critics who believe you wade too much into politics or that you are not staying in your lane as an artiste. What in your view is your role as an artiste in society ? AWA: I don’t like it when people box me based on their feelings as if mine don’t matter.

I get a lot of criticism for doing political hip-hop from people who also lash out when artistes don’t post #ZimbabweanLivesMatter. This is why I always do as I please because you can never please everyone. I follow my own moral compass.

AK: Your packaging is interesting. You wear traditional Nguni regalia as opposed to the standard hip-hop garb popularised by the likes of Nicky Minaj with their jump suits etc. What was the reasoning behind the packaging?

AWA: I started wearing traditional Ndebele costumes before African fashion was trendy and cool, so it wasn’t an easy path, especially for hip-hop. Many people told me that I shouldn’t dress like that because it would confuse people, but that’s exactly what I wanted.

I wanted to birth a new dawn, Ndebele Rap. Fusing hip-hop with my culture was perfect because that meant that I could still do hip-hop and be myself. I also chose traditional costumes because they are gorgeous and they set me apart. Those who forget my name always remember the costumes.

AK: How have audiences received you dressed up that way and then going on to spit the bars you do and in the manner you do it?

AK: What is the difference between European and African audiences in terms of the manner they react to your sound?

AWA: The European countries I have visited have welcomed my sound with open arms. Unfortunately I haven’t travelled in Africa, I performed in Bulawayo and Harare, the audience was amazing. AK: Let’s talk about your creative process and production team.

How does a song evolve in terms of inspiration and who produces your music? AWA: Ghanaian Stallion has been producing my music for years. He has shaped my sound and watered my potential. He understands my skills and always pushes me to go beyond limits.

Whenever he sends beats, he always says “I know you will murder this”, which always motivates me and I love (that) he understands me. I take some time to listen to the beats and  it literally flows from there. I allow my imagination to take me wherever it wants. Making music is so precious to me because I create a parallel world I own and I can be anything or anyone. I enjoy it so much. AK: Let’s talk about your music business. How do you make the ‘loot’ or rather what makes the ‘loot’ for you? Some talk about streaming and online sales.

AWA: I haven’t released an album yet, so I can’t say much about sales but live shows keep me afloat, I perform at festivals and corporate events. It puts food on the table and I’m grateful for that. I want to learn more about the music business because coming from a struggling industry like ours keeps us blinded from how things work in a proper industry. I am learning every day. AK: How would you best describe your sound?

AWA: I always try not to. I believe that having “my” sound will kill my creative freedom and potential. I just go where inspiration calls and express myself in any way I choose. I usually rap in Ndebele and English, but I don’t have a sound.

I shape-shift into anything if it’s what I want. AK: The Pogues Hip-hop Awards are next month. How do you feel about the nomination, especially seeing as you are battling once again with mainly male rappers for top honours?

AWA: I appreciate the recognition.

AK: You worked with Cal_Vin who was as controversial as he was the stuff of genius, what are our recollections of working or performing with him and how do you feel about his tragic passing?

AWA: His untimely passing was heartbreaking. I still can’t believe that he is gone. We had a lot of plans, he featured on my album. We were planning to do visuals for it. The hip-hop industry will never be the same without him.

AK: As a Ndebele child, are there concerns that you have that you feel need airing?

AWA: Making Ndebele music in Zimbabwe is exhausting and very difficult. The tribal divisions, marginalisation and lack of resources make it difficult to get the music to the people.

Most people in Matabeleland listen to South African music because that is what they watch on TV, the dominance of South African music and culture makes it very difficult to push anything made locally. It’s tough, but hopefully things will change someday.

The pundits say AWA is a top contender in the Zim Hip-hop Best male category. But she is up against respected MC Kikky Badass who has several nominations, Noluntu J, Skillz Tha Louche and Tashamiswa.

Win or lose, AWA is making waves, recently getting a co-sign from South African pop star Sjava to work with hip-hop act Big Zulu. To be fair, AWA, by her own admission, has yet to release a full album but the Austrian-based artiste is definitely one of the most impactful hip-hop acts of her generation.

Revellers throw caution to the wind as festive season starts