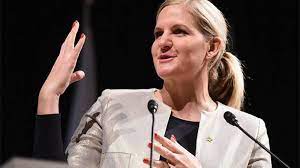 THE year 2022 showed signs of recovery for the creative sector in the aftermath of the Covid-19 pandemic. What is all the more worrying is that the arts sector will rise again on its own with zero support from either the government or anyone else.

Finance minister Mthuli Ncube and also the Sports, Arts and Recreation minister Kirsty Coventry (pictured) have been making promises which in the end they failed to fulfill. This is in spite of the pillar within the National Development Strategy 1 that the arts have a role to play within the economy.

Sadder still, Ncube and  Coventry seem not to have clear understanding of how the arts can be developed and sustained. In other words, the artists and creatives have been lied to and treated like desperate people following the negative impact of Covid-19 which on its own was the height of ludicrousness.

As 2022 comes to an end, one can only hope for a better 2023 and also support from the government. The entertainment scene was largely dominated by live shows and festivals.

South African music duo Major League DJz finally fulfilled their promise when they performed in Harare at the Borrowdale Race Course. The sold out concert proved the group’s popularity in the country. Initially, the twin brothers Banele and Bandile Mbere were scheduled to perform at Palm Estate in Borrowdale at a concert dubbed “The City Shutdown” in 2021 before the police stormed the show and shut down the event.

To compensate for the no-show, Major League DJz promised to return to Zimbabwe in December for a free show. Unfortunately, that did not happen due to the Covid-19 lockdown plus the fact that Major League DJz were fully booked during the festive season in 2021.

Nigerian star Joeboy performed in Harare courtesy of arts promotion company Infinity Sky Entertainment. The show was initially scheduled for 21 December 2021, but it was postponed to Independence Day eve 17 April 2022 due to Covid-related issues.

Joeboy’s lacklustre performance at the Borrowdale Racecourse left many wondering why he failed to bring a live band.

Benhura gets lofty US city honour Dominic Benhura has long been a world-renowned sculptor from Zimbabwe, with worldwide recognition coming his way over the years. Few, though, eclipse being awarded a “day” by a city in the United States of America. 14 May 2022 will remain etched in the sculpture sector as historic after James Brainard, the mayor of Indiana city Carmel, proclaimed it Dominic Benhura Day.

This follows the installation of Benhura’s sculpture as part of the permanent collection to the public art display, bringing value and cultural diversity to a city labelled one of the safest in America. The sculpture was commissioned by owner of Kuaba Gallery, Jayne During, who for the last 20 years has been handling Benhura’s work both locally and internationally.

The unveiling of Benhura’s new sculpture was presented by The Carmel Art District and Kuaba Gallery at Main Street and Veterans Way, next to the Carmel Chocolate Café. According to the Kuaba Gallery website, Benhura‘s pieces are said to be, “daring and bold” as he strives to capture balance and movement physically and emotionally in his work. “Inspired by nature and his family, the family dynamic is a theme found most often throughout his work,” a statement reads.

Mhlanga was hospitalised 10 days before he breathed his last in Bulawayo due to pnuemonia.

National Arts Council of Zimbabwe director Nicholas Moyo said they were saddened by death of Mhlanga.

Mhlanga was a playwright, filmmaker and creative director. His career in the cultural and creative industries began in 1982 when he founded Amakhosi which started as a youth karate club but switched to professional theatre in 1988. Mhlanga wrote more than 20 plays, among them The Good President, The End, Sinjalo, Children on Fire, and Vikela.

He has three books to his name. He also adapted the popular play Stitsha to a TV series. It featured the late Beater Mangethe.

Organisers of Stanbic Bank Jacaranda Music Festival held a successful fest that features a number of Zimbabwean and South African artistes over three-days at Old Hararian Sports Club. The 2021 edition was much smaller in attendance because of Covid restrictions and was held indoors.

The European Film Festival is back in Harare beginning 27 to 30 October 2022!

After two years of the Covid-19 pandemic, the 6th edition of the European Film Festival Zimbabwe will be hosted live at MMX.

The festival is a platform to share, promote and create exchange between African and European culture, focusing on Zimbabwean filmmakers.

For four days, 15 African and 12 European movies will be showcased in Harare in free of charge.

Much more than movies, the 2022 edition celebrated the success of previous editions, and in particular on the wide range of activities.

The festival was not only about screening movies in Harare and Bulawayo, it also includes input conferences, a masterclass, a short film competition, and a curated selection of African cinema.

Rick Ross staged his debut performance at the Harare International Conference Centre before a sellout crowd on 18 November 2022.

Despite the late start of the concert, Rick Ross did not disappoint. Ross performed his yesteryear hits, including those he collaborated with other artistes, which

drove fans into a frenzy. The whole auditorium, which was close to full capacity, could be heard singing along with Rick Ross whose trade name is The Boss as he felt the Zimbabwean love.

“I am happy to be in Zimbabwe and it is amazing. The people are full of love,” he said.

The event saw high-profile celebrities, socialites, millionaires, models including some from as far as Namibia, Nigeria, South Africa and Ghana flying all the way for Rick Ross.

Star FM radio presenter/producer DJ Mbale was sacked from the station over misconduct. The station announced via a Facebook post on its official page that DJ Mbale had been relieved of his duties over “various issues”.

DJ Mbale, whose real name is Gabriel Mbale, had a fallout with a number of dancehall musicians who accused him of demanding kickbacks in return for airplay.

The film has received great attention locally, regionally and internationally. Since its release, it has been shown at the Zimbabwe International Film Festival as well as in various festivals in India, Zambia, The Netherlands, Ethiopia and most recently in New Zealand. It has been showcased by UNFPA as part of their World Aids Day initiative for the Education Plus campaign.

The film has also been nominated for Outstanding Short Film at the Bulawayo Arts Awards held in December.

This followed a nasty break up between the two involving leaked X-rated tapes and nudes which trended on social media. The 23-year-old Shashl had claimed that she was raped by Levels in July 2021 at his apartment in Harare’s Eastlea suburb.

Winky D makes his mark as champion of the downtrodden