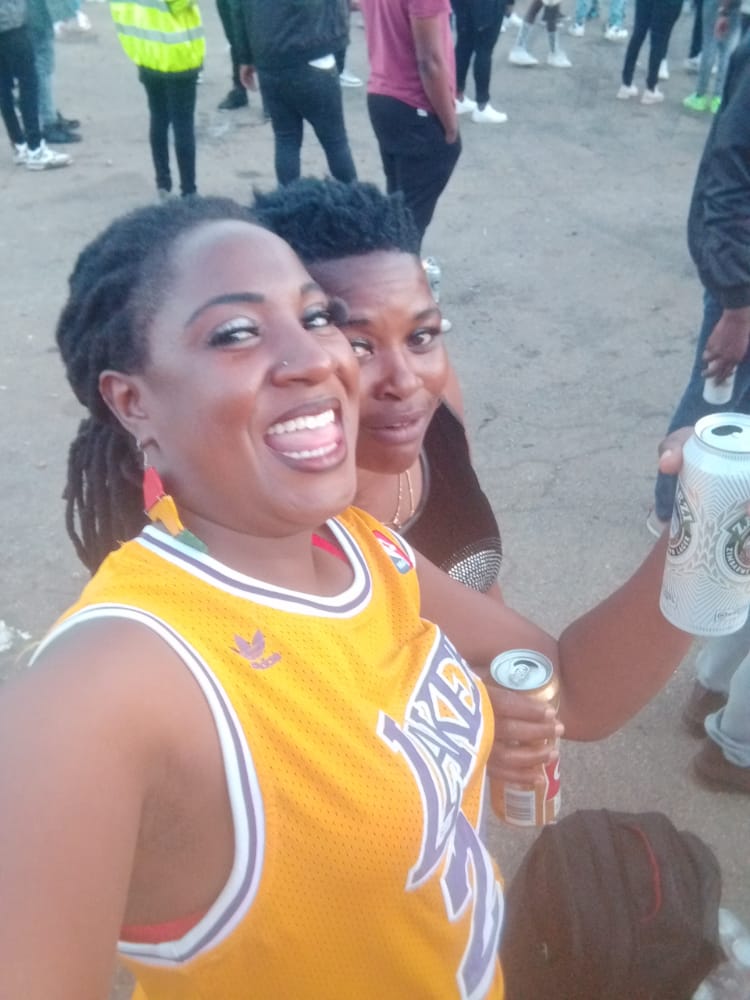 DEATH is heart-wrenching, but it can also be poetic.

Bubbly and fun-loving Emilliah Magoka (partly obscured) used to tell her friends, tongue-in-cheek, how she would like Alick Macheso’s music to be played at her funeral wake when she dies.

This was done without much hassle, but another wish she could not have imagined possible was to meet her favourite musician in her last moments on earth.

Last Saturday, tragedy struck and Magoka died following a stampede at a music show. Quite ironically, Macheso was among the array of performers on the fateful night and, as per her wish, they indeed belted out Macheso’s hits in sending off their dearly departed loved one!

“You know, in her element, she would joke that she would love Macheso’s music to be played at her funeral, and we did just that,” her best friend Avral Nyasha Veremu told The NewsHawks this week.

Thousands turned up at Harare’s Borrowdale Racecourse on Saturday for the popular Castle Tankard, two of them never to return home alive.

And those responsible for writing epitaphs could script touching eulogies of what happened on the fateful day.

Two jolly good friends, who stayed a few houses apart in the sprawling high-density suburb of Hatcliffe, went out for some merriment at the Castle Tankard.

For vendor Magoka, aged 45, two convenient things particularly drew her to the gig.

First, it was a free show, a wonderful opportunity to watch her favourite artiste Macheso without having to dig deep into her purse.

And second, with the public transport blues currently being experienced in Harare, Hatcliffe has easy access to the Racecourse, just one combi ride away on Borrowdale Road.

Accompanied by her best friend, Avral Nyasha Veremu, the two had a blast, including gaining access to the backstage since they knew Macheso at personal level.

During the chit-chat with Macheso, the sungura maestro invited the two ladies to join him at another show at City Sports Centre. Magoka never reached there.

As they were about to leave the Borrowdale Racecouse, life got very nasty at the park.

The premature end of the gig caused a fracas between the crowd and the police.

“We were walking hand-in-hand and all of a sudden a group of people came from behind and separated us,” Veremu wept as she narrated the tragic events to The NewsHawks.

“I went southwards and squeezed through the mobs via the exit gate and waited for about 30 minutes to see if Emilliah had made it too. Much to my bemusement, she was nowhere to be seen and I had no option but to force my way in against the fleeing crowds. Just as I got into the park, I saw Emilliah topless while the police stood there akimbo. I had to remove my top to cover up her body.”

Veremu, unable to control emotions, broke down uncontrollably, with a plate of sadza in one hand.

“I’ve lost a sister, my mentor. I don’t know if Macheso knows about this. She was there for me through all my struggles. But look, she’s gone. Is this the after-party Macheso had wanted, is this the way she chose to leave? Is this the fun we had hoped for?”

Magoka, known in the neighbourhood as Mai Collen, is survived by two children, Collen (25) and Anashe (14).

According to traditional custom, when a person dies, their belongings, especially clothes, are distributed among family members and close friends. This was indeed done after the burial to signal the end.

And the The NewsHawks visited the home of 44-year-old Thomas Maarira, who also lost his life at the stampede.

Mourners were still waiting for the body on Tuesday before it was taken to Nyanga for burial.

Maarira, who was a foreman at a construction site, is survived by his wife and two children.

“We received the news of the death with deep grief but then have been going back and forth as a family because it was only us the in-laws present, the other relatives are in Nyanga and transport and food had been a challenge,” said brother-in-law Jona Sosani.

“I think it was around 1am when a message came through his wife’s phone saying that ‘I am at the Borrowdale Racecource’. By then, it was already late because we had received the sad news with deep grief.”

“We are informed that the relevant authorities are conducting investigations and will update the nation at the relevant time. Our hearts and prayers are with you our Castle Tankard family, especially those who lost their loved ones and those nursing injuries.”

A good number of people have roundly condemned the police conduct at the Castle Tankard for “acting irrationally”.

Many attendees accused the police of causing the pandemonium by storming the stage and abruptly stopping the show during Winky D’s performance.

Others said the police should have gone via the stage manager to announce the stoppage time before the beginning of curfew time.

Whatever the case, the Castle Tankard 2022 tragedy could have been avoided!

Lending ban an admission of failure