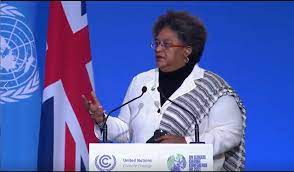 THE Prime Minister of Barbados, Mia Mottley, delivered a remarkable speech at the just-ended United Nations COP26 climate change conference in Glasgow, Scotland. Many Africans across the world would have been delighted to witness such solid leadership.

In many respects, she gave black people a voice. Mottley is not only a gifted orator, but also brings to the table commendable clarity of thought, a rare attribute in these troubled times when political charlatans are celebrated as messiahs. In an inspiring speech — delivered ex tempore — she deftly identified the problem at the heart of the climate crisis, dissected the topic to its bare components and proffered a solution.

It is one thing to outline a problem, but quite another to recommend a coherent solution. She did all this in a clear, confident manner, no doubt captivating many victims of climate crisis in the marginalised parts of the world, especially in Africa and the Caribbean. It was a masterclass in leadership.

More importantly, it was a wake-up call for African leaders who are terribly failing to provide inspirational leadership. When you look at the current crop of African leaders, which of them can be able to hold a candle to Mottley?

She is no saint, of course — nobody is — but her resolve cannot be ignored. Here is a simple task: scan the African landscape today and point to a leader who provides inspirational leadership. There was a time when Ethiopian Prime Minister Abiy Ahmed held great promise; but within a few shocking years he has morphed from Nobel Peace laureate to alleged human rights violator and warmonger.

Kenyan President Uhuru Kenyatta once showed glimmers of greatness. He is, after all, scion of Kenya’s founding father Jomo Kenyatta. Unfortunately, great leadership is not genetically transmitted.

As revealed by the Pandora Papers — the biggest collaborative journalism investigation of our time — Uhuru has turned out to be just another typical African leader who stashes his secret wealth in a vast network of offshore havens. In South Africa, a country that has traditionally been a beacon of hope to all black people on the planet, there is nothing to write home about.

The governing African National Congress has become so devoid of inspirational leadership that millions of disenchanted South African voters have simply abandoned political participation. There is a real danger that the ANC, the continent’s oldest liberation movement, is now in terminal decline. Results of the recent municipal elections buttress that point.

Botswana and Namibia, countries in this part of the world which have remained relatively stable in a sea of mayhem, have largely avoided some of the most damaging pitfalls of post-colonial administration. However, the two countries lack the gravitas — at the level of iconic leadership and sheer critical mass — to really influence the behaviour of clueless African leaders. We dare not mention the likes of Zimbabwe and Uganda, countries that are perfect caricatures of catastrophic African governance.

These nations have every necessary ingredient for prosperity — except leadership. When racist agitators are keen on peddling the idea that black people are inherently incapable of governing themselves in a civilised way, they often cite such broken countries as perfect examples.

Zambia’s recently elected President Hakainde Hichilema has the necessary attributes for greatness, but his long-time scorecard will depend on his commitment to staying the course.

He must bring economic transformation to that country, while restoring Zambia’s hard-won democratic dividend.

He is already a step in the right direction: clean hands, an aversion to autocracy, solid managerial skills, a never-say-die attitude and a sense of humility that keeps him constantly alive to the hopes and aspirations of citizens. Africa does not need charity; it needs leadership.

Related Topics:cop26Mia Mottley
Up Next

Mnangagwa is a hard sell for Zim

Ominous signs ahead of 2023