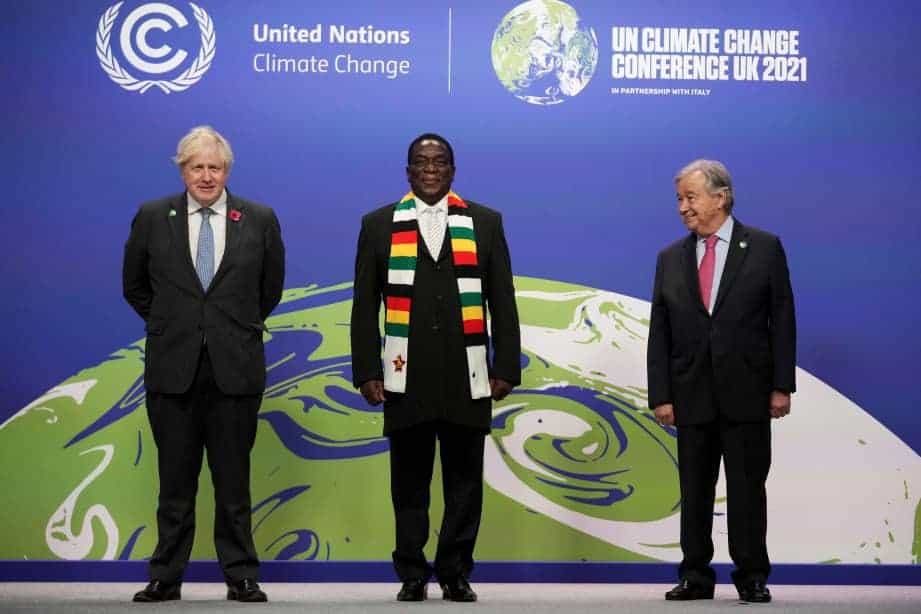 WHEN Zimbabwean President Emmerson Mnangagwa and his entourage left for the recent United Nations Climate Change Summit in Glasgow, Scotland, they had two things in mind: The anti-sanctions campaign and international re-engagement to end choking global isolation and attendant pariah state status.

Before the conference, they had stated their mission loud and clear. Their social media platforms and posts by their publicists showed excitement amid a propaganda blitz that was to reach fever pitch at the summit.

By the time the summit came, they had mobilised supporters to show solidarity and put pressure on the big global powers that have imposed targeted sanctions on Harare, mainly the United States, to pay attention to the issue.

However, Mnangagwa’s supporters proved to be a mixture of genuine backers, duped people just roped without an idea of what was going on and chancers who treated the summit as an occasion for merrymaking — a moment for drinking, dancing and partying.

There were even damaging jokes to the effect that some people were mobilised to await Mnangagwa’s arrival thinking he was actually a famous rumba star from Africa coming to perform at the summit. The optics were not good. And that inevitably soon turned into a public relations disaster. It was a botched PR job which cost millions.

The sponsored enthusiasm, boisterous visibility and partying created unintended consequences. The British media picked on that. For instance, an article in the influential British Daily Mail showed Mnangagwa’s supporters stocking up on booze at Costco in Glasgow, pushing trolleys full of expensive whiskies and alcohol.

The question immediately arose: Who paid for that? Was it the supporters themselves, the regime’s funders or taxpayers? The story headlined Our country’s falling apart . . . never mind, lets party! came to symbolise the venality of the Mnangagwa regime and the costly propaganda charade that unfolded behind the scenes at the summit.

“Unemployment and inflation in Zimbabwe are currently sky-high. And the country’s leader is accused of presiding over a regime as oppressive and ruthless as that of predecessor Robert Mugabe. But the regime’s supporters didn’t seem to care as they threw a boozy welcome party for President Emmerson Mnangagwa in Scotland,” part of the story read.

Exposed and in a bid to contain the damaging narrative of a wasteful regime bribing people to support it, the Zimbabwean government could only offer a lame explanation, claiming it is Zimbabwean culture to make a party of most occasions.

Pictures of Mnangagwa desperately hobnobbing with British royalty, officials and trying to secure photo opportunities with world leaders to push his agenda and addressing an empty auditorium made things worse. Mnangagwa’s spokesperson George Charamba could barely hide his frustration, insinuating that his boss was in Glasgow not to talk to summit delegates as such, but other invisible audiences.

Evidence of extravagance, underlined by reckless teenage-like partying, also quickly emerged, putting the Mnangagwa entourage to further shame. While other leaders from the region and with similar modest means like Zambian President Hakainde Hichilema used commercial flights with small delegations to the summit, Mnangagwa hired a private plane and took with him more than 100 delegates for the same event.

Hichilema had several serious meetings arranged for him by his team, while Mnangagwa worked through encounters with junior London officials as he showed open desperation to chat to top British and American leaders.

One story bursting Harare’s propaganda bubble indicated that while he blamed sanctions for the country’s financial dire straits, Mnangagwa had spent US$1 million on a luxury flight to the climate summit as he flew to Scotland last Sunday on a private jet hired from former Soviet Republic Azerbaijan, even as poverty deepens at home.

The luxuriously-outfitted Airbus A319-115 (CJ) costs an average US$415 000 to hire for a one-way trip from Harare to Glasgow, the Scottish capital, according to privatefly.com. The estimate suggested the Zimbabwean leader was spending close to USS$1 million on travel alone.

The Airbus Corporate Jetliner, registration 4K-8888, was one of slightly over 190 exclusively-outfitted jets in the range for private customers — typically “companies, individuals such as billionaires and governments,” according to David Velupillai, the Airbus marketing and communications director.

The corporate jets cost at least US$87 million. Meanwhile, Zimbabwe’s civil servants, including teachers, nurses and doctors, have been protesting over low pay and poor working conditions. Even war veterans, staunch Zanu PF supporters, have been demanding better remuneration. The economy remains in a parlous state.

Service delivery is poor or has collapsed in some cases. The United Nations estimates that over six million Zimbabweans require food aid.

All this amid growing corruption and abuse of public resources. Yet that could not stop Mnangagwa from embarking on a costly charade to Scotland, which did not achieve anything in relation to the lifting of sanctions and international re-engagement.