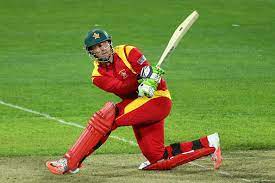 AT a small bed-and-breakfast establishment in Kwekwe, Brendan Taylor (pictured) was having eggs and bacon in the pretty gardens, but there were no smiles. He had just failed to make a decent score at the nearby Kwekwe Sports Club for local side Rhinos.

Expectations of big and dramatic innings had not been met in these very early days of his career.

But I had seen instead the real Brendan Ross Murray Taylor in the nets and his previous efforts. He was suffering a setback. I joined him for an off-the-record-chat and told him:

“Don’t concern yourself with a poor start. Many of the world’s great batsmen have debuted with failures, even ducks, yet gone on to fame and fortune. You have the technique and the attitude to succeed. So stick at it and enjoy.”

And so it came to pass. Taylor was not quite the sensation of Andy Flower or Graeme Hick. But neither was he a bread-and-butter player somewhere above the rest. Instead, he joined the very short list of great Zimbabwe wicket-keeper batsmen in a decade, together with Tatenda Taibu.

And he joined the additional list of prominent cricketers emerging from this country’s cricket history, such as David Houghton, Colin Bland, Joe Partridge, Pithey brothers, Murray Goodwin, Heath Streak, Andy Blignaut and others.

A natural stroke-maker, Taylor scored nearly 10 000 runs including a dozen majestic centuries compiled with power and elegance, turning that Kwekwe B&B to a long distant memory.

Like Andy Flower before him, he had the heavy responsibility of captaincy, opening bat, wicketkeeper and cheerleader to a mediocre and sometimes downhearted team. It was a burden borne, like Flower, with determination to play a reliable role and be pointed out as a role model.

Consistency for an opener is doubly difficult with the state of the pitch unknown and international fast bowlers being fresh. The first 20 runs for any batsman are far more difficult to achieve than other similar periods of an innings. Taylor succeeded in those in greater proportion than most.

His capabilities were enough to catch the attention of Nottinghamshire County Cricket Club, who know a thing or two about class players – for instance Garry Sobers, Richard Hadlee, Stuart Broad, Bill Vice and Harold Larwood. They also gave a trial run to Zimbabwean Paul Strang before.

His T20 innings were not too fruitful, this not being his natural department, but some of his towering sixes were memorable, not least the two which won, in the final over, a tight international match at Harare Sports Club that caused some personal concern for safety in the Press box. He was leading Zimbabwe’s scorer in the 2015 World Cup though, a success where it really mattered.

This most likeable person, so easy-going off the field, is still only 35. That is perhaps four or five years too early for retirement, though well in time to launch a new career. It will be interesting to see just what that is. He refers to the need for financial stability. Whoever got that playing cricket for Zimbabwe? So is it the IPL?

This is how Zim would also feel, Ramiz, if Test status is taken away