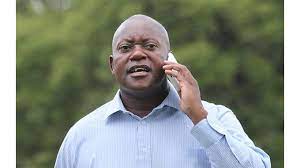 AS ZIMBABWE’S 2023 Rugby World Cup quest gathers momentum, one of the best local players never to play in the tournament, Jackson Muzawazi – who sadly passed away this week – has been sent off by a touching tribute from a very important figure in his career.

Godwin “Jaws” Murambiwa (pictured), one of Zimbabwe’s best rugby brains and for a sustained period Muzawazi’s coach for both club and country, hailed the Old Hararians and Sables legend for his “beautiful heart” and gentlemanly demanour in a sport identified by its brute nature.

Stocky and rotund in build, Muzawazi looked more like a prop or hooker than what he actually was – a lively inside-centre with an unbelievable turn of pace for a man of his size – a firm fans’ favourite and one of the most entertaining Zimbabwean rugby players at the turn of the millennium.

Muzavazi died this week, in his late 40s, plunging the rugby community of Zimbabwe into mourning.

“They say rugby is a hooligan’s game played by gentlemen,” Murambiwa told The NewsHawks this week.

“Well, Jacko, or Baba Rumbi as we called him, epitomised the ‘gentle’, a soft-spoken and well-mannered man with a beautiful heart. Put him on a rugby field, he was fiercely competitive and feared by opponents, a trait rare in today’s professional era. Go well, Jacko, fly high and rest in peace, Sable.”

Beyond exemplifying sportsmanship, Muzawazi was also a role model in the amateur era of rugby, a tenacious fighter who encompassed all ethos of the game in those days.

“As you know, back in our day, it was never about money,” Murambiwa commented. “I feel the effort in modern-day rugby tends to try and replicate monies available, which makes the game better. But it also loses that personal touch.”

19 years ago, a Zimbabwe side coached by Murambiwa was just a win away against Namibia from qualifying for the 2003 World Cup in Australia, but the Sables lost 31-22 to their biggest continental rivals at Hartsfield in Bulawayo in a match that scrumhalf Ryan Bekker took some flak for the result. Muzawazi and a few other star players came on from the bench in that crucial tie.

And is an honest expression of self-appraisal, Murambiwa – only the second black coach to take charge of Zimbabwe after naturalised Englishman Collin Osborne – conceded that the outcome would probably have been different had he fielded his best line-up from the beginning.

“Namibia was always hard because they have made the art of bringing in their big guns last minute,” said Murambiwa.

“In 2002 it was tough to take, we had done everything to qualify. But the last-minute preparations were not ideal. The late Jacko, Bright (Brighton Chivandire), Beddy (Elimon ‘Bedford’ Chimbima) all didn’t start because they stayed behind in Harare for work, only to come into camp Thursday, so I couldn’t start them. Maybe in retrospect we should have started them. We got permission to camp in Bulawayo early, so we ended up starting with (Mthokozisi) Ngwenya at centre. (Paul) Georgeou played with Darren Uys at locks and (winger) Karl Mudzamba flew in 12 hours before (from New Zealand) and was jet-legged. That team did their best, bear in mind that we beat Namibia in 2001 for the first time in 10 years, after I took over as coach. In a space of 12 months, they got their external players and beat us in Bulawayo.”

At club level, Muzawazi – who could also play on the wing but was mainly preferred in the number 12 position because of his solid defensive game – was a stalwart of the glorious Old Hararians side of the late 1990s into the early 2000s, under Murambiwa and then John Falkenberg.

It would be a fitting honour for Muzawazi, according to Murambiwa, if the present crop of Zimbabwe national team players qualifies for the World Cup for the first time since the 1992 edition.

“This is the first time in a long time where we have players that are conditioned, skilled and playing competitive rugby,” Murambiwa said. “If we were to complement these players with locally-based guys playing in a local competitive league, I believe they will get us over the line. We must do everything in our power to support the Sables get over the line and qualify. 2023 is so near for the Sables.”

‘Dede Ayew not fit to play against Warriors’

Taylor, cricketer who shone in a dull decade