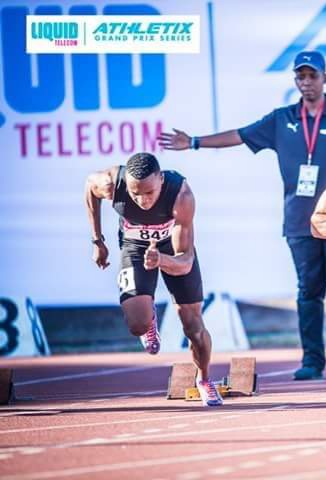 THE first and only Zimbabwean individual Olympic medallist to date, Kirsty Coventry, was nurtured on a home swimming pool at an affluent suburban home in Harare.

ENOCK MUCHINJO
In sharp contrast, the dusty running tracks of Chitungwiza – a high-density dormitory town 30km south-east of the capital city – was the early playground for a sprint prodigy who believes he can be next to the medal podium for Zimbabwe after the legendary swimmer and Africa’s greatest Olympian.

At 26, Ngoni Makusha is Zimbabwe’s fastest man, with a dash of 10.17 seconds in the 100 metres event.
Makusha has high hopes to be part of Zimbabwe’s Tokyo 2021 Olympics team, and he particularly fancies his qualifying chances in the 200 metres race.

“With the training I have been undergoing, I’m certain that I will be able to achieve that. So what I need now is some competition time and more training, then I will be good to go. It’s a whole new journey I’m embarking on, so I’m determined to make it.”

While qualifying is uppermost in his mind at the moment, Makusha is not afraid to dream bigger, so winning a medal is something he views as an achievable goal.

“If I qualify, my goal is to make it to the final,” Makusha said. “You know, once you reach the finals, anything is possible. It will be a great honour if I can get an Olympic medal for my country, definitely it will be a dream come true to be mentioned alongside greats like Kirsty Coventry.”

While Makusha is the quickest active sprinter in Zimbabwe, the national records in both the 100 metres and 200 metres events are targets he is still aiming to reach. Ex-Olympians Brian Dzingai and Ngonidzashe Makusha (no relation), holds these records with times of 9.89 and 20.12 respectively.

“We have a good history of producing great sprinters as a country,” said Makusha. “Brian Dzingai came really close at the Beijing Olympics (in 2008) and he is someone I look up to him. Ngonidzashe Makusha’s time of 9.89 would also have gotten him into any major competition’s final. I also look up to him.”

The younger Makusha, however, has some bragging rights over his two local heroes. In 2019 alongside Tatenda Tsumba, Dickson Kamungeremu and Itayi Vambe, they shattered Zimbabwe’s 4x100m relay record held by Dzingai, the older Makusha, Lewis Banda and Gabriel Mvumvure.

The feat qualified the quartet for the World Athletics Relays in Yokohama that same year.
“That was really special, it is the highlight of my career so far,” Makusha remarked.

Makusha attended St Aidan’s Primary School in Chitungwiza, which is also the alma mater of Zimbabwe cricket team rising star Wesley Madhevere. From there, Makusha proceeded to Harare High School in Mbare, where he continued to hone his skills as an athlete.

“I’d say it was just a natural thing for me, I didn’t have to try too hard right from grade one,” said Makusha. “I noticed that I was quick from a young age. I would win every race, and I became a national champion when I was in grade six, representing Harare province. So it’s something that has always been in me.”

Makusha this week launched a GoFundMe campaign to raise funds for further training and qualification competitions in South Africa.

Related Topics:AthleticsNgoni Makusha
Up Next

HawkZone: Mid-air meeting with a visionary who saw far