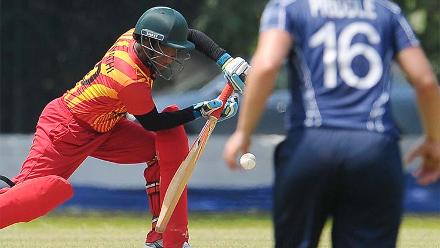 FORMER Zimbabwe women’s cricket team wicketkeeper Nonhlanhla Nyathi has lauded the forthcoming home series with major international side Pakistan, describing it as a rare opportunity in her playing days.

BRIAN GOREDEMA
Pakistan arrived in Harare this week for three one-day matches and two Twenty20 internationals in the Zimbabwean capital. Zimbabwe Women, however, do not have ODI status, meaning that the 50-over contests are only classified as one-day matches.

“To be honest with you, I am just happy that the girls will be playing a formidable international side, something that was rare during my playing days,” Nyathi told The NewsHawks this week.

“As far as I am concerned the result will be inconsequential, the most important thing is for the girls to learn from this tour because you can’t buy such an experience from the supermarket.”

Zimbabwe’s women team has been enjoying a fair share of game-time in recent seasons, an exciting period that has also delivered central contracts for some of the female cricketers for the first time since the team made its international debut in 2006.

“Great strides have been made by the current board to make sure that the women’s game is professionalised, and as a former cricketer who paved way for the current generation, I can only envy from a distance,” commented Nyathi, adding on: “In the past, it would have been convenient not to organise games for the girls due to Covid-19, but imagine now our women are able to play at the height of a pandemic. This just shows you that the women game is now being taken seriously within the corridors of power.”

The 33-year-old former international said the current Zimbabwe side, captained by Mary-Ann Musonda, should take full advantage of local conditions if the hosts are to entertain any hopes of causing an upset against the Asian giants.

“Let’s not make any mistake, Pakistan start the series as favourites, but for our ladies to come out of the series with something, they should utilise the home conditions at Harare Sports Club where the ball bounces more than in the subcontinent. If our senior players like Mary-Anne, Modester (Mupachikwa), Patience (Marange) and Chipo (Mugeri) come good with the bat, I’m sure our bowlers will defend any good score, or restrict them to a total our batters can chase.”

The three one-dayers will be played on February 11, 13, and 15 while the two T20Is will take place on February 18 and 20. The tour will be conducted in a bio-secure bubble with no spectators allowed at the match venue.

A wonderful opportunity to be branded a friend