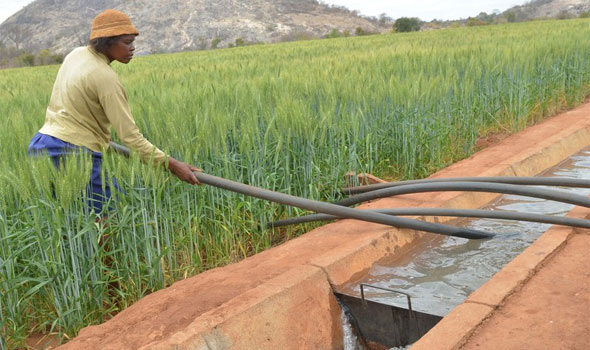 ZIMBABWE is expecting to harvest 190 000 metric tonnes of wheat, the highest in the 10 years, as government seeks to reduce the country’s import bill, Finance Minister Mthuli Ncube has said.
Zimbabwe’s cereal demand rose to 450 000 tonnes after 2015, from 400 000 tonnes, due to an increase in the population and changes in lifestyles.
Wheat is the second most important strategic food security crop in Zimbabwe after maize. The cereal has become a staple crop given the high demand for bread by the urban population. Wheat farming is a major cropping activity and the commodity is highly valued, particularly its product, bread.
“We want to stop importing food. We want to increase our output for wheat.  This year we want to harvest about 190 000 metric tonnes of wheat, the highest output in the last 10 years. So we can see the future. We have seen the import substitution taking place, especially in the food sector,” Ncube said during a meeting with MPs.
Experts say even if the country were to achieve the national requirement, it would still import wheat as the local crop cannot make quality bread due to conditions in which the cereal is grown under and is suitable only for making biscuits.
Most activities in the agricultural sector are carried out in summer when rains are available and temperatures are favourable for plant growth. However, crops such as wheat and barley and some horticultural crops are grown in winter.
The winter crops require cold weather for successful crop development and high productivity. Last year, Zimbabwe scaled down wheat production to 29 000 hectares from the initial target of 75 000 hectares for the 2019 winter wheat season due to crippling power outages. In 2018, Zimbabwe’s wheat output was 160 000 metric tonnes against national demand of 450 000 tonnes.
Agriculture is a critical sector, with official statistics showing that it is a source of livelihood to approximately 70% of the population, contributing between 15% and 20% of GDP and providing 40% of export earnings and supplying 63% of agro-industrial raw materials.
Turning to the horticultural sector, Ncube said the government is working on revamping the sector, which in the 1990s was a key source of foreign currency earnings.
“We want to have a budget for sustaining our horticulture sector. We used to be rated in exporting flowers and so forth in that industry. That industry has disappeared and it needs to come back,” the Finance Minister said.
— STAFF WRITER

Related Topics:AgricultureEconomyWheatZimbabwe
Up Next
Don't Miss