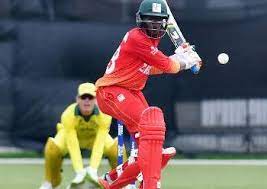 TOURING South “A” handed their Zimbabwean counterparts a thumping innings and 166-run defeat on Thursday in the first of two four-day matches in Harare.

Hoping to make amends after losing 3-1 in the one-day series, Zimbabwe “A” had made a promising start in the first innings.

The second-string Zimbabwean side was all-out for 344 with Milton Shumba (74) and Dion Myers (69) batting measuredly to resist a potent South Africa “A” bowling attack.

Fast bowler Daryn Dupavillon was the pick of the South Africans’ bowlers with figures of 5-69.

South Africa “A” captain Zubayr Hamza then smashed a double century while Sinethemba Qeshile hit a ton in twin innings that turned the game on its head at Harare Sports Club.

25-year-old right-hander Hamza, who has a highest Test score of 65 in five matches for the Proteas, feasted on a Zimbabwe “A” attack that lacked penetration, with rookie batsman Qeshile playing a supportive knock before the visitors declared their innings on 603 for four.

Hamza was undefeated on 222 while Qeshile was 124 not-out.

Returning for the second innings, the Zimbabweans were bowled out for a measly 93 runs, only Timycen Maruma defying with 33.

Pacers Glenton Stuurman and Dupavillon took three wickets apiece for SA “A” to make sure the tourists did not bat again.

The second and final four-dayer, the last match on the tour, will be played at Takashinga Cricket Club in Highfield starting on Sunday.