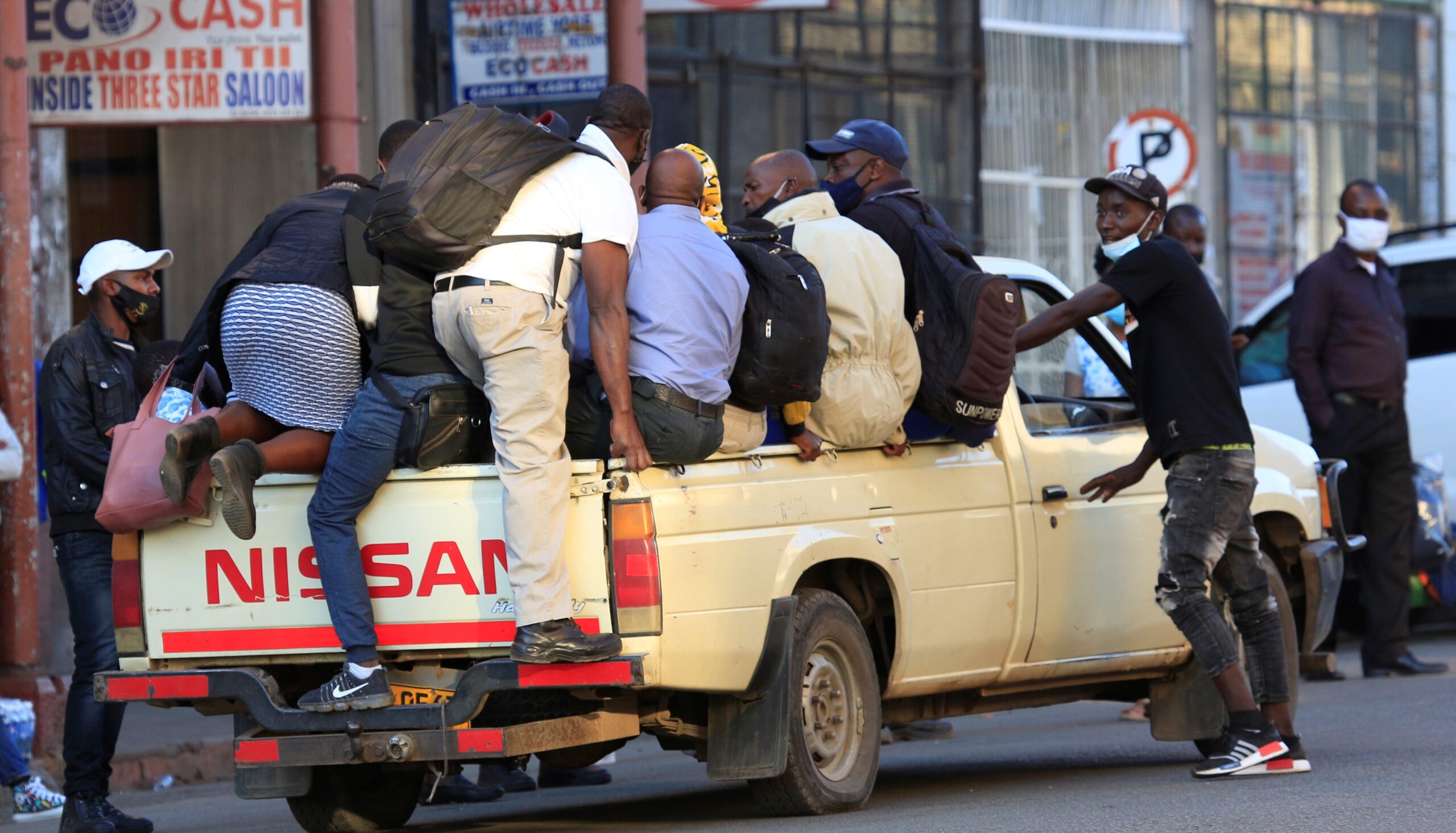 Commuters board an open truck due to lack of transport in Harare,Zimbabwe,01 July 2021. The government banned private commuter buses and it's own buses are failing to meet the demand .Commuters now have to leave the city early in order to beat the 6 :30 pm start of the curfew.

AS cars swarm the streets of Harare in an effort to beat the Covid-19 curfew-induced rush hour, Richard Tiritoga is oblivious to most vehicles passing in front of him. His keen eyes pay particular attention to “promising vehicles” which could transport him home.

An open truck is preferable.

At 3pm, the streets are already swarming with people eager to go home as cars stuck in traffic resemble factory assembly lines of different makes and models.

“I like open trucks because they are cheaper,” he says.

Like many commuters in Harare, he has been forced to settle for the cheaper option due to the state-owned bus company Zupco’s inability to provide enough buses to ferry people to and from town.

“As you can see, we are stuck here. If I go to the Charge Office (terminus), there are not enough buses to carry us all to Chitungwiza, which only leaves us with no choice but to seek transport here at Joina City (mall). The open trucks are actually a blessing to us because they charge ZW$50, which is all I can afford,” he says.

“I stay in Zengeza 3 and it is not easy going there in an open truck because Chitungwiza is more than 20km away from town. That is a distance you have to travel facing the brutal cold.”

As he narrates his challenges, Richard’s prayers are soon answered as a 90s-era Mazda B1800 pick-up truck stops close by.

It is suddenly open season as the truck is quickly filled by passengers eager to go home, with women ignoring the niceties of etiquette as they jump into the vehicle. Like other commuters, he springs into action.

Tiritoga is one of the lucky passengers. Settling into his spot in the truck came at a price after he was sworn at for stepping on someone’s foot as he jostled to hop onto the truck.

Someone else who hopes to replicate Richard’s “fortune” quickly replaces the very spot he was standing in just a few seconds before.

Charge Office, the terminus where Richard is supposed to find transport, resembles a refugee camp as people can be seen milling around in queues hoping to be whisked away by the few Zupco buses available.

Residents from the western suburbs are not spared this same fate as Copacabana terminus also resembles the Charge Office in both sheer multitudes and general despair at 4pm.

Zimbabwe is currently on Level Four lockdown due to the Covid-19 pandemic which has claimed almost 2 000 people.

The World Health Organisation (WHO) advises people to take simple precautions, such as wearing a mask and maintaining social distancing so as to curb the spread of the coronavirus.

However, the unavailability of adequate transport at designated terminuses has seen people risking their lives as they jostle for vehicles in crowded spaces.

Transport problems have worsened in many cities since the government banned private commuter omnibuses from operating in March last year, resulting in people spending hours in chaotic queues in disregard of social distancing.

One disturbing trend of Covid-19 has been the growing focus on “superspreader events” where even a single infection could cause a huge outbreak.

At the corner of Jason Moyo Avenue and Chinhoyi Street where commuters find cheaper transport to Warren Park and nearby suburbs, the intersection is teeming with people hoping to catch a lift on private cars.

The people here have no choice but to stare with undisguised envy at the few individuals who are lucky enough to be rescued by private motorists.

“I do not know what the government wants us to do, I came here because I cannot manage the queues at Copacabana today, if you go there now you will notice that there are very long queues and sometimes you even spend two hours just waiting for the bus to come. “Another reason which actually draws us here is the fare because if you look at the new fares you can easily notice that it is out of reach for many, we simply cannot afford it. Government should reduce these new Zupco fares so that transport, especially their kombis, become accessible to people,” said Miriam Mufanebadza a Warren Park One resident.

A tour of the Simon Muzenda Street (formerly Fourth) and Market Square terminuses also revealed that people were struggling to get transport with the majority opting to go to undesignated pick-up points along Robert Mugabe Street and Fidel Castro Road (formerly Charter).

Some desperate commuters were even walking from the Market Square rank to the Simon Mazorodze Road flyover with the hope of getting transport to southern suburbs like Glen View and Glen Norah.

Passengers earlier this week expressed outrage over Zupco’s recently doubled fares that are out of the reach of many, especially at a time the government has imposed a tough Level Four lockdown.

The old ZW$30 bus routes like Warren Park and Sunningdale have doubled to ZW$60 while the old ZW$45 bus routes shot up to ZW$90.

The Zupco kombis, which service shorter routes and used to charge ZW$60, are now charging ZW$80 with the longer routes costing ZW$120, up from ZW$90.

Meanwhile, pirate kombis, also known as mushika-shika have been cashing in on Zupco’s shortcomings by operating secretly so as to avoid trouble with the police who have mercilessly cracked down on kombis and taxis not aligned with the parastatal.

In a bid to avoid the police, the mushika-shika typically park about 300 metres away from crowded commuters. A tout employed by the driver then shepherds a couple of people from the crowd to the nearby vehicle in exchange for a small fee.

“We do not have enough transport in urban areas and people are actually struggling, especially in Harare. We did a survey and found out that independent operators who are not allowed to operate are ferrying 59% of the passengers in Harare and Zupco is ferrying around 41% so this actually shows that we have a serious crisis.

“The problem with the (Zupco) monopoly is that we are not served on time, they do what they want. Nothing has changed for us, people are still  being ferried by these pirate taxis all over Zimbabwe,” he said.

He also challenged the government to address the issue of un-roadworthy vehicles being used by Zupco.

“Government must call all stakeholders, the passengers must be involved, the Central Vehicle Registry (CVR) must be involved because we also have a lot of un-roadworthy vehicles which are being hired by Zupco. 75% of Zupco’s buses are un-roadworthy and these actually pose a danger to passengers,” he said. Goliath also said poor planning for the overcrowding at bus terminuses were potential superspreaders.

“We do not support the overcrowding of people at pick-up points, this is also a problem which is found in bus ranks and this is against WHO guidelines on Covid-19.

“You do not have to blame passengers but you have to blame the department of Physical Planning, they are the ones who do most of the planning because it is quite evident that we need more busses. So this crowding for transport is a superspreader because Zupco is spreading Covid,” he said.

Zupco was founded in 1980. Before Independence, the bus company was known as the Rhodesia Bus Company. After transition, the company was renamed to the Zimbabwe United Passenger Company and, by 1993, Zupco was operating 1 200 buses on 426 routes.

However, the parastatal has since been reduced to a pale shadow of its former self due to its failure to provide reliable transport in the urban sector, let alone rural areas.

Last year, the government opened the Zupco franchise to handpicked private transporters, but urban commuters are suffering immensely in their hunt for transport.

Mother recalls the day when her newborn baby was stolen