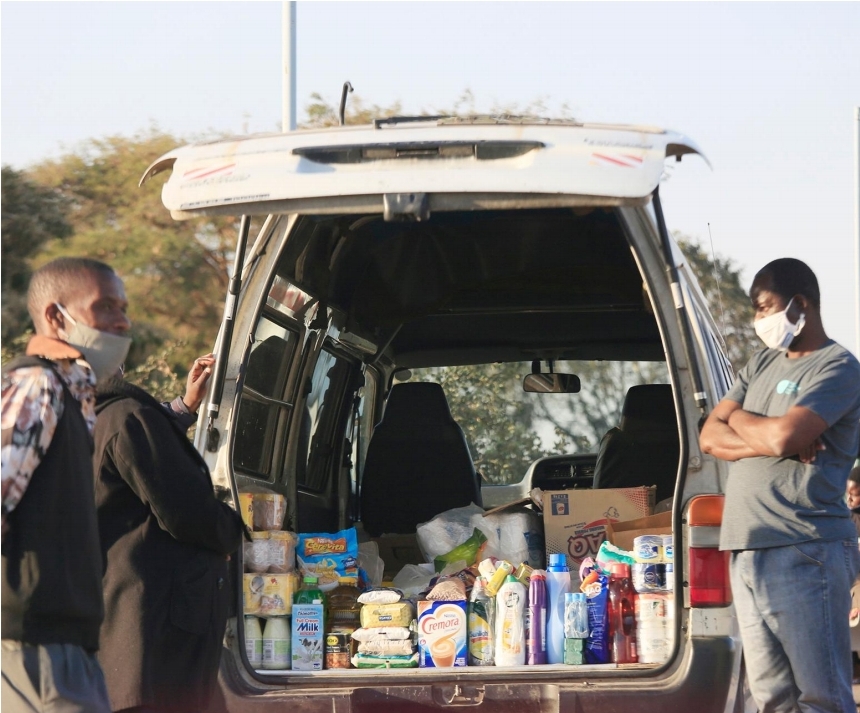 IT IS almost sunset on a chilly winter’s afternoon and some people are exiting a popular supermarket in Harare’s Mabelreign suburb while others look disappointed after failing to make it on time for shopping.

After enduring the first national Covid-19 lockdown in 2020, many are now accustomed to the drill: those in queues must maintain a safe distance of one metre apart, get their body temperature checked by the shop assistant who then sprays hand sanitiser and they are good to go.

Momentarily, a few cars are seen pulling over and, before long, car boots are opened and business commences again. The boots are full of agricultural commodities being sold to passersby. Some cars are discretely selling alcoholic beverages as police officers ensure that bars remain closed.

For some astute traders, social media platforms have become marketing tools for selling goods that many cannot buy when shops close at 3pm in line with the Covid-19 restrictions.

The Reserve Bank of Zimbabwe last year relaxed its exchange control allowing the public to use hard currencies to buy basic commodities. Many retailers — formal and informal — are now mopping the few United States dollars during this lockdown.

A week after President Emmerson Mnangagwa announced a new two-week lockdown to slow the spread of the coronavirus, the pandemic appears to have been a boon for backyard businesses and boot sales.

While Harare’s central business district is typically deserted after 6pm, some shrewd informal traders are making a killing in townships and neighbourhoods under the cover of darkness.

Soldiers, who in the past were manning checkpoints, are now taking a lesser role as municipal police take over. For vendors with no cars to sell their wares, running battles with authorities have become the order of the day.

Last year, the High Court ordered the security services to stop assaulting citizens during the lockdown.

With property owners not extending any reprieve to the long-suffering Zimbabweans, hustling and moonlighting has become the only way to eke out a living.

On Tuesday, the government introduced further restrictions when it announced that non-essential workers getting into town will, with immediate effect, b e required to present exemption letters of travel at Covid-19 security checkpoints as the authorities tighten restrictions to slow down the spread of the disease, the  Information minister Monica Mutsvangwa has announced.

The country is battling a third wave of infections which has seen fatalities also surging in the past few weeks.
Mutsvangwa said the cabinet resolved to introduce stringent measures due to high levels of complacency in observing World Health Organisation protocols.

“Cabinet has directed that the Treasury urgently releases the first tranche of ZW$368.2 million it had committed towards funding the enforcement of Level 4 lockdown measures,” said Mutsvangwa.

Samuel Wadzai, Vendors Initiative for Social and Economic Transformation leader, says vendors who are not covered by the government’s social safety nets continue to bear the brunt of economic turmoil caused by lockdowns.

“The fact that we are unable to go to markets and operate means reduced income. Already, we are coming from a situation where most Informal traders were struggling to restock after the initial lockdowns and this latest one has simply exacerbated our plight,” Wadzai said.

“We are further witnessing that the demolitions that are being conducted by local authorities have caused a lot of suffering for the already crippled informal sector. What is needed is an inclusive approach in addressing the challenges being faced by players in the sector not demolition of markets.

“The government needs to come in and inject money into the informal sector and assist players in the sector to rekindle their operations. It is our considered belief that social security for the informal sector should not be done through haphazard piecemeal interventions that are not guided by policy, as they are then subject to abuse and patronage due to the lack of safeguards. We have in the past tabled a policy paper on a comprehensive social security scheme proposal for the informal sector and have availed ourselves for consultations with Minister Mavima’s ministry, something we hope he will take us up on.”

The World Bank this year sees the Zimbabwean economy recovering from two years of contraction which was triggered by an El Ninõ-induced drought and Covid-19. Zimbabwe is experiencing a third wave of Covid-19 infections and the country has for nearly three weeks been recording double-digit fatalities.

The recovery rate stands at 74%, with 97% of Covid-19 positive cases being attributable to local transmission. The number of active cases stands at 12 357.

This represents a 107% increase. As you might be aware the entire country is now under Level 4 lockdown, following the surge in Covid-19 cases.