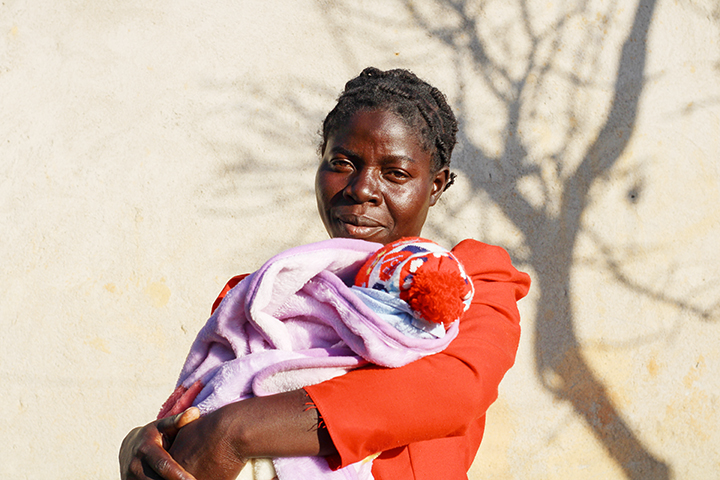 EMMA Monde (35) sits on a wooden stool in the corner of a three-roomed house as she washes her baby’s clothes, while two of her minor children play with other youngsters nearby.

She is uneasy. Monde (pictured) constantly checks on her two-year-old daughter, sleeping in the room.

In between play, her eldest daughter also attends to the baby who is sleeping soundly on the cold morning.

The unease is palpable and Monde has good reason to be on edge. She is haunted by the traumatic experience of almost losing her baby to a cunning thief last month, on the very day she gave birth.

The mother-of-three reminisces how she lost her one-year-old baby in August last year after a short illness.

On 24 July, Monde suffered another traumatic loss when her baby was stolen by a stranger, suspected to be a child trafficker.

The baby snatcher, Christina Gwashavanhu, made headline news after she was caught by an alert security guard as she tried escaping with the newborn baby from Epworth Polyclinic.

Gwashavanhu had disguised herself as a nurse to gain access to the child.

Clad in nurse uniform and a cap, she sneaked in and grabbed the newborn as Monde slept, recovering from labour fatigue.

A teary Monde said: “When the nurses told me that my baby was almost stolen, I could not even stand, one of the nurses had to give me somewhere to seat because I was in shock.”

Her husband, Aleck Musakari (40), broke down when he watched a video showing Gwashavanhu explaining how she had stolen the baby.

“It was so painful because I had just lost another child recently, and now I was thinking that I have given birth to another one and this happens,” Monde said.

Monde never imagined that one day she would almost lose her baby to child traffickers.

“I felt so much pain after hearing that she wanted to inject the baby and cut the head so that she could get a commuter omnibus from the buyers. I can only thank God that this woman was caught,” Monde said.

“The baby was named Zvikomborero by the nurses because they believe she is truly a blessing.”

Still shaken, Monde explains how the incident has created a rift with some family members, who believe she has bad luck.

She however cherishes her husband’s support throughout the ordeal.

“They (husband’s relatives) are saying I should go back to the village since they believe this is happening because I must have done something wrong and that there is no one manning our homestead.”

Despite the painful ordeal, Monde is grateful to God for protecting her child. Musakari also believes the child is safe owing to divine grace.

“We just pray to God that he helps us through this problem because things have turned sour for us, but we just put it all to God,” Musakari said.

The story has left her neighbours and the wider Epworth community shell-shocked.

After hearing that she had given birth safely, the neighbours were stunned as news of her baby’s theft filtered through.

“I got so relieved when I heard that she had delivered after losing another child, but the news came as a shock when we heard that she almost lost the baby,” said one neighbour, identified as Mbuya Jealousy.

“We do not even know how we can protect our children from these kinds of cases so it is best that she is given a life sentence and others who commit the same crime should not be brought be back to the community”.

Cases of child kidnapping and ritual murders have been rampant in Zimbabwe, with some found decapitated.

He lost his life allegedly at the hands of close relatives that he trusted.

Tapiwa went missing in September, last year as he tended to his parents’ garden. His torso was found the following morning, with some parts, including the head, missing.

Six suspects, including relatives, were arrested while others were questioned in connection with the kidnapping and murder.

The killers and their accomplices abducted the boy, took him to a mountain before murdering him and then chopping off his head, arms and legs at night.

At least 1.2 million cases of child trafficking are recorded every year across the globe.

In November last year, the police rescued two children in the company of a woman who is believed to have escaped into South Africa.

The Zimbabwean state is captured