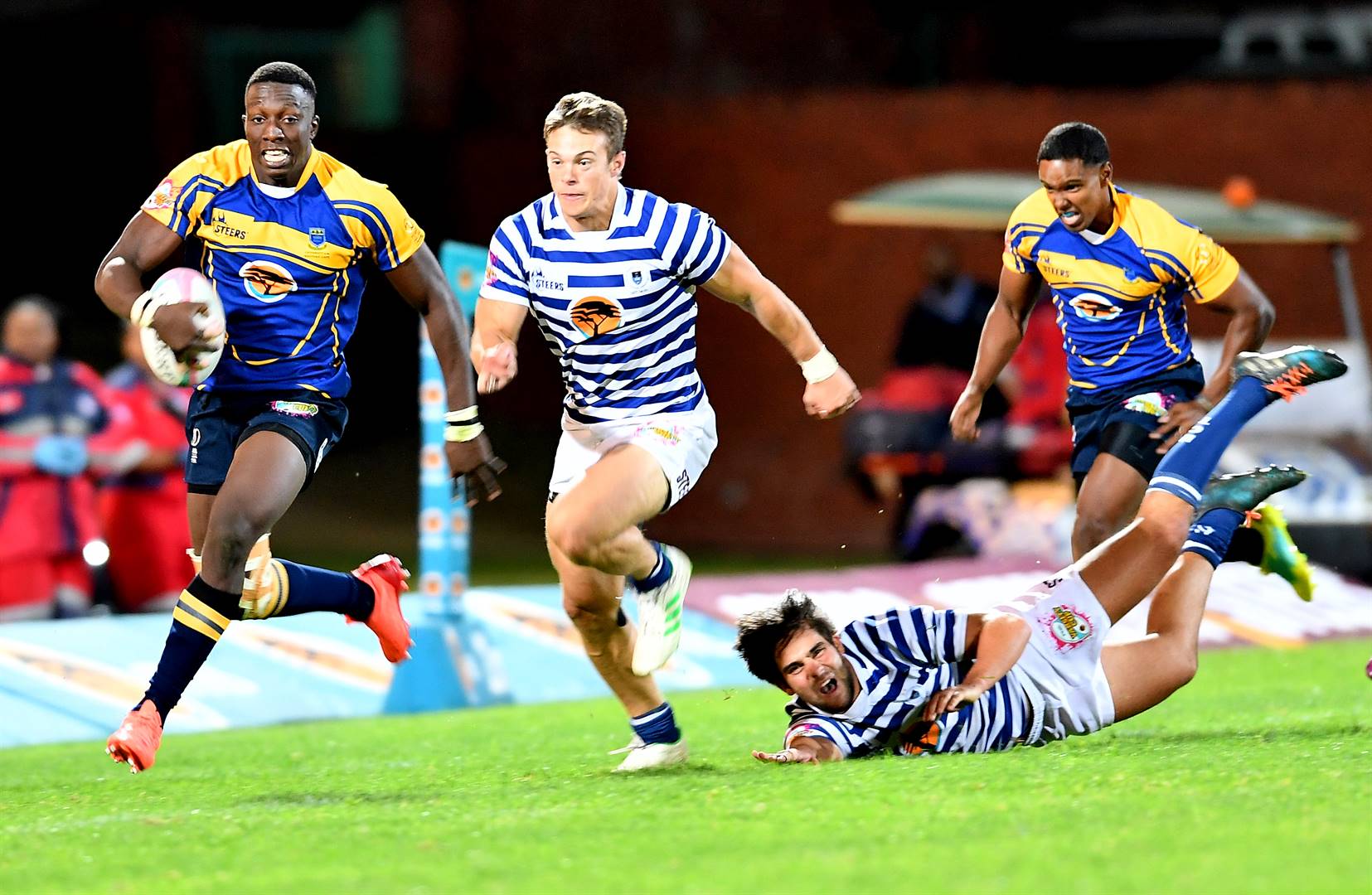 Tinotenda Mavesere (with ball) had a stellar debut season in the Varsity Cup for the University of Western Cape.

The young Zimbabwean watched the final against England on TV from his parents’ home in Kadoma, a small mining town 166-km southwest of Harare on the highway to Bulawayo.

Mavesere was a big fan of the history-making Springboks skipper, a loose-forward like himself. He will likely forever remain a fan, but there is one difference now: they are now teammates.

The last three years have been a real life-changing experience for the 23-year-old flank, who earned himself a scholarship at the University of Western Cape after an impressive debut international season with Zimbabwe in 2019.

It has not taken long for Mavesere to convince Sharks head coach Sean Everett. This week, the Sables star was included in the Sharks’ 50-man squad for the 2022-23 Vodacom United Rugby Championship, despite still recovering from injury.

The United Rugby Championship is a rugby union competition involving teams from South Africa, Ireland, Scotland and Wales – following the demise of the Super Rugby competition.

At Sharks, Mavesere will be in illustrious company. In addition to Kolisi, he will share the dressing room with five other Bok World Cup-winning heroes: Lukhanyo Am, Makazole Mapimpi, Thomas du Toit, Eben Etzebeth and Bongi Mbonambi.

Pity, Mavesere will not be teammates with his hero from home and another member of the World Cup glory, Tendai “Beast” Mtawarira, the Sharks legend who retired from all forms of rugby in South Africa after the Japan conquest.

Like his role model, Mavesere – better known back home by his middle name Blithe – has walked an almost similar path from Zimbabwe to end up at Sharks, both initially arriving in KwaZulu-Natal as loose-forwards. They both learnt their rugby at Harare’s sporty Churchill Boys High School, although Mtawarira later won a sports bursary to Peterhouse College, a prestigious private school 72-km east of Zimbabwe’s capital city.

Had Mtawarira hung on for much longer at Sharks, young Mavesere would have told him of an unfortunate but rather comical high school experience of his in which he landed in hot soup after trying to “steal” the Bok legend’s world-famous nickname.

“He is a fantastic kid, he never got into trouble, but on this one occasion I caned him for calling himself Beast,” Jeff Madhake, Churchill’s fiercely passionate rugby coach, told The NewsHawks this week.

“He didn’t realise I was there, so I said ‘do not disrespect the name of a man who has made it, work hard and find your own name. Your name is Blithe Mavesere.’ So I said ‘come here, I’m going to hit you for that’. I know ‘hit’ sounds terrible, that’ why I use the word ‘cane’. I said ‘you can’t take shortcuts in life’. That’s what I tell all the kids at this great school of ours, that’s why I have produced so many (Zimbabwe) national team players. Work hard and earn it. These days they call him ‘Driller’ because he comes from the mines in Kadoma, where there is a lot of drilling. And also because when he plays, it’s like he is drilling.”

Madhake is 52 now, a strict disciplinarian who lives and breathes Churchill, also his former school. Back in 1987, he was the first black captain of Churchill’s first rugby team, the Bulldogs, and was selected into a strong Zimbabwe Schools side, a massive achievement for a player of colour in those days.

Churchill, a government school, is today a blend of middle to lower class boys, both boarders and day-scholars. Madhake’s greatest passion and biggest reward is to make the students and sportsmen of Churchill the best they can be, and he encourages them to transform not only their lives but also their families.

A tall and muscular man, when Madhake is not coaching, he is seen casually moving around the schoolyard with swag, in shorts and trainers, happily chatting to all the pupils he meets, who all remove their hats in greeting. The boys are in absolute awe of the man, a legend of their school. They do not fear him; they respect him.

But Madhake also shows his strict side, when necessary, as Mavesere also found out again after the ‘Beast’ nickname mishap.

“I caned him for wearing a Zim Under-21 tie when he was not in the team. He had borrowed it,” Madhake quipped.

“I said ‘you can’t value it when you have already wore it without earning it. You need to earn your tie. I earned mine for Zim Schools back in the days, and I believe you can be one of the best players in the world’. So I canned him for that.”

Madhake’s approach to mentoring Mavesere is understandable when you hear of the relations between the two.

“I’ve been friends with his dad before he was even born,” said Madhake.

“When he didn’t do so well in his Grade Seven exams, his father asked me if he could bring him over to Harare, to Churchill, so that I could monitor him. He was a good all-round sportsman, he also played cricket. I said let’s focus on rugby. So he captained the first team a few years ago. And he played for Pitbulls, a club I formed with a few mates of mine. Then the guys at University of Western Cape got in touch with me inquiring about him.”

Madhake still manages Mavesere, and he believes he has a good head on his shoulders to forge a successful career following the Sharks move.

“Tell you what, he’s a lovely kid,” added Madhake. “He’s down-to-earth and God-fearing. He doesn’t drink, he doesn’t smoke. He’s got a fantastic engine. He puts maximum effort, even academically. That’s why his father handed him over to me. Because these days you cannot play rugby without a degree, so we wanted him to pass his ‘A’ levels.”

Unlike Mtawarira, though, Mavesere is a Zimbabwe international. Maybe he might one day be persuaded to go the Springboks route, courtesy of the new qualification laws that allows players to switch international allegiance after a stand-down period of four years.

But asked if his protégé will consider that option, Madhake did not want to make the call.

“I don’t know,” he replied. “We wanted him to play for Zimbabwe and support our country, and also support our (Zimbabwe national team) coach Brendan Dawson because he is the one who gave Driller the platform to be seen. And in sport, loyalty is everything, you have to be loyal to the people that helped you up.”

And few men are more qualified to talk about loyalty than Madhake.

Some casualties in World Cup squad, it can’t be business as usual