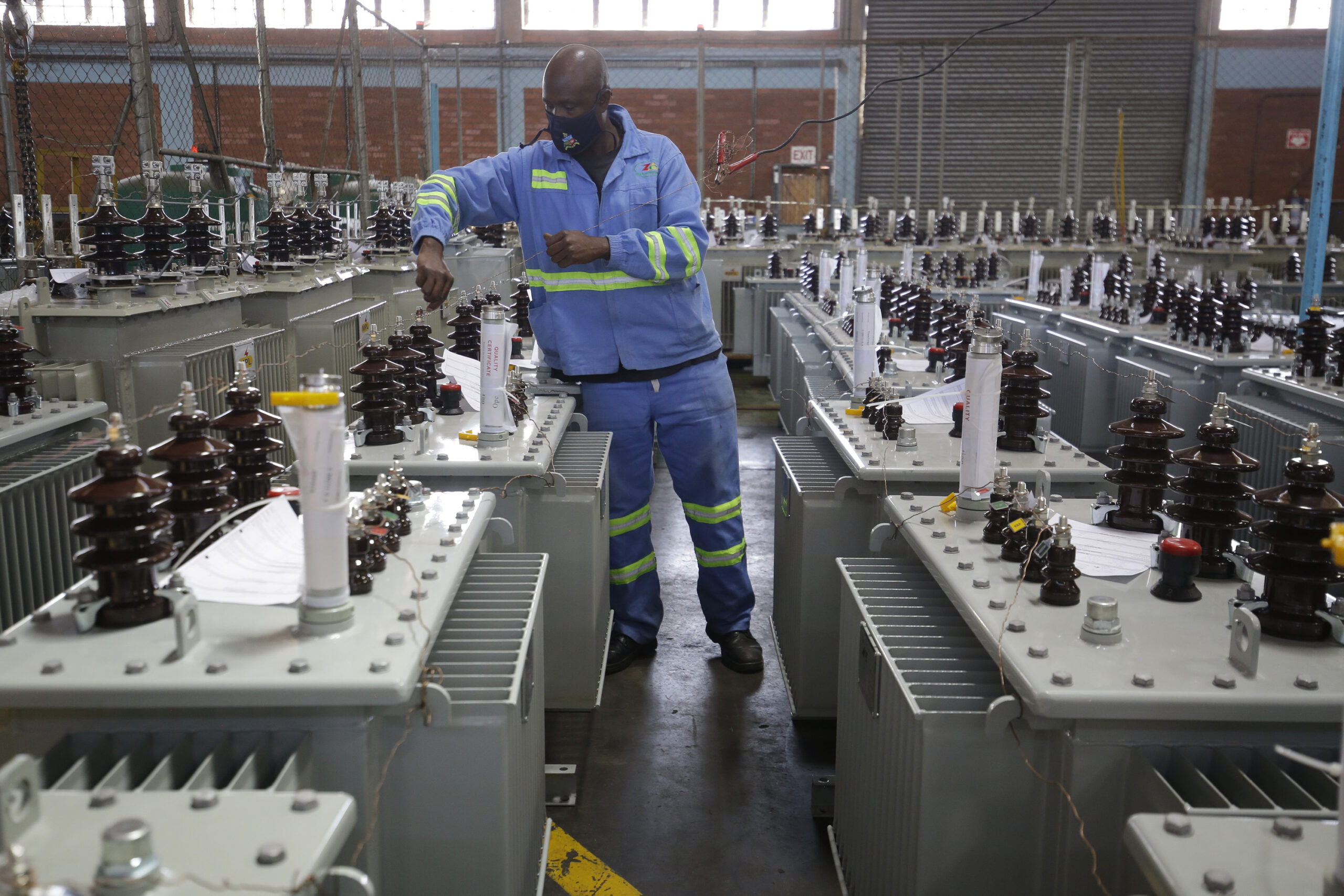 A worker is seen at working as he assembles an electricity transformer at Zesa Enterprises Private Limited (Zent) factory in Harare,Zimbabwe,18 May 2022.The company is manufacturing between 250 and 300 transformers thereby serving the country foreign currency.The country currently has a deficit of over 300 000 transformers.

TOP government officials, critical security establishments, including police stations and ministry departments, were left in the dark last week after the country’s power utility, Zesa, switched them off in an attempt to recover US$62 million owed by exporting companies and ZW$17 billion by ordinary consumers.

The NewsHawks, after reporting on the blitz last week, established that several farms, some owned by government and politically connected individuals who were notorious for not paying for electricity were switched off. All along, they were being shielded from load shedding, but the blitz exposed how the bigwigs have not been paying for services rendered by parastatals.

Zesa executive chairperson Sydney Gata confirmed the blitz in a speech at the handover of vehicles in Harare,  but would not disclose those who were left in the dark. However, sources confirmed that government officials, councils, institutions and some police stations were affected.

“In as much as we try to capacitate the business, break even and deliver excellent quality service, we are owed US$62 million and ZW$17 billion by customers,” Gata said.

“We have since embarked on an aggressive debt collection blitz to recover what is owed to us. Just this past weekend, we disconnected various defaulters.”

This comes amid reports that local authorities are also planning a similar blitz, with

It emerged that of late, the power utility’s load shedding was not affecting powerful people, including politicians whose businesses consume a lot of electricity, while it affected lower-end power users.

“The challenge is that we are now in serious competition with other countries that rely on the Southern African Power Pool (SAPP) for power. With Mozambique and Zambia generating much of the power, they now need payments upfront,” a local engineer told The NewsHawks this week.

No official comment could be immediately obtained from Zesa, but it emerged several police stations in Harare experienced blackouts.

“Some of the police stations and camps where staff stay were switched off over what we were told was non-payment of electricity bills,” a police insider said.

Local authorities, including Chinhoyi, Marondera and Kadoma, were also targeted and are said to have since made payment plans.

Observers have condemned government officials, institutions, parastatals and politically connected individuals for not paying their dues. The culture of getting electricity for free hampers Zesa from operating as a business, which worsens the power crisis.

Gata said Zesa will no longer charge mining houses tariffs below cost of production as the company is struggling to service a “ballooning power import debt”.

“Zesa will no longer be able to continue supplying electricity to exporting customers at USc9.86 as it is unsustainable,” Gata said in justifying the move that led to the blitz which saw several firms switched off.

The southern African country generates an average 1 200-1 300 megawatts of its own electricity and relies on imports from Zambia, South Africa and Mozambique to cover shortfalls.

Last week, Zambia’s Energy minister Peter Kapala said his government had entered into a deal with Zesa that will run for five years and will see Zimbabwe making pre-payments for the 100 megawatts which will come from Kafue Gorge Lower.

The Zambian minister said Zimbabwe is currently facing a critical shortage of power which has been worsened by depressed generation at Hwange and Harare thermal power stations.