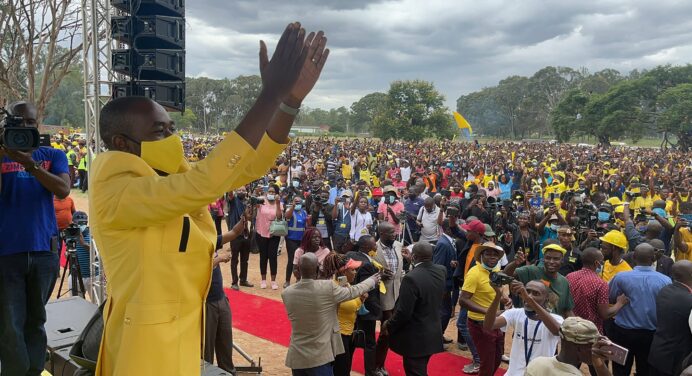 CITIZENS’ Coalition for Change (CCC) leader Nelson Chamisa says the ruling Zanu PF is in panic mode and resorting to terror as shown by the involvement of cabinet ministers in the violent attacks which rocked Gokwe-Kabuyuni and left several people injured this week.

Journalists were also caught in the violence, with four media professionals sustaining injuries alongside dozens of CCC activists.

Chamisa told a Press conference on Friday that what he witnessed in Gokwe and Mashonaland East was disturbing as Zanu PF was mobilising terror campaigns and declaring no-go areas for the opposition.

“What l saw in Gokwe is disturbing,” Chamisa said. “lt is not peculiar to Gokwe, I saw this in Mashonaland East, in Uzumba, in Mutoko, in Hwedza and many other places.”
“Just today (Friday), I was told they were beating drums, dancing and declaring that this is a no-go area for Chamisa.”

“There is unprecedented violence, terror and people not allowed to freely associate,” he said.
Chamisa said Local Government minister July Moyo and his Midlands counterpart Larry Mavima were part of those who coordinated the terror.

The two ministers could not immediately comment on Chamisa’s allegations.

“l was shocked July  Moyo, Larry Mavima and others were around  and actually organising some of the things that happened there while also imposing themselves on the police.”

Chamisa said the intimidation of opposition supporters was worsening, but urged them not to expose themselves to merchants of violence.

He advised opposition members to resort to “the mango strategy” by wearing Zanu PF T-shirts when their lives are at stake, but proceed to vote CCC on polling day.

“Let us go the mango strategy; be yellow inside, green outside. All you have to know is where to vote.”

“They want to push us to resort to violence and justify terror, justify declaring a state of emergency. Like what Tsvangirai said, I will not walk to State House on top of dead bodies.”
He said Mnangagwa was acting like his biggest campaign manager by mentioning him at his every public address.

On the arbitrary arrests, prolonged detention without trial and denial of bail to CCC activists, Chamisa likened Mnangagwa’s behaviour to that of Rhodesian prime minister Ian Smith during the colonial era.

On shrill calls by Zanu PF and its political surrogates for CCC to form clearly defined “structures”, Chamisa said: “Why are you so generous to want your opponent to have structures? Why demand our structures? We will beat you structureless.”