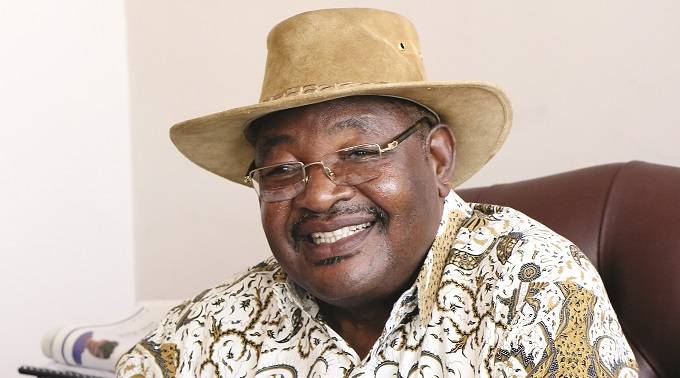 “LOBENGULA comes back as secretary for administration,” Zanu PF leader, President Emmerson Mnangagwa announced on 29 October as he appointed the ruling party’s top leadership at the recent congress at Rainbow Towers Hotel in Harare.

Only the Zanu PF leader is elected in the top pecking order. The rest are appointed by him.

Mnangagwa was referring to Zanu PF secretary for administration Obert Mpofu (pictured) when he said that. Mpofu’s nickname is Lobengula from way back due to his self-described status in the party and his home Matabeleland region

. Lobengula was 19th century Ndebele King who was the defacto ruler of Zimbabwe from 1870, before he was toppled by the colonial invaders in 1893 during the Anglo-Ndebele War prior to the 1896 Ndebele-Shona uprising following the 1890 Pioneer Column invasion.

This is the leadership that Zanu PF installed after the coup that overthrew the late former president Robert Mugabe. Except Chiwenga and Mpofu, the rest of these appointed party officials support Mnangagwa, according Zanu PF insiders.

These appointments followed a tense 45-minute consultation break between Mnangagwa and senior Zanu PF officials — Chiwenga, Mohadi and Muchinguri-Kashiri — during the congress. The names of the leaders, except the party presidium, were announced after consultations.

This showed that party leaders agreed after the engagement the coup party hierarchy should be maintained. As a result, the coup status quo prevailed, which from a different perspective suggests a standoff in the protracted internal power struggle.

This was despite the fact that Mnangagwa had in the political scheme of things brought his bitter rival Chiwenga to his knees — both literally and metaphorically — at the congress. However, Chiwenga and his allies say while they maybe down they are not out.

They believe that although Mnangagwa might have emerged victorious, he remains vulnerable to pressure for change. Mnangagwa and Chiwenga are locked in a fierce battle for the control of the heart and soul of the Zanu PF to rule Zimbabwe.

There is overwhelming evidence to prove that. After a brutal political tussle following the 2017 coup which propelled Mnangagwa to power, characterised by plotting, internal strife, purges, poisoning and a grenade attack amid dead bodies, Chiwenga was undeniably crushed at congress. His defeat and surrender — at least for now — was clearly symbolised by his kneeling before Mnangagwa at congress which he never used to do soon after the coup when he called the shots.

Those who spoke to The NewsHawks found the kneeling symbolic of defeat not withstanding attempts to spin it as a tactical retreat.

“That summarised the key outcome of the congress; Mnangagwa emerged triumphant and Chiwenga defeated, given their power relations in 2017 and the power shift now,” one delegate said.

“This is not to say Chiwenga is down and out This means he is down, but not out. The fact of the matter is simply that he was routed at congress and needs to retreat and regroup.”

Chiwenga himself accepted the trouncing, going as far as claiming leaders are ordained by God. He implied Mnangagwa, whom he once claimed was the great Munhumutapa (historical Shona-speaking people’s monarch), had the divine right to rule.

Said Chiwenga: “The party membership, through its structures and leagues, has already clearly and thunderously endorsed Cde Emmerson Dambudzo Mnangagwa as the president and first secretary, and as the sole presidential candidate for the ruling party, Zanu PF, in the 2023 harmonised elections. People have thus spoken.”

Singing praises of Mnangagwa, he added: “He is the one and only candidate that we know.”

This was a far cry from his plan in 2017 during the coup when he ruled the roost. Chiwenga’s strategy was to install Mnangagwa as President for five years, and then take over in 2023. This was part of the military plan to then keep power within their structures and among themselves.

He also took over the defence and war veterans portfolios that Mnangagwa had initially given to Mohadi who was briefly put in charge of security. Muchinguri-Kashiri was later appeased through an appointment as party chair, a position which she retained at congress.

Mohadi, who helped checkmate Chiwenga during the bruising power struggle, threw his weight behind Mnangagwa in his congress address. Mnangagwa lightheartedly described Mohadi as “naughty” — a reference to his scandalous sex indiscretions — but said he is dependable and useful.

He said Mohadi is also an honest leader as he is the only one who has repeatedly told him in his face that he wants to be president.

Good-homouredly, Mnangagwa said if Mohadi wants to be president he must first survive a sustained campaign of vilification and threats, poisoning, expulsion, walking 40 kilometres and then a dramatic recovery from that, which was a description of his own rise to power under Mugabe’s last days.

Mnangagwa also appointed a limited number of members of the politburo members and 10 new central committee officials who are his personal nominees. The move is calculated to cement his control of the party.

Mabel Chinomona remained in charge of the women’s league and Douglas Mahiya the war veterans league. Mnangagwa is also restructuring the politburo portfolios, creating new ones, while also coming up with an elders’ council structure.

He is yet to appoint the politburo, a key structure of the party. Chiwenga’s supporters claim the elders’ council is evidence that their ally is still powerful and influential as that demand came from the coup leaders in 2017, but it is another pro-Mnangagwa structure.

In yet another indication of his power in 2017, Chiwenga stopped Mnangagwa from appointing Victor Matematanda, now ambassador to Mozambique, as political commissar.

He put retired Lieutenant-General Engelbert Rugeje, who was later removed after the 2018 elections. Rugeje is a key Chiwenga ally, who challenged Mnangagwa’s purges and new modus operandi at a charged politburo meeting in July 2019.

Chiwenga and the army also ran internal Zanu PF elections in 2018, including the national polls. However, that power is no longer intact for Chiwenga. Mnangagwa arrived at congress, having put his ducks in a row through the district coordinating committee, provincial and central committee elections, as well as cells.

Chiwenga struggled to even get nominated in his Mashonaland East province. At the congress, Mnangagwa’s support — perhaps stage-managed — was thunderously evident in song.

For instance, his home Midlands province was singing “Munomuvengereyi Mnangagwa?” which literally means “Why do you hate Mnangagwa?”

The song caught fire as the venue erupted into a cacophony, burying Chiwenga and his faction under an avalanche of Mnangagwa’s internal support among the 4 000 delegates. However, insiders said Chiwenga is down, but not out.

One delegate said: “It would be unwise for ED (Mnangagwa) and his supporters to think Chiwenga is down and out. He is down, but not out.

The question here is: What next for him? Chiwenga still has strong residual support in the party and military. He has retreated, but will regroup, perhaps starting with Bhora musango [internal sabotage] during the upcoming general elections. It’s not yet over till it’s over.

“At the end of the day, the unresolved leadership issue in Zanu PF still remains as long as there is a top leader who believes he was betrayed and needs to recover his lost ground and seize power.”

Closing the congress, Mnangagwa said: “Our party is more united as we march forward in building our country, leaving no one and no place behind. As we approach the 2023 elections, we must remain in sync and encourage our members to register to vote.”