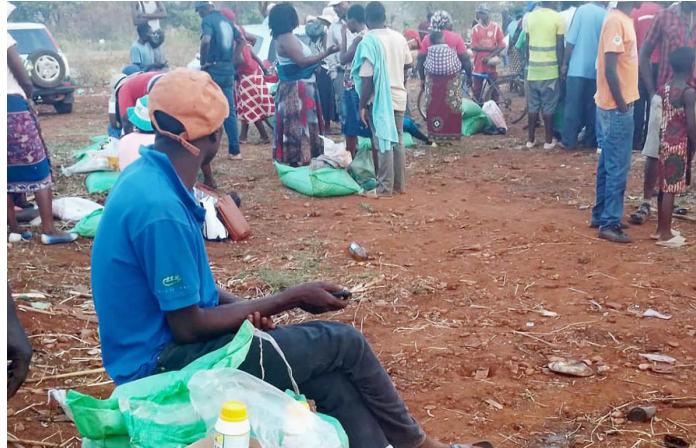 A MEMBER of the opposition Citizens’ Coalition for Change (CCC) in Zaka, Tafara Chimwaradze, was on Monday briefly abducted and assaulted by known Central Intelligence Organisation operatives while attending a presidential inputs scheme event at Chinorumba School.

The development comes at a time when cases of political violence and incidents of abuse of the Pfumvudza inputs scheme are on the increase in Masvingo province.

Chimwaradze was approached by two known CIO operatives after the meeting which was addressed by deputy minister of Agriculture Davies Marapira.

The two state spies accused him of openly raising his hand declaring that he was not going to vote for Zanu PF in 2023.

They forced him to board their vehicle at Chinorumba shops and went with him to Zaka Business Centre where they asked him to take off his shirt and shoes before taking turns to assault him, accusing him of being a CCC activist.

Speaking to The NewsHawks, Chimwaradze said he was  living in fear after the operatives asked him to leave Zaka district. He said he never raised his hand at the meeting, but the operatives had information that he is a CCC activist.

“On Monday I went to Chinorumba for the Pfumvudza event to collect seed. The meeting was addressed by Marapira who later asked people to indicate by raising their hands if they will vote or not vote for Zanu PF. I was standing balancing by hand on a rope. After the meeting I was approached by two guys who accused me of raising my hand indicating I was not going to vote for Zanu PF. They asked my level of education and I told them that I am a university graduate and that is when they asked if I belonged to Zinasu or Zicosu during my university time. They then said I am a member of the CCC and asked me more about the CCC. They then left me alone.

“After some minutes different guys came to me and asked me to board their vehicle and at first I refused, but I was clapped on my face before I complied. They drove to Zaka shops where they asked me to remove my shirt and shoes before they took turns to assault me, asking about the structure of CCC leadership in Zaka and urged me to give them information after every CCC meeting. They threatened to kill me if I remain in Zaka. They then dropped me some few kilometres before Jerera Growth Point and it was late in the afternoon.”

Zaka Rural District Council ward 19 councillor Peter Imbayarwo, who is a CCC senior leader in Zaka, confirmed the incident to The NewsHawks, saying the CIO operatives who assaulted Chimwaradze are known and stationed at Jerera Growth Point.

He said after receiving news that the CCC activist had been seized by the operatives, he phoned one of the state spies who told him that they had released Chimwaridze along the Zaka-Jerera road.

“I made a follow-up with the guys after hearing that one of our youths was taken and he told me about his release. These agents and Zanu PF activists are angry about how we are operating without structures. We are making inroads and they are not aware of our strategies and the people involved, that is why they are now resorting to violence of this nature,” said Imbayarwo.

In most parts of Masvingo, farm inputs bought by the government are being distributed by ruling party activists on partisan lines, with opposition members barred from benefitting from the programme. This is done in full view of government officials, who usually play a subservient role to Zanu PF activists during the distribution of inputs.

Another weekend behind bars for Sikhala