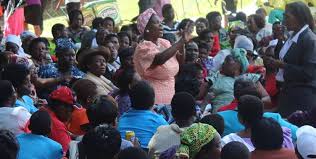 ONLY 16 female aspiring councillors will take part in by-elections slated for 26 March compared to a total of 64 male candidates who are vying for posts in the same polls.

The development comes at a time a lot of advocacy has been directed towards having significant representation of women in political spaces.

While the constitution requires all political parties to meet gender parity and avail equal opportunity, the political terrain in Zimbabwe has remained male dominated.

The MDC-Alliance party has the highest number of female candidates (six) followed by Zanu PF which has four.

The recently formed Citizens’ Coalition For Change party has two, the Patriotic Zimbabwean party and LEAD have a candidate each and the two remaining candidates are independents.

Speaking to The NewsHawks on why the Citizens’ Coalition For Change (CCC) has only two female candidates in Harare’s local authority by-elections, the CCC’s deputy national secretary for elections, Ellen Shiriyedenga, attributed the move to the mistake the party made in 2018 which saw them have a lot of male candidates.

She said most councillors were later recalled, but were contesting to reclaim the wards they were recalled from.

“As a party we made a decision that we should retain our recalled councillors, subject to confirmation by the community. It’s an unfortunate mistake which we made in 2018 when we were electing our candidates for the National Assembly and local authority posts. Clearly, we had a problem with gender balance.”

Shiriyedenga stated that her party was in the process of correcting that anomaly through providing training to women interested in contesting for various posts in the 2023 general elections.

“We have come up with a smart gender taskforce and one of our main goals is to mentor potential female candidates with leadership development training so that they are able to stand on their own feet and participate in the upcoming 2023 general elections,’’ she said.

Tafadzwa Mugwadi, Zanu PF party’s director for information, said it was unfortunate that the country has not reached a point where male and female candidates are treated equally.

“We have not arrived at where we would be all comfortable to say we have reached at a stage where male and female are treated equally by the electorate, especially in procedural primary election processes.”

He added that the ruling Zanu PF currently has no mechanisms to alter primary election mechanisms in favour of women.

“At the moment there are no mechanisms to suspend or as it were scuttle primary elections in favour of any candidate, so male and female candidates race in the primary elections to chose those who will represent the party at equal level. We know that those are matters that need to be looked at seriously, the party believes in the capacity of women and we would want more women to participate in these processes,’’ Mugwadi said.

One of the four female candidates who will be contesting under Zanu PF, Ellen Mutuma, expressed joy at having managed to win her party’s primary elections, a move which earned her an opportunity to take part in the by-elections for ward 34 in Harare’s Mufakose constituency.

“I’m more than elated to have managed to win the primary elections. It’s more than important to have women in political positions because there are issues that affect women that only us can stand and advocate for,’’ she said.

LEAD party’s only candidate in the local by-elections, Nobetter Shongedza, said she was inspired to take the initiative to contest after her husband and children motivated her to go for it.

“My husband and kids motivated me to take part and they have been very supportive. I hope to bring change as far as service delivery is concerned in my ward and be an example of an exceptional leader,” Shongedza said.

Recalled ward 41 Harare West constituency councillor Kudzai Kadzombe, one of the two female candidates contesting in the by-elections from the CCC party, said her track record in service delivery speaks for itself.

“The citizens in my area already know my track record and the reduction of service delivery when I was recalled. Residents actually ended up doing protests at the Marlborough district offices when refuse was not being collected, which never happened when I was in office,’’ Kadzombe said.