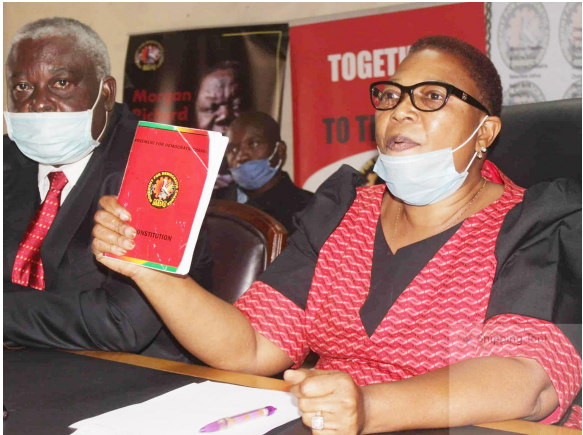 OPPOSITION MDC factional leaders Douglas Mwonzora and Thokozani Khupe are embroiled in a vicious fight over ZW$150 million (US$1.3 million at official rate and US$750 000 at parallel rate) availed by government under the Political Parties (Finance) Act ahead of the 26 March by-elections and amid preparations for the 2023 polls.

Khupe has claimed leadership of the MDC-T party and last week announced that Mwonzora had effectively fired himself from the movement by writing to the Zimbabwe Electoral Commission (Zec), stating his party will participate in the by-elections under the MDC-Alliance banner.

Khupe interpreted it to mean Mwonzora had fired himself from the MDC-T, adding that her party should therefore get the taxpayer funding.

Mwonzora, however, maintains he is the MDC-T leader although his party will go into alliance with other parties in the polls, hence it will contest as the MDC-Alliance.

The Mwonzora faction of the MDC-T had announced Khupe’s suspension from the party before Khupe last week announced the dismissal of her rival.

Khupe’s spokesperson Ntando Ndlovu said they have since written to Justice minister Ziyambi Ziyambi stating reasons why the MDC-T should get all the money as Mwonzora has formed a new political outfit.

“The president made it clear last week that there is a split in the MDC-T and she asked the ministry of Justice to treat both factions as equals so what it means is that money should be shared equally between the two MDC-T formations just like what happened in 2014 when we had a split in the MDC and the money was shared on a 50-50 basis between the (late former party leader Morgan) Tsvangirai group and the Tendai Biti-led group, so that is our attitude at this stage, but we have maintaned that Mwonzora has fired himself from the MDC-T by writing that letter to Zec to the effect that he is now MDC-Alliance, so he has formed a new party so he doesn’t qualify.”

He said the government has not indicated that it will hand over the money to Mwonzora “but we have implored them to do the right thing”.

Through the Government Gazette, the authorities announced: “lt is hereby notified, in terms of section 3(2) of the political Parties (Finance) Act [Chapter 2:1], that the total amount of  moneys payable to political parties in respect of  the year beginning 1st January, 2022 ending 31st December 2022, is five hundred million Zimbabwean  dollars.”

Endless squabbling within the opposition movement have seen the Nelson Chamisa-led formation transforming into the Citizens’ Coalition For Change (CCC).

Chamisa lost the party finances, headquarters, properties and members of Parliament to Mwonzora who has also claimed the party name.

Government officials say the money is likely to be awarded to Mwonzora who has a cosy relationship with President Emmerson Mnangagwa whom he has helped to consolidate power through supporting constitutional changes which strengthen his hand.

Mwonzora has also assisted Mnangagwa to subvert the opposition and stifle Chamisa, who is viewed as a threat by Zanu PF leaders.

Mwonzora has forged an alliance with Mnangagwa, meeting the President at least twice at State House to plot electoral strategy, among other issues.

While Mwonzora or Khupe will likely be awarded the money, Chamisa’s party is banking on grassroots fundraising, including the crowd funding platform GoFundMe, to finance an election campaign described by Chamisa as a “curtain raiser” for the 2023 polls. — Staff Writer.