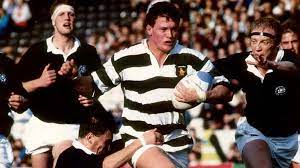 WHEN prop Adrian Garvey scored splendidly for Zimbabwe against Scotland at the 1991 Rugby World Cup, the first of a brace for himself and the team, it probably went down as one of the best tries in the history of the Sables.

Garvey’s try came from some superb lead-up work from his fellow tight forwards – who included a marvellously-gifted giant named Honeywell Nguruve – playing lock that afternoon in front of 35 000 Scots at Murrayfield in Edinburgh.

To be a member of Zimbabwe’s 25-man squad in that second World Cup edition – one of only four players of colour in the Sables’ squad – was testament to the quality possessed by Nguruve and the esteem in which he was held during the early era of racial transformation in Zimbabwean rugby.

Two black players started for Zimbabwe that day as the Scottish ran riot to win 51-12. Nguruve and the great Richard Tsimba made the starting line-up for the Sables, with the other two players of colour, Elimon “Bedford” Chimbima and Ian Noble, among the substitutes.

Zimbabwe lost all three Pool B matches by 50-plus scores against Scotland, Ireland and Japan. Against the Japanese, Nguruve crossed the whitewash once, his first and only try in his one and only World Cup tournament appearance.

The early ’90s were good for Nguruve. Despite rugby still being stuck in the amateur era those days, Australian scouts had been tracking Nguruve’s progress with great admiration and, in 1993, Perth-Bayswater Club signed the versatile Zimbabwean forward to boost their squad.

A good player cannot be ignored for a long time, no matter where he comes from. In the same year that he arrived in Australia, Nguruve was selected into a Western Australia side that played a warm-up match against Bulawayo-born coach Ian McIntosh’s touring Springboks of 1993, who lost the Test series 2-1 to the Wallabies.

Western Australia lost heavily at the eminent WACA Ground in Perth, 71-8, to a Bok side captained by the great Francois Pienaar, who two years later famously led South Africa on home soil to its historic first World Cup title.

For Nguruve though, being selected to play for one of the best provincial sides of a top-rugby playing nation, even as he was a World Cup player two years earlier, was an achievement worth noting for a 24-year-old from Africa who only picked up a rugby ball for the first time in high school.

A match preview for that Boks warm-up, in a local Perth newspaper, hyped up Nguruve, who had proved an instant hit on Australia’s club scene.

“Zimbabwean World Cup squad member whose highly mobile talents have brought depth to the WA squad in the loose and back of the lineout,” went part of the article.

That was then. Nguruve’s arrival in Australia 29 years ago was the last time he left Zimbabwe. He has not been back home since.

Over the past few years – former teammates, old friends and family have grown increasingly worried about Nguruve – chiefly due to rather weird social media posts in which the ex-Sables star has revealed serious mental disintegration during his time in the diaspora.

A few days ago, Nguruve seemed to have figured out his troubles, and mended his ways.

“Thank you everyone,” wrote Nguruve on Facebook. “I’m okay now. Lost my bearings for a while. I still have to tell you why I haven’t been to Zimbabwe for 29 years. (If) I tell you what happened sounds and feel like a fiction movie. Thank you.”

But no sooner had he posted this than he was back hurling slurs at anyone and everyone.

Before, not many had escaped Nguruve’s vitriol. This included his own father, Wiridzayi Nguruve, Zimbabwe’s first black police commissioner in 1982, who was labelled a “dic***ad” by his own son on Facebook for supposedly abusing his mother many years ago.

Prior, amongst his public utterances was a highly-charged tribal post in which he accused the country’s majority ethnic community of “killing” Zimbabwean rugby.

Today, Nguruve is 52, still extremely proud of his modest upbringing, and early education at Chinyika Primary School in rural Masvingo.

The very sporty Milton Boys High School in Bulawayo was probably the place where he was toughened up into a real warrior, using his natural huge physique to intimidate the opposition.

He wrote recently on Facebook: “I was taught to go in there and bash them to submission and hope I come out alive. In rugby, nice guys come last! I’m going in there to break bones. No funny business!”

Many old friends and teammates of Nguruve have spoken to this publication about how the ex-Sables World Cup star needs support in his hour of need.

“He has been crying out for help for a very long time and some of us former black teammates of his have tried, to do that, but blocked of access,” said an ex-Sables player.

In-between the vile posts, Nguruve has shown some tender sides, especially towards those who shaped his rugby career in the formative days.

“Mr Dawson told me, if you got to tackle, ‘stop that bugger and cut him in half’. The instruction from Mr Dawson was ‘I don’t want you to pass the ball, go as far as you can go, let them stop you.’ That was how I played the game,” wrote Nguruve.

So he is not short of familiar people to help him out of his woes.

Winning is all these Sables newcomers know