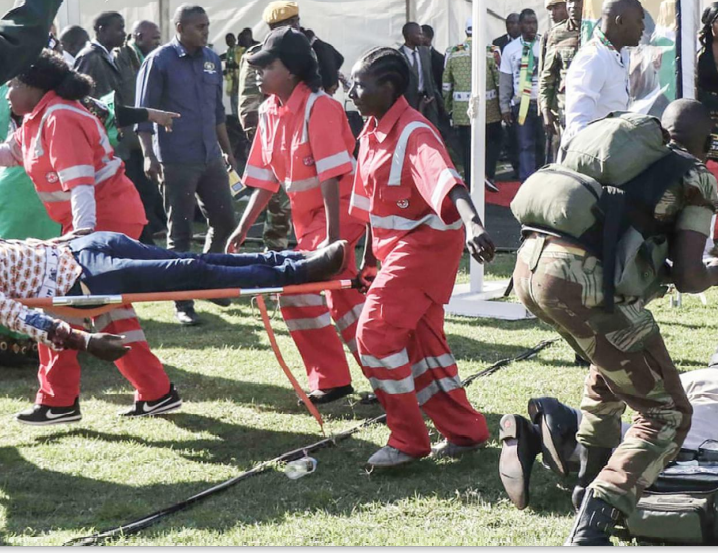 PRESIDENT Emmerson Mnangagwa was given a file of the investigations into the June 2018 White City Stadium deadly explosion after it became apparent that it was an inside job.

While police say the probe is still underway, security sources say the case had been concluded, although a suspect, who is believed to be outside the country, has not been arrested.

The investigations were characterised by lack of cohesion and trust among the different units of the multi-agency investigative team appointed to probe the case. The police and military clashed over how the investigation should be conducted, resulting in the two security agencies competing and sabotaging each other.

National police spokesperson assistant commissioner Paul Nyathi said investigations can only be completed once a suspect has been taken to court.

“The reward offer is still standing and anyone with information is free to engage the police. Investigations in any case reported to the police will conclude once a suspect is taken to court for consideration. This is the official position with all cases handled by the Zimbabwe Republic Police,” Nyathi said.

The bombing incident occurred on 23 June 2018 during the run-up to general elections at a campaign rally at White City Stadium in Bulawayo. An explosive device was detonated near the VIP area soon after Mnangagwa left the stage following his address at the stadium.

The blast claimed the lives of Colour Sergeant Stanley Mugunzva of the Presidential Guard unit in Dzivaresekwa, Harare, who was assigned to Vice-President Constantino Chiwenga and Nelson Dube, a security aide to former Vice-President Kembo Mohadi.

Two suspects, John Zulu and Douglas Musekiwa, were arrested then released without charge. In addition, the Zimbabwe National Army (ZNA) arrested and jailed Tendai Savanhu for boasting about the explosion on WhatsApp.

There was allegedly another suspect, according to witnesses, who was apprehended by the army at the venue and has not been seen ever since.

In July, four Russian specialists jetted into Zimbabwe to assist the multi-agency security team investigating the explosion which the government said was aimed at assassinating President Mnangagwa.

Related Topics:BulawayoWhite City Explosion
Up Next