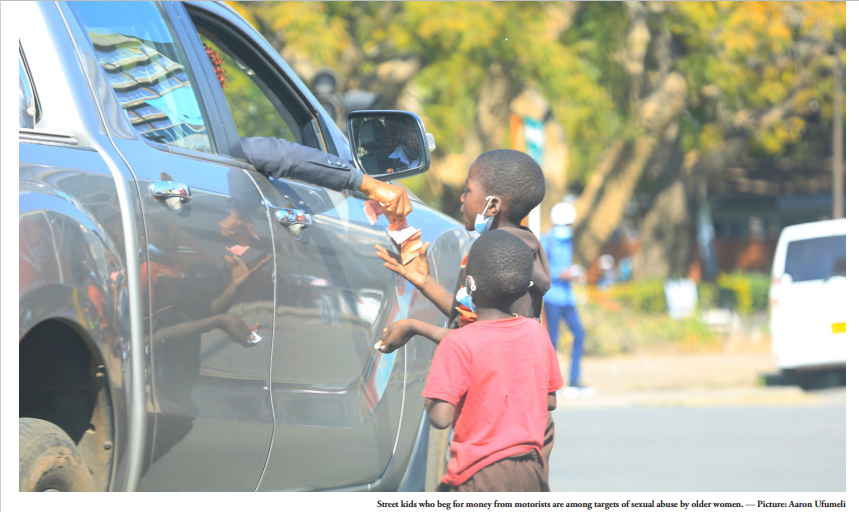 HE is only (16) years old, yet Tendai Chamunorwa (not his real name) has already mastered the art of stone craft, though not by choice.

As an orphan, Chamunorwa, who looks after his two young siblings, spends his entire day hammering stones for sale to make ends meet in Chitungwiza, 25 kilometres south of Harare. The high unemployment rate in the country and poverty force some boys to venture into income-generating activities which sometimes leave them vulnerable to exploitation and abuse.

‘‘I stay with my two young brothers, one is seven and the other one is 10. Our parents died due to Covid-19 last year, so l am the one who is taking care of my siblings. As a big brother, I have to work hard to feed my siblings and also to pay rentals,” he says.

“This job is very tough for me to get enough money to pay rent and buy food, but I have no option except to work hard for my siblings. Due to my situation, some big mamas (older women) take advantage of my situation and force me to have sex with them in return for money or food. At first, l was not comfortable sleeping with them, but l end up engaging in sex with them out of desperation.”

Among those who seek sexual gratification in return for assistance are single mothers and married women, including those with husbands in the diaspora.

“With the life that l am living now if a woman offers me money, l can’t refuse. At first, a single mother from my neighborhood established a good relationship by calling me son, she presented herself to the community as a good-hearted woman who is helping me unconditionally, but she helps me in exchange for sexual favours,” he said.

Some of the women, he revealed, demand unprotected sex, despite the risk of contracting HIV.

“Sometimes women verbally provoke us by simply saying that we are not man enough because we cannot do anything to them. It is difficult to refuse when that older woman approaches you since that is the same person who is helping you. Sometimes I spend some months without getting customers, so I end up being abused by an older woman,” Chamunorwa says.

Chamunorwa is not alone in this predicament.

At a tender age, Tadiwa Mugwagwa (15) is now a breadwinner for the family including his diabetic grandmother.

‘‘I come into town daily to wash cars in the streets so that I get money to buy food for my grandmother as I am the breadwinner. My grandmother is old and can’t work for herself. When things get so tough for me and then someone comes with money, I quickly accept it through being sexually abused. I know if I agree to be abused I’m better off than before. It’s not my choice, but my situation forces me,’’ Mugwawa told The NewsHawks.

Mugwagwa is being abused by the older women who pick him up in the streets and take him to lodges where they have sex with him.

“My first day when I was abused, I met this other woman in town at 7pm and she picked me. On this day I had spent the whole day begging, but no one helped me. She asked me to thoroughly bath before sleeping with me. I used to refuse such offers whenever they asked me to go with them, but my situation forces me to do these things,” Mugwagwa said.

Young Bothwell Muzondo (12) spends much of his time begging people in the streets, which is the only way for him and his blind grandfather to eat.

‘‘I have no choice rather than to beg in the streets for us to get food. I face a lot of challenges whilst am looking for help from people. Instead of helping me, some people insult me in front of people. Also, some older women approach me for sex so that I get help. At my age, I can’t do such things as l am still young. That’s the main challenge I’m facing.”

‘‘Masculinities and social norms prevalent in the three targeted communities have led to non-reporting of sexual abuses, as abused boys fear being feminised and ostracised. Poverty identified by key informants, caregivers, community members, and the boys themselves as one of the key factors making boys vulnerable to sexual violence,” the report reads.

“Children in difficult circumstances are often lured into sexual relationships with both older men and women for money, clothes, food and shelter. Poverty has also led some families to live in crowded accommodation spaces where children and adults sleep in the same room. These living arrangements make children, both girls and boys, vulnerable to sexual abuse.’’

Due to fear of society’s reaction, most victims of sexual abuse choose to remain silent after the assault. Service providers confirmed that they are receiving few cases of sexual abuse concerning boys compared to girls. The report says this is partly because fewer boys report sexual abuse while there is also little support for abused boys.

‘‘The ministry of Health, ministry of Women’s Affairs, police, courts all confirmed that they are receiving fewer cases of sexual violence concerning boys compared to girls and they were concerned that this could be a reflection of under-reporting of cases of sexual abuse against boys.

In Bindura, for example, the courts handle an average of 10 cases per year against more than 100 cases of sexual abuse against girls.

In Mutare, the courts handle on average four cases per year of sexual abuse against boys while those against girls are over a hundred. These findings are consistent with literature which showed that very few boys who are victims of sexual violence report their assaults because they think that they will experience negative treatment’’.

Related Topics:PovertySexual violence
Up Next