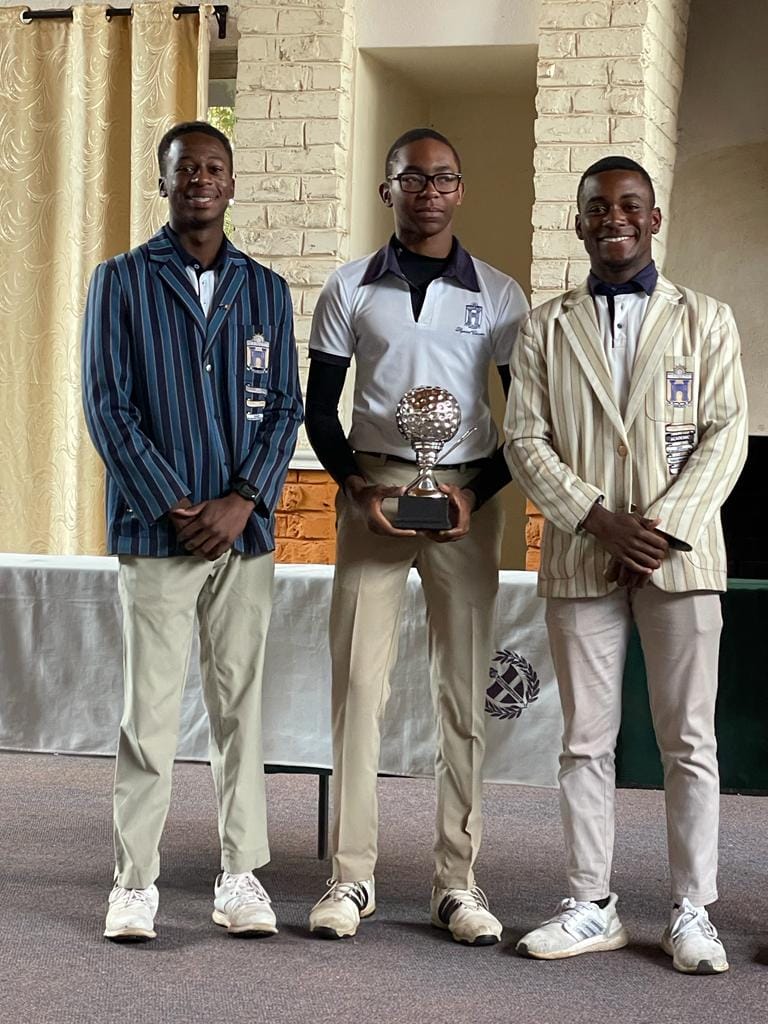 Nkosilathi Dube (in lighter-coloured blazer) with some of his Heritage School golf teammates.

WHEN adorable little Christine passed away tragically after choking on a lychee seed in 2015, aged just four, her family was devastated and heartbroken.

The infant’s death in the freak accident at home in Harare was a hammer blow for dad Crispen Mhike, a man with an in-born passion for serving the community as well as grooming children and young people.

It was only natural that he would carve a career out of education and sport.

44-year-old Mhike was a very young teacher, 22 then, when he left Harare at the turn of the millennium to teach geography at Hillcrest College, a prestigious private school established in Zimbabwe’s third-largest city of Mutare just 15 years earlier.

Yup, a teacher at heart, but the main attraction – by Mhike’s own admission – was the opportunity to coach sports at a place that had quickly established itself as a force to reckon with in Zimbabwe, challenging the status quo and frequently defeating some of the country’s oldest top schools.

Back home in Harare, Mhike had been an all-rounder of sorts as a schoolboy growing up in the ’80s to early ’90s – a bits-and-pieces rugby player, cricketer, footballer and champion swimmer at David Livingstone Primary School and later Churchill Boys High.

So in 2000 upon arrival at Hillcrest, Mhike was put in charge of the Under-14 rugby team. Within two years, at the age of 24, he was appointed first-team rugby coach, a position he would hold on to for the next 17 years until his departure in 2019 in the position of the school’s deputy headmaster.

As Hillcrest’s deputy headmaster and first-team rugby coach, Mhike also doubled as sports director, which meant more involvement with a diversified range of codes at the school.

Raised in Harare’s middle-class neighbourhood of Hatfield, Mhike always yearned to be a role model to those younger than him, and it was at Hillcrest – with his broadened role – where his calling came to the fore.

In his last three years at Hillcrest, the school offered a scholarship to Tavonga Ablant, a bright rugby talent from Mbare, the well-known Harare township. But Ablant’s bursary did not include on-campus boarding, so Mhike took the disadvantaged but outrageously skilful youngster into his home and raised him as his own son. Ablant later won another scholarship to Maritzburg College in South Africa and is soon on his way to the United States on a varsity bursary.

The terribly tragic death of his young daughter seven years ago was a soul-crushing experience for Mhike, which only fueled his strong desire to make a real difference in the lives of others.

“Whenever I see children, I always say to myself I have over 350 of them (at the school), you know, and they are so important and dear to me. Losing my daughter tragically through choking made me realise that our time on earth can end anytime, so we need to make an impact whilst we can. I really want to make an impact, I really want to change lives, inspire and make young people humble, because that’s the cornerstone.”

The word “humility” dominates discussion with Mhike, and it is no coincidence that his outgoing head-boy, Nkosilathi Dube, this week left the nation spellbound with a powerful speech that oozed passion and humility.

The delightfully eloquent teenager – who was endorsed by Mhike at the end of last year to be Heritage’s 2022 headboy –delivered an emotional and heart-filled speech at a recent event, telling the awestruck audience how his once privileged family once hit rock bottom that they were forced to retreat to Epworth, a poverty-stricken settlement just outside Harare notorious for drug abuse, rampant prostitution and other vices.

In Epworth, he had to sleep on the couch in a tiny house, and used public transport to reach Heritage, a well-off private school located in the affluent Borrowdale Brooke suburb.

Dube – a gifted rugby player and golfer who first arrived at Heritage on a sports scholarship in 2017 – revealed how an aunt and cousin came through with financial assistance to make his student life easier.

His unforeseen unfortunate circumstances, Dube said in his speech, made him stronger as a young person, and he pleaded with parents not to “spoil” their children as way of showing love.

It was a rare show of honesty and modesty by a teenager growing up in times where peer pressure and material desires can so easily take control of adolescents.

“My relationship with Nkosi is very strong,” headmaster Mhike remarked. “What made me appoint him headboy was that I’m a greater believer in humility. So young people who are humble, who accept who they are and what they have, and at the same time take criticism and understand that they are not perfect, and they can be moulded and are teachable – that’s the kind of leaders I would like to see. Leaders that never become too big to do the small things. That’s the qualities that Nkosi has. I mean, I meet him every Thursday, I have tea with the school heads – headboy, headgirl, deputy headgirl, deputy headboy, and sports prefects. We go through a lot of nurturing, go through a lot of leadership skills and training because I believe that they can instill that kind of culture in others. So when we meet we discuss these things because they are closer to the other students and have great influence on them. Most of the things he (Dube) said in that speech resonate well with what I stand for, and what we stand for as a school.”

Oldest son of the late former Zimbabwean police deputy commissioner Philip Mhike – who served with distinction until retirement in 1999 and death in 2015 – it is no surprise that the good values of discipline and humility are rooted in the family of this dedicated educator and keen sportsman.

Growing up initially in a police residence, Morris Depot, Mhike and his siblings were exposed to a variety of sporting codes and good facilities, a legacy of the predominantly white national police service of times gone by.

As a boy in the ’80s, he supported Black Mambas, the police’s foremost football club, never missing the team’s home matches at Morris Depot.

“I grew up at different times with George Mbwando, Masimba Dinyero and Nqobizitha Ncube in Morris Depot. George and Nqo’s dads were also policemen. Like myself, George, who was older than me, went to Churchill and was also a very good swimmer.”

Mbwando and Ncube went on to play international football for Zimbabwe whilst policeman-cum-footballer Dinyero has legendary status at Dynamos, the country’s most successful club.

“When Mambas folded, I then started supporting Dynamos,” chuckled Mhike.

This, I can testify, from living in Hatfield for a couple of years, mingling with the Mhikes and others during spare time in the days Zimbabwe’s record-breaking hyperinflation was taking heavy toll on the nation’s psyche.

The watering hole for the group was across the main road where countless hours were spent over rounds of cold ones, with sport dominating conversations.

The three Mhike brothers all supported Dynamos, who in 2007 had won their first title in a decade, following up with a good run in the subsequent year’s African Champions League, where they went all the way to semi-finals under David Mandigora.

Hardly did the crew miss a Dynamos home tie at Rufaro Stadium, the Mhikes boys leading the roadshow on the family’s double-cab pick-ups: Oldest Cris then Joe – who played Under-14 rugby at Churchill with none other than Tendai “Beast” Mtawarira years back – and Allan, a one-time sports reporter.

Others would be Walter Njowa, one of Zimbabwe’s top rugby referees and a DeMbare diehard fan. Then an ice-cream vendor in the neighbourhood, who they called Bosso, or Wasu. “Bosso” because of his undying love for Highlanders, in spite of his Mutare roots. He used to explain that when he was 12 or 13, his father relocated with the family to Bulawayo, where Highlanders made a lasting impression in him.

Not forgetting Modreck Makotose, the only non-football fan among the friends, who would join just for the fun.

Modreck, who worked in the Zimbabwe Rugby Union offices, died suddenly in his mid-30s in 2011, a wonderful friend and confidant of us all.

He learnt his sport at Murray McDougal Primary School in the Lowveld, where he was raised, and in boarding school at Plumtree High.

But Modreck liked to lead a humble life, despite a background of relative privilege. His sudden demise in what was supposed to be the prime of his life, together with his happy but modest lifestyle, also provides inspiration to Mhike in his work with the young ones.

“Modreck was a good friend of ours and a likeable character,” said Mhike. “I miss him so much. He also exhibited traits of simplicity and humility, as you remember well.”

Thankfully there is still hope though for servant leadership in Zimbabwe, with even younger people like Nkosi Dube showing us the ability to carry the torch.

Praise from Sir Andy, but ex-Zim stars must also find their voices