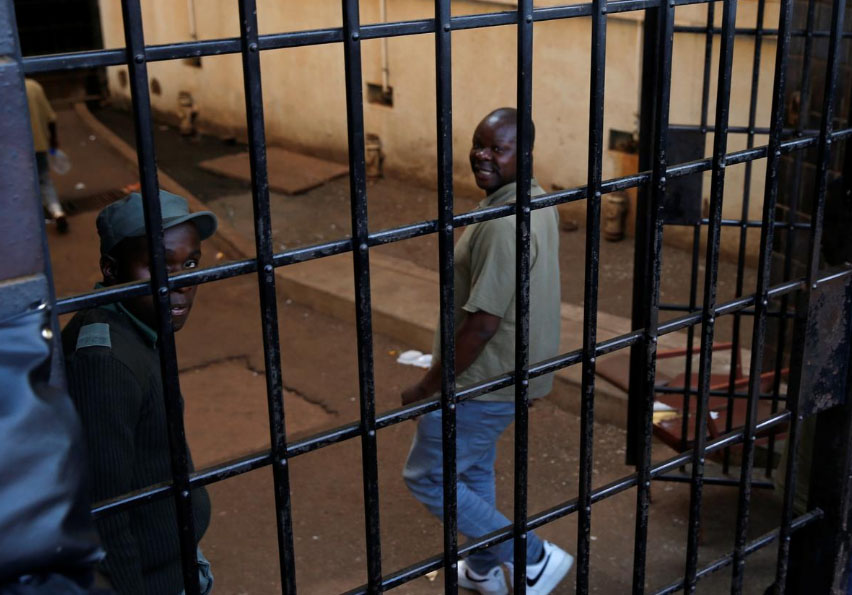 THE arrest of Citizens’ Coalition for Change parliamentarians Costa Machingauta and Amos Chibaya (pictured in khaki shirt) alongside other party members, including the elderly and juveniles, for holding a meeting in Budiriro, is a tale tell sign that lawfare will be a key instrument in this year’s general elections.

Coming hot on the heels of the savage beating of elderly members of the opposition party in Murehwa, which also showed that violence will remain a feature of Zimbabwean polls, the latest action shows Zanu PF is far from repenting.

The savage beatings were captured in a video that went viral on social media, attracting widespread condemnation globally.

In the video, Zanu PF youth militia, are seen questioning the elderly villagers why they were gathered to support CCC despite their old age before severely flogging them.

The violence has been on  the increase since the beginning of campaigns for  the parliamentary and local council by-elections which were held last year.

In the run-up to the by-elections the violence claimed the life of 35-year-old  Mboneni Ncube who was killed by a spear at a CCC campaign rally in Kwekwe.

CCC leader Nelson Chamisa bore the brunt of the escalating violence during  his  whirlwind countrywide tour last year to drum up support for  his party which was formed early last year. Chamisa and his entourage  encountered numerous roadblocks and were also physically attacked on several occasions.

Senior Zanu PF and government officials have added fuel to  the  fire with inflammatory remarks at campaign rallies.  At one  Zanu PF rally prior to last year’s by-elections, Vice-President Constatino Chiwenga said they would  crush the CCC opposition party like lice. The remarks sparked national outrage and, although Chiwenga has since called for peace, he has not bothered to retract the inflammatory remarks.

Lawfare is the misuse of legal systems and principles against an opponents for the purpose of damaging or deligitimising them.

Police last week fired teargas at a CCC gathering in Budiriro, Harare, last week and arrested 26 party members, including Machingauta and Chibaya. They were arrested for holding a meeting which was not sanctioned by the police although the party said it was a private internal meeting which did not need police clearance.

Lawfare was used by Mnangagwa to decimate Chamisa and his MDC Alliance party in 2020.

A High Court ruling that year recognised Thokozani Khupe as the legitimate successor of the late founding MDC leader Morgan Tsvangirai and interim leader of the party.

This was after the ruling the previous  year determined that MDC Alliance leader Nelson Chamisa’s rise to the party’s presidency was irregular. Khupe lost the leadership to Mwonzora during an extraordinary congress held in Harare.

The rulings resulted in more than 40 members of Parliament and 80 local councillors  of the MDC Alliance being kicked out at the behest of Douglas Mwonzora, who also took over the party’s headquarters in Harare. This led Chamisa to break away and form CCC.

In another brazen use of lawfare, Chiwenga, who is also Health minister, in late 2020 banned the holding of by-elections to fill vacancies in Parliament and local authorities for as long as Covid-19 remains a formidable epidemic.

This was after the Zimbabwe Electoral Commission had announced that by-elections would be held in December that year.

“These regulations may be cited as the Public Health (Covid-19 Prevention, Containment and Treatment (Amendment) Regulations pursuant to sub-section (2), the holding of any by-election to fill a casual vacancy in Parliament or in local authority is for the duration of the period of the declaration of Covid-19 as a formidable epidemic disease, suspended, and if such vacancy occurred while such declaration is in force, no part of the period from the date of such vacancy to the date of the end of declaration she be counted for the purpose of section (158 (3) of the Constitution,” Statutory Instrument 225A of 2020 reads.

As part of measures  to further stifle the opposition, the government introduced sections of the Patriotic Bill into the amended Criminal Law Codification and Reform Amendment Bill.

The Private Voluntary Organisations (PVOs) Amendment Bill, which has been roundly condemned by opposition parties and civic groups as meant to stifle operations of non-governmental organisations (NGOs), has sailed through the National Assembly and is seen as another case of lawfare  being used to stifle dissent.

Lawfare by government has targeted civil society and opposition parties as well as health workers.

As part of the amendments to the Health Act ,which was recently signed by  Mnangagwa, health workers can only strike for three days and prolonged strikes will be punished with a jail term of six months.

Political analyst Eldred Masunungure believes that repression through violence and lawfare has become part of the Zanu PF government’s DNA.

“I do not think it’s necessarily elections. It is how the system works,” Masunungure said. “It is now on impulse to close down the democratic space whether under (former president Robert) Mugabe or under the so-called  Second Republic.”

He said violence and lawfare will escalate in the run-up to the announcement of elections but will de-escalate towards the elections as the government tries to give the impression to election observers that the running of elections will be free and fair.

Penhalonga demands probe into deaths of miners at Redwing Mine