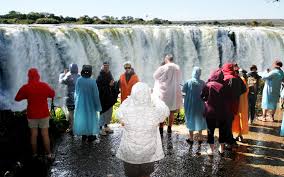 THE Victoria Falls rainforest was visited by over 15 000 tourists between May and June with most tourists arriving after the successful mass vaccination rollout campaign in the resort city.

According to Zimbabwe Tourism Authority (ZTA) figures, the rainforest recorded 15 411 domestic and foreign tourists, 11 469 of which were local tourists.

ZTA head of corporate affairs Godfrey Koti said the visits can be attributed partly to the mass vaccination campaign programme, which saw over 20 000 Victoria Falls residents getting vaccinated against Covid-19.

“We have seen just a little bit of movement from inflows of tourists as obviously there are still restrictions in the global community, so we are not going to get as many people as we would want to but the a few that have come and acted as ambassadors going out there to speak positively about how Victoria Falls has taken care of them,” Koti said.

“The numbers may be insignificant but they are definitely going up slowly and we are hoping that as we put lockdown restrictions aside, we will be seeing more people coming into the country globally.”

The vaccination programme, according to Koti, has attracted even high-profile visitors into the country. He said high-profile government delegates, including the Kenyan Foreign Affairs principal secretary Macharia Kamau, visited the country after the exercise.

“The vaccination programme has attracted attention to travellers across the world where recently we had 10 billionaires that came into the country, the Kenyan Foreign Affairs minister,” Koti said.

“These are people of high level and high regard and they found the country to be very safe. We are hoping that they would also go back to their countries and speak positively about Victoria Falls and the way they were treated during this pandemic.

“With the vaccination on its own, we have seen Zimbabwe being removed from the red list, in particular Ireland right next door to the United Kingdom and that, we hope, will encourage them to also act.”

Koti said it also pleasing that the World Health Organisation (WHO) has commended Zimbabwe for how it is managing the Covid-19 pandemic hence the increase in the number of tourists from countries that have put Zimbabwe on the green tag such as United States, which is the country’s highest source of tourists.

He revealed that domestic tourism in 2020 contributed about US$310 million to Treasury.

The ZTA had an ambitious target of US$1.5 billion but was hamstrung by the Covid-19 pandemic.

“I am hopeful that this year we are going to get a different story in terms of the contribution from tourism.” Koti said.

“What is interesting about that 2020 contribution is that about 80% came from the domestic tourists because not many people travelled outside the country so most of the people spent their money at home, and that’s an encouraging figure.”

Tourism employs about 120 000 people countrywide, but the authority has not released the total number of people who lost their jobs since the Covid-19 was first detected in the country in

Related Topics:covid-19victoria falls
Up Next