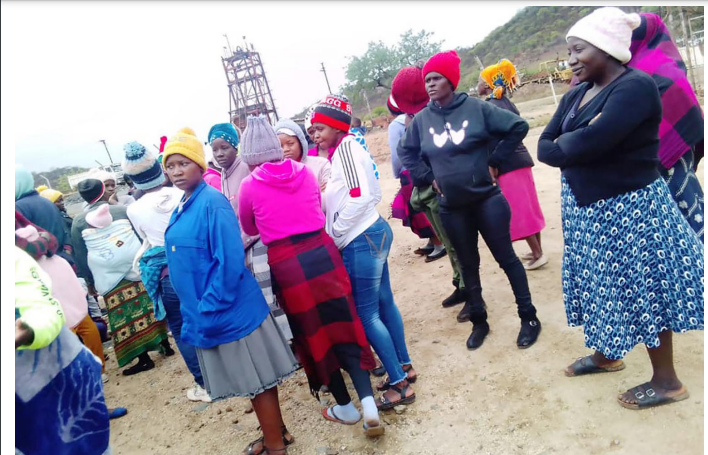 Wives of Vubachikwe Gold Mine workers stage a demonstration in Gwanda

THE Zimbabwe Diamond and Allied Mineral Workers’ Union (ZDAMWU) has resolved to drag to court one of Zimbabwe’s biggest gold mines, Vubachikwe, over deteriorating working conditions that have resulted in a series of crippling demonstrations at its Gwanda plant in the past two weeks.

A fortnight ago, wives of Vubachikwe Gold Mine workers staged a demonstration at the plant, protesting poor remuneration and working conditions at a time when company bosses are reportedly minting huge amounts of money.

Last week, 170 workers were arrested after again demonstrating at the plant, demanding to be paid US dollar components of their salaries for September and October as well as wages dating back to August.

The Zimbabwe Lawyers for Human Rights (ZLHR) represented the 170 workers and they were granted bail on a charge of public violence.

The workers were accused of failing to comply with the conditions which had been set for the sanctioned demonstration.

Justice Chinhema, the general secretary of the Diamond and Allied Mineral Workers’ Union (ZDAMWU), this week told The NewsHawks that his grouping is escalating the labour standoff at Vubachikwe Gold Mine to the High Court.

“That’s the only way forward (approaching the High Court). We are also looking at various options that can solve the plight of the workers in order to avoid such things happening in future,” he said, adding:

“Vubachikwe is one of the biggest mines in Zimbabwe, which should be contributing to the attainment of the US$12 billion mining industry. Maybe it requires capital injection. Maybe it’s poor management. All these are worth scrutiny. That’s what we are now looking at.”

Duration Gold Limited, which operates as a subsidiary of Clarity Enterprises Limited, owns Vubachikwe, one of Zimbabwe’s oldest gold mines employing over 1 000 workers.

The company also owns Gaika and Queens mines in Nyathi, Matabeleland North province where, again, workers are not happy.

In total, Duration Gold Limited owns five core assets with historic production of 4.6 million ounces (oz), according to the 2022 statistics of large mining firms posted on the website of the Zimbabwe Consolidated Diamond Company (ZCDC).

1oz of gold is a bar made from investment-grade gold bullion and each one weighs exactly 1 troy ounce, or 31.1034768 grammes. Each bar has fineness, purity or gold content of at least 99.9% and costs between US$1 369 and US$1, 727, depending on markets in different parts of the World.

Duration Gold Limited, founded in 2006 and based in Bulawayo, is therefore a multi-million dollar business generating 4.6 million oz as recorded by ZMDC.

Video evidence obtained by The NewsHawks of the demonstration of the wives at the mine depicted a sad situation. With babies strapped on their backs, one of them shouted: “They are saying US$5 million went to Zanu PF for the party congress so there is no money, but it’s false. We want salaries of our husbands to be paid.”

Another woman is heard saying: “The company is now giving our husbands flour, beans and mealie-meal, saying that forms their salaries. It’s bad. In fact, that money for those things was always  deducted from the salaries since a long time ago when there was a food crisis in Gwanda. Now they are saying the food items are enough to be called salaries. We are angry.”

A white sack tied to the company premises fence carried a message written in black paint which read: “Kananji (mine manager) must go”.

Chinhema said the demonstration was justified.

“When month-end comes families expect to see the husband bringing food or enough salary that can make them survive. This is not happening,” he said.
Workers said they are not happy for being paid in the local RTGS currency, yet the gold they produce is sold in forex.

“They are giving us beans and mealie-meal instead of salaries, therefore leaving us with no money for other things like school fees, health services and so on.”
“We could have understood it if the reason for our predicament was plummeting production, but that is not it. We are still producing lots of gold that is sold to international buyers at good prices,” said one worker.

Another worker told The NewsHawks that the company bosses who are “obviously” minting money boasted that nothing could be done to them for the labour injustices because they are close to government bosses who will always protect them.

“There is general fear among workers. We don’t know what to do, that is why we secretly called a trade union from outside to help us instead of the workers’ committee at the mine which has been captured nevertheless,” said another worker.

Chinhema told The NewsHawks that Vubachikwe management was trying to divide the workers on trade union lines.

“The workers are divided on trade union differences, where some tired union is bribing the workers’ committee with T-shirts and caps. They give the committee wrong advice on how to deal with their grievances,” he said.

“We can’t have high production but workers live in poverty. Parties must engage each other holistically. So by failing to engage each other, these problems were developing”.
“We shall use engagement first. Our approach as ZDAMWU is engage, but we are radical on issues that affect our members, so we will litigate. People are working to earn a salary, but it’s not coming.”

“We can’t have a mine failing to pay. What’s the challenge? We need to get to the bottom of it. We are taking action as a union,” said the trade unionist.

WhatsApp messages sent by The NewsHawks to None Kananji, the Vubachikwe mine manager, ticked blue but he did not respond.

Kananji, who was promoted to that post in May this year from the post of underground manager, did not answer phone calls.

At Queens Mine, a sister company of Vubachikwe which is afflicted with similar problems, management, through a memorandum signed by the mine manager John Mlazi dated 4 November barred workers from speaking to journalists about a section of the plant called Little Mviga.

“It has come to the management’s attention that some employees are talking to newspapers about the working conditions at Little Mviga section, particularly the system being used to lift ore from the working level to the skip. The system was tested and it proved that it is safe and productive for now, while development of the shaft to the lower end of the mine is being done.

“In as much as this is criticised mainly by people who have got no clue on mining systems, DGI (Duration Gold Limited) is proud to have provided employment opportunities to the locals. As DGI we will continue being of help to the communities that we operate in by providing employment, and contributing towards the US$12 billion economy as prescribed by President Emmerson Mnangagwa.”

Mlazi said DGI employees must report any unsafe conditions to their heads of department or through safety representatives in their sections instead of speaking to journalists.