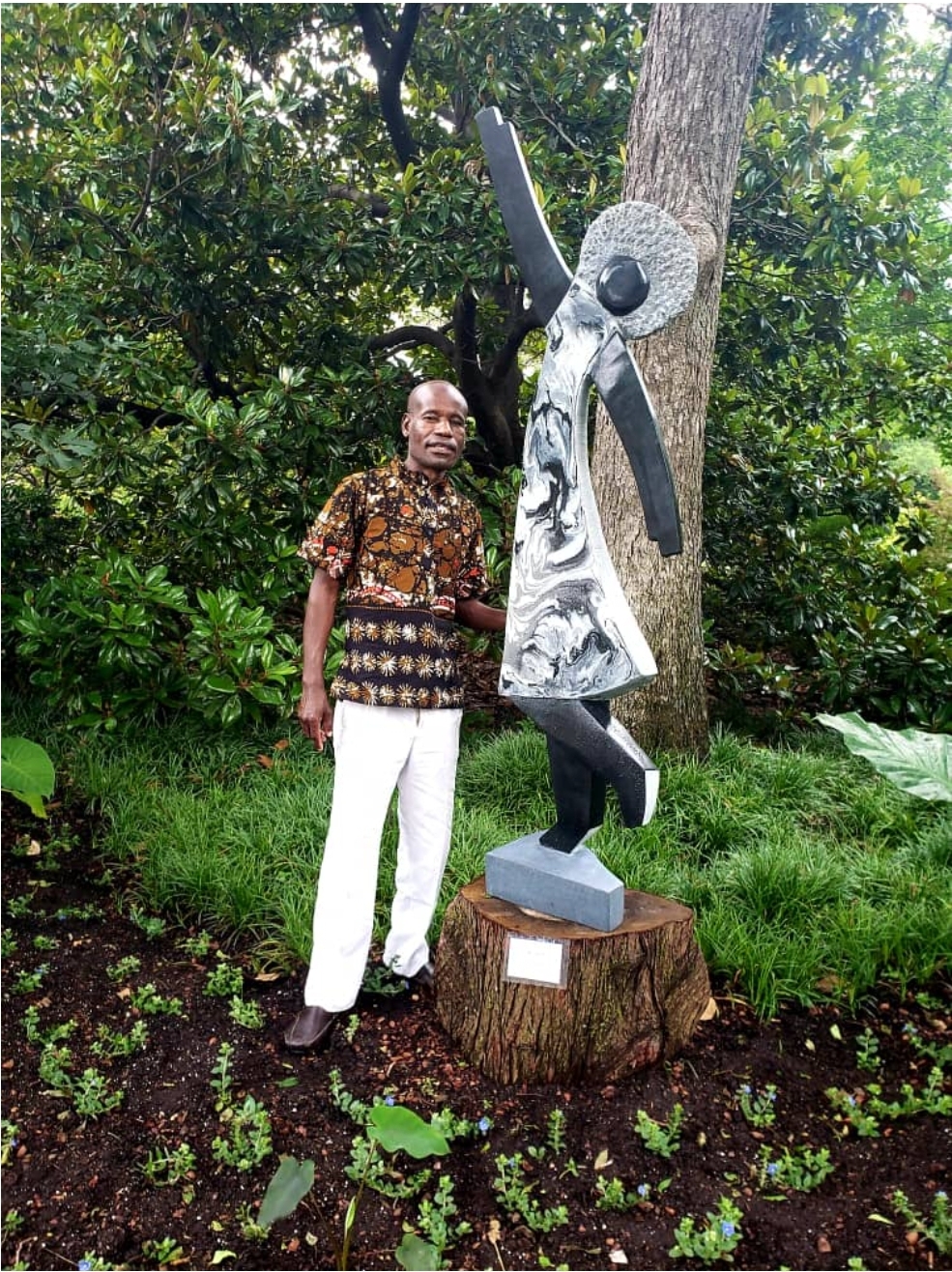 DOMINIC Benhura, one of Zimbabwe’s leading sculptors, recently made a welcome return to Texas in the United States for a month-long solo exhibition at Dallas Arboretum.
JONATHAN MBIRIYAMVEKA
The 52-year-old world-renowned artist is not new to the lush gardens of Dallas Arboretum as he has previously held solo exhibitions there although this year the show evokes a lot of fond memories and enthusiasm since the world went into Covid-19 lockdown.
The excitement is around his evolving techniques and designs since he last exhibited at the venue.
“There is a great deal of new colour techniques on my pieces within my solo show and also those of my colleagues in group exhibitions spread around the beautiful gardens,” Benhura said.
At least 20 sculptures are part of the exhibition, including one of his popular masterpieces, titled “The Dancer”. The piece showcases Benhura’s trademark motion art at its best, in which the stone appears to be in fluid motion, underpinned by breathtaking symmetry.
The textures and choice of sculptures bring out amazing dimensions to Benhura’s masterpieces. He mastered the art in his formative years at the age of 12 when he began carving stone.
Back then, he used clay as his choice of medium.
Now an exponent in stone, Benhura makes it look easy and his works occupy some of the most prestigious public spaces around the world.
The pieces are popular with gallerists, art collectors and museums across the world.
“As you might be aware, I have put in a lot of work, new techniques and colour and refinement of designs over time,” he said.
Like most sculptors, Benhura is planning on doing a post-Covid-19 show in which he reflects on the impact of the pandemic on people’s lived realities around the world.
“I intend to do a post-mortem or perspective pieces on how I felt and still feel about the impact of the Covid-19 pandemic. I did some during the Aids period when people were still ignorant of the pandemic,” he said.
The latest exhibition has been well received, with media houses such as Fox News running a special feature on Benhura’s artworks which are greatly inspired by women and children.
“Zimsculpt and the Dallas Aborterum did a good job in putting the interview together. I was interviewed and also I had an opportunity to address guests on our beautiful Zimbabwe and our rich art and culture heritage,” he said.
Benhura was honoured with a doctorate in culture and heritage by the Women’s University in Africa. He became the first stone sculptor to be conferred a PhD, joining the ranks of distinguished artists like Dr Thomas Mapfumo and Dr Oliver Mtukudzi.
“It is an encouragement to use our experience to nurture youngsters, especially girls who are very few in the industry. There is definitely a niche for girls and women. Since the world has become gender sensitive, people will support them globally.
“Artists do not retire so, God willing, I will be able to interact more with schools and universities in sharing my plus 40 years’ experience.
“I hope the government will take art subjects seriously, beginning at ECD (early childhood development) level, so that they grow with it. When we travel we are asked to work with kids, but here it is mostly private schools who bring their kids to interact with us,” he once said.
The self-taught sculptor has always had a soft spot for women and the girl child.
He is famous around the world for his signature motion masterpieces which grace some of the world’s heritage sites and international airports. Some of his artworks are on display at the Nelson Mandela Foundation offices in South Africa.
In 2016, he came in for criticism after he sculpted a statue of the then president Robert Mugabe, but he defended it, saying it was a unique piece of art.
“I think most people do not understand my art and they do not understand the difference in art styles. That sculpture was never meant to look exactly as the President’s image. I do not do exact figures. Some artists do exact figures, but I do something that makes my work different,” he said.
Since breaking out from his mentor Tapfuma Gutsa, Benhura has held several solo exhibitions showcasing a broad spectrum of his old and new masterpieces. His last solo show in 12 years was held in 2019 at Amanzi Restaurant in Harare where he reflected on his 40 years of working on stone.
For Benhura, stone carving has always been his hobby although along the way it became a career path. Benhura is also inspired by nature, plants and animals.
He is renowned for his creative imagination and his pieces do not always depict plain form.
Related Topics:
Up Next

Diva Tamy revels in the limelight

There is lot of misogyny on local hip-hop scene, says Awa Khiwe