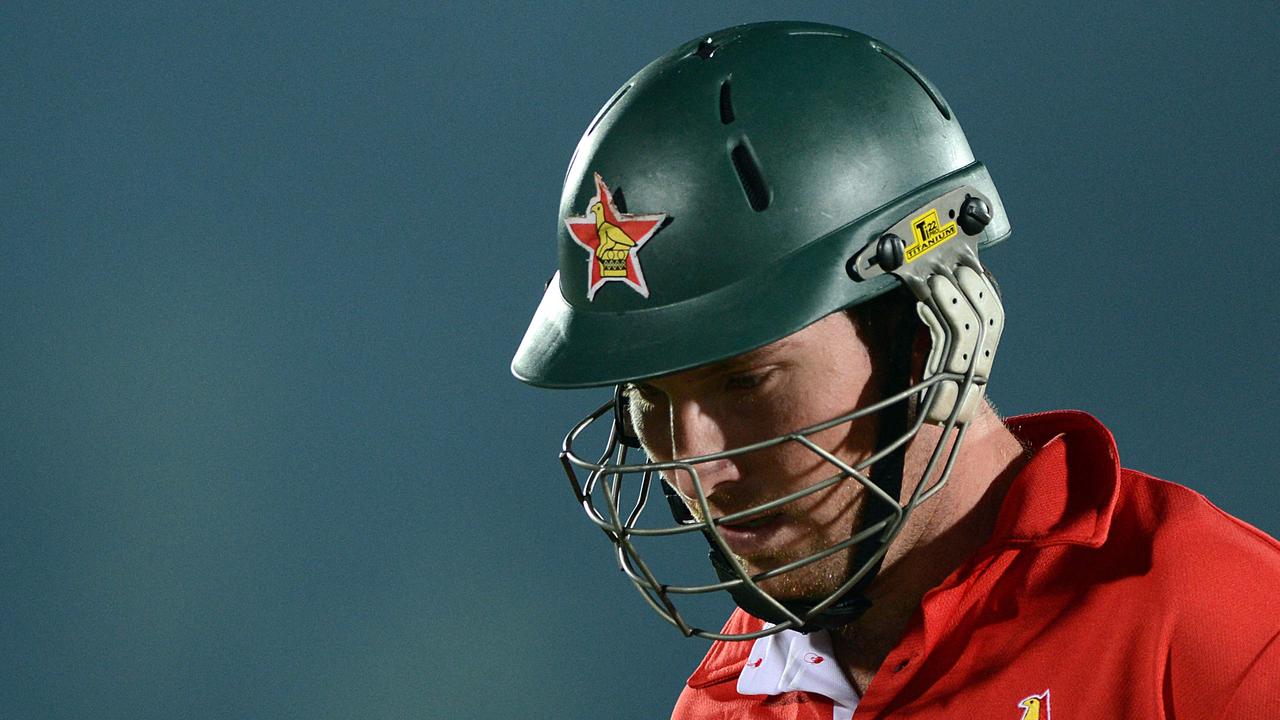 LITTLE voices in Brendan Taylor’s head whispered to him some four years ago that he had turned into an alcoholic, prone to the occasional abuse of drugs, and in need of professional help to overcome his addictions.

But the former Zimbabwe cricket captain ignored the nudges and the murmurs. He was in his early 30s, in the prime of his life and cricket career, so he thought he was normal, that his problems would in time take care of themselves.

After all, his performances on the field were not exactly a reflection of his off-field troubles. He was still playing well, though no longer at his majestic best by his standards of a few seasons back.

Nonetheless, he was Zimbabwe’s best player by a long shot, the African team’s only world-class cricketer for the better part of a decade, a genuine Zimbabwean sporting hero revered by multitudes of fellow countrymen from different social and racial backgrounds.

But Taylor’s problems did not go away. He only got into a deeper and darker abyss as his woes cut short his career, and almost destroyed his life, and legacy.

Matters came to a head in October 2019 on an all-expenses-paid private trip to India where Taylor’s rich guests reportedly offered him cocaine while secretly filming as he inhaled the stimulant drug, then later used the footage to blackmail him into match-fixing, with an advance payment of US$15 000, which the former Zimbabwe talismanic batsman said he accepted out of fear.

When the matter came to light and was put under investigation by the International Cricket Council (ICC), the game’s global governing body reached the verdict in January to ban Taylor for three-and-a-half years for breaching anti-corruption and anti-doping rules, despite not being found guilty of actually throwing any matches.

This week, Taylor spoke openly in an exclusive interview with The NewsHawks about his fight with addiction, his road to recovery as well as three months spent in rehabilitation in Nyanga, a scenic resort in Zimbabwe’s Eastern Highlands region.

“I had an extremely valuable life-changing experience for three months in the treatment facility in Nyanga,” Taylor told this publication in an in-depth interview.

“It was time to just press the reset button, to get my health back on track, get my mind back on track and iron out all the negative…the poisonous stuff I put in my body and, you know, really just try to alter the mind and find a strong faith in a higher power to combat all these terrible addictions. So it was 120 days of being sober. I’m feeling extremely healthy and in a great mind frame. I feel extremely motivated and ready to tackle life head-on and in a constructive way.”

The 36-year-old ex-star from Harare plans to spend more time at home on his recovery path as well as venture into charity work, to eventually return to full-time cricket in some capacity once his ban lapses.

“I’m back home now, three weeks of really enjoying time with my family, spending time and giving back to them,” remarked Taylor.

“I missed a lot of the time when I was either touring or I was in a depressive state and under the influence. It was a very dark period so, you know, I’m just taking that in and being grateful for what I still have, and that is health and family and some good people around me. I have big ambitions and big goals after coming out of the treatment centre. I’m forming a foundation, Brendan Taylor Foundation, which will put the compassion into action. So I’m going to be doing a lot of physical events to raise money and change the lives of less fortunate people than myself. I have big ambitions to be a motivational speaker and to help and give back to communities, to make young children and fully-grown adults aware of where their addictions can lead them to. Alcoholism is a dark place and unfortunately it is rife in our communities. The more people can share the message of experience, strength and hope – it can only be a positive one and hopefully our young generation don’t go down the same path as I did. I mean, granted it happened in the later stages of my life, but addiction doesn’t wait for anyone. It can happen at a young age, middle age, old age, it doesn’t matter. It tears lives apart, it tears families apart.

“I’m fortunate I still have that in place. But I was on a very fine line before things got very ugly and it can damage your health and your family and it’s potentially fatal. So I’m so glad that I now…I felt that I’ve overcome it. It’s still a journey, it’s still a process. I try to win each day at a time. I take nothing for granted. I embrace the challenge. I have a very open and willing mind to get out there and better myself each day. That’s the simple mindset that I have.”

Taylor abruptly announced his immediate retirement from cricket last September on Zimbabwe’s tour of Europe, weighed down by his addiction problems and the ICC probe against him, hitherto unknown outside inner circles.

For a player who retired just 62 runs short of being the third Zimbabwean to score 10 000 runs in international cricket after the famous Flower brothers Andy and Grant, Taylor’s place in the history of the game in his homeland was well and truly secure. Bowing out on such a note in the end, therefore, was a cause of great distress for the former wicketkeeper.

He, however, believes he can still salvage something from the wreckage of misfortune and recover from his fall from grace.

“I guess every player, or every person, would want to leave a legacy and that was certainly my intention,” said Taylor.

“Unfortunately with my life spiralling out of control with the blackmail and the Indian saga, you know, that is when my life took a turn for the worse and I didn’t know how to combat that. I didn’t talk to anyone about it. I didn’t…I tried to shoulder it myself and it just became too much to bear. So, you know, that’s one part of my chapter done in terms of my cricketing journey. I still have ambitions to give back to cricket.

“I’m still in the process of erecting two cricket nets at my house to coach young children, so I’m still very passionate about cricket. It’s something that gave so much to me. I would want to give back to cricket and certainly make that part of my life. I want to branch out and do as many positive motivational things to benefit others. So, I believe, my legacy will be a bigger one than when I was playing cricket because I see that as a powerful tool to help people that are suffering depression or going through addiction or have illnesses – cancers, you know, there are many things I’m looking to target to give back to other people and change their lives. So I still believe that I’m very fortunate to have a platform to do that and through my foundation, we’re going to do extremely big things to make our community better and hopefully spread the message to others to kickstart some kind of their own foundation, or just getting out there into the communities and reach out to people that are suffering and have less than we do. So, to me, a little bit of effort will go a long way. I’ve big ambitions to make a big impact.”

The NewsHawks has over the months extensively covered stories of substance abuse in society, particularly the consumption of illicit drugs and illegally-produced alcohol among unemployed youths in disadvantaged black townships.

It is different though, in the case of Taylor. He hails from a well-to-do family background, even by the average standards of the country’s privileged white community.

Substance abuse, however, has not spared the leafier neighbourhoods of Zimbabwe’s capital city.  Because family earnings have been eroded over the years and savings eaten up by the country’s economic meltdown, some older and younger generations from once prosperous suburban households have also turned to low-priced illegal substance for solace.

Again, with Taylor, things are distinctly different. Since his return to Zimbabwe in 2017 from English county team Nottinghamshire, Taylor was on a monthly salary of over US$20 000, the African team’s highest-paid player, therefore able to afford more expensive substance.

But, according to the record-breaking ex-Zimbabwe batter, addiction is addiction, an illness, posing the same dangers. All Taylor needed to do in the end was to confront his fears and demons, whilst involving others, to mend his ways.

“What I’ve learnt in my journey so far and certainly the last three years of my life was that it is totally manageable, and it’s a very dark environment to be in if you shoulder this on yourself,” commented Taylor.

“It is too powerful to carry everything on your shoulders, whether you’re going through alcohol or drug addiction or you are in depression. My only plea is that there is help out there and I will encourage people to talk, because I didn’t do that. I believed I could shoulder it for a long period of time and it just became too much and then my health really took a dive. There were serious signs there regarding my health, so my plea would be not to leave it too late and talk about it. What I can assure people out there that are suffering is there is help. There are many people that have gone through the toughest times of their lives, pulled themselves from the bottom of the barrel to bounce back and come back even stronger than they were before. So it’s not all lost. It’s a process to fight, and to have the love and support outside. The stigma attached is not there once you start talking. There is nothing to be ashamed of because it is a disease at the end of the day and people fall victim to that. That is the harsh and sad reality about it, it takes no prisoners and if you don’t see and surrender for help, it only gets worse. It’s a very serious problem that we have in our community and around the country. So I have big ambitions to set things up and help others.”

Taylor has also acknowledged solidarity from around Zimbabwe and the rest of the cricketing world following his ICC ban, saying it has helped him through his healing process.

“My message in response to the fans, and generally people that aren’t necessarily fans but just cared, my family, everybody – their support, love and strength – have played a massive part in my recovery,” he said.

“It has been very humbling to have that. I’m eternally grateful to have that and I just want to thank everyone from the bottom of my heart for taking their time when they have their own busy schedule and lives to worry about. To reach out and offer their support, through definitely the darkest period of my life, where I didn’t know where I was going, was massive. I was only sinking into a deeper hole. That certainly uplifted me, and it certainly solidified the mindset to continue getting that hope, to continue growing each day and for that I will never forget, and I am truly thankful to everyone. I have put that in one of my (previous) statements, but this is just to reiterate the amount of gratitude that I have towards the wider public, my family, friends and the people that have been so kind, a lot of them people I’ve never met before but who supported me every step of the way. I thank them from the bottom of my heart.”

What next for Zimbabwean football?