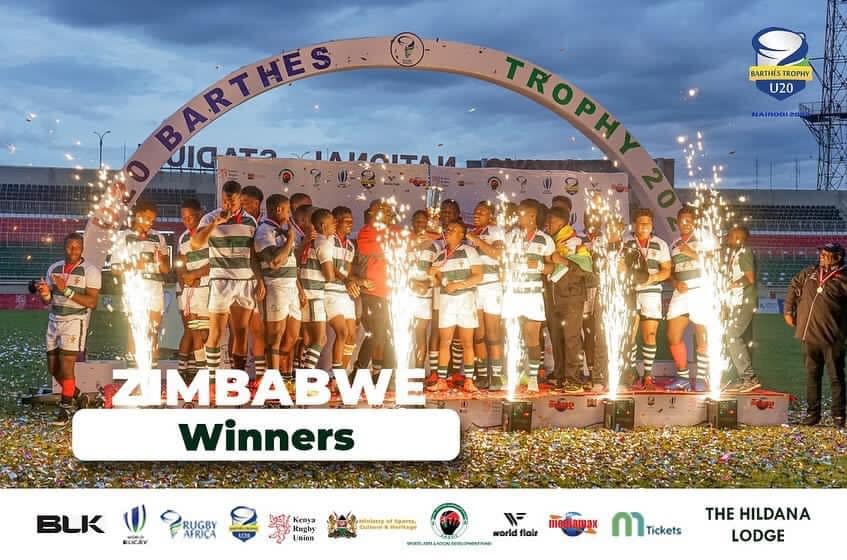 FOR me, my main hope was that the significance of playing on the home turf of Siya Kolisi and Makazole Mapimpi would not be lost on Zimbabwe’s young newcomers against Border Bulldogs in East London last weekend.

It is in these predominantly rural settings that South Africa’s World Cup-winning captain, and the first player in the history of the Springboks to score a try in a World Cup final, were thrown a rugby ball for the first time and taught the game.

The Eastern Cape is a pretty unique place in South Africa. Where other youngsters like them across the country will be playing football on the streets, in this province disadvantaged black boys in the townships and rural areas play rugby with great zeal on dusty open spaces.

It is a natural thing, rugby is their number one sport. They were born into it and it runs deep in their DNA. For some of these underprivileged kids in Eastern Cape, fathers, grandfathers, even great grandfathers, played rugby.

This dates back nearly two centuries ago when rugby and cricket were introduced in black missionary schools by the province’s moderate white administrators and, fittingly, on top of producing the Springboks’ first black captain in Kolisi, the Eastern Cape also gave the world Makhaya Ntini, South Africa’s first black international cricketer.

They call it the cradle of black rugby, the Eastern Cape, and it is indeed a shining symbol of hope despite the game still being under-funded and perennially in financial woes over there.

The pride of the province, Border Bulldogs – the only 100% ethnically black team at the top end of South African rugby – was only allowed on the last minute to take part in this season’s Currie Cup First Division following uncertainty over funding.

Because they are broke, Border are currently under the administration of the South African Rugby Union (Saru).

But that does not take away the love and passion for rugby among Eastern Cape folks.

If you want a memorable and truly unique African atmosphere to watch a sporting event, try the Sisa Dukashe Stadium in East London when Border are hosting.

Not even the province’s main football team, Chippa United, who share the Sisa Dukashe Stadium with Border, are able to consistently draw such good crowds.

Win or lose, as their team often do these days – both young and old, male and female – the Border faithful sing and dance in the stands in absolute veneration of their local heroes.

One thing for sure, in defeat or victory, the Border players will always exhibit their brave and entertaining brand of rugby, and they lose like winners.

And last week, a couple of young men from Zimbabwe, who are also getting accustomed to winning, graced the Sisa Dukashe turf and left victorious alongside their more experienced teammates.

The biggest takeaway for me in Zimbabwe’s 18-8 win over Border, from a development point of view, was the presence of these Young Sables and their contribution to the result last Sunday.

Winning becomes a culture, a habit. Flying these boys over to South Africa for the remainder of the Currie Cup, following their superb performances to help Zimbabwe become Under-20 African champions in Kenya last month, was a masterstroke by the senior team management.

The majority of these glorious Young Sables come from middle to low-income households, which amplifies their hunger and drive for success.

And in their Zimbabwe Under-20 coach Shaun De Souza, they have the perfect role model a group of focused young men need to complement their own effort and determination.

Shaun was a very good player himself, a leader of men since his playing days in the great Old Hararians and Zimbabwe sides of the late 1990s to 2005.

The former Sables star backliner has an inspirational story to tell, overcoming his own challenging upbringing in Arcadia and the Avenues, both tricky neighbourhoods to raise a child, then life in an orphanage in his teen years.

But then De Souza has always stayed true to himself, never takes anything for granted, grabbing with both hands the opportunities that have come his way from a young age.

From St Joseph’s House for Boys, a fairly comfortable orphanage in suburban Harare where boys are given all the support and platform to prosper in their chosen fields.

Also the opportunity to go to Prince Edward, in the peak era of the school, shining in rugby and breaking sprinting records on the running track, going on to play Test rugby for his country and captaining it on a few occasions, and then now laying down a marker as a coach.

A devout Muslim guided by strong faith in whatever he does, De Souza has now transformed a group of working-class boys into champions, and personally I back quite a few of them to be on the flight to France for the senior Sables’ World Cup qualification bid in July.

Two of them, the Young Sables’ triumphant captain Taku Musingwini and star winger Tavonga Ablant, starred in the win over Border last weekend and displayed mature heads on their young shoulders.

A good international rugby team needs a core of experienced players surrounded by a group of fearless younger players who rise in pressure moments. These two represent those qualities.

The respect that you earn from winning a big tournament is huge and for Musingwini in particular to be trusted on his senior team run-on debut at flyhalf, the chief decision maker of the team, was massive.

Cool, calm and collected, the young number 10 did not disappoint at all on Sunday, orchestrating both attack and defence well and making sure Brendan Dawson’s charges played in the right areas of the pitch.

At Prince Edward where he became headboy in his final year, Musingwini was not among the best players in his earlier years but he just got better and better, and now he has led his country in conquest of a continent.

Interestingly, Musingwini’s second-half replacement, Keith Chiwara, is also a winner. The University of Fort Hare flyhalf was a key player in the Blues side that won the Varsity Shield in April following an unbeaten season.

With more players like these continuing to join, getting used to losing will start to be treated with contempt in the Sables environment.

You have to want it, like Ablant, the boy with the heart of a lion, straight out of Mbare, where life is not also particularly easy. He played the entire game against Border last weekend and was a livewire on the wing, strong on both attack and defence.

And like his Under-20s coach De Souza, Ablant knows his background, and how to make the most of opportunities presented to him.

From Mbare Academy where he started under development coach Victor Pekani, a humble and unsung hero of rugby in this country, Hillcrest College came calling and offered him a full scholarship, exceling both on the sports fields and in the classroom at the Mutare private school.

In Manicaland, Ablant was fortunate to come under the wing of the then Hillcrest deputy headmaster and sports director Crispen Mhike, who has now returned home to Harare to head Heritage School.

There are so many decent people involved in this sport and Cris, who coached Hillcrest’s first rugby team for a number of years, accommodated the youngster from Mbare in his house, grooming him as his own son.

Then the other good guys, Kyros Sports, facilitated a move for Ablant to Maritzburg College in Pietermaritzburg, South Africa, where he was also an exemplary student and top sportsman.

Now Ablant, alongside his skipper Musingwini, will soon depart for university on full scholarships in the United States, where their meteoric progress will continue, hopefully to culminate in a fairy tale similar to that of Kolisi and Mapimpi, the Eastern Cape’s favourite sons.

Taylor: ‘My life was spiralling out of control’