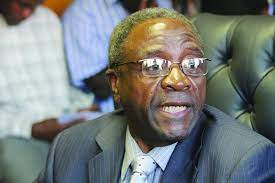 Dube was one of Zimbabwe’s biggest earners, taking home an astonishing US$230 000 monthly from Psmas and its subsidiary PSMI before he was forced to resign in January 2014.

Three judges of the supreme court, Justices Lavender Makoni, Nicholas Mathonsi and Alfas Chitakunye, found no merit in his appeal and threw it out.

The Labour Court had earlier quashed the US$3.5 million arbitral award granted to Dube in a contractual dispute with Psmas.

Dube won the arbitral award against Psmas in April 2015, entitling him to a monthly salary and benefits backdated to January 2014.

But the Labour Court set aside the two awards.

Aggrieved by the Labour Court’s decision, Dube took the matter up to the Supreme Court, appealing the judgement.

Psmas is a medical aid society registered in terms of the Medical Services Act and PSMI is the investment vehicle of Psmas.

Both entities are managed by two separate boards of directors.

Dube was the CEO of Psmas in terms of a contract of employment. According to court documents, he also drew a salary from PSMI under unclear circumstances.

Dube reached retirement age at 60 in December 2013 in terms of Psmas rules.

On 14 March 2013, the boards of directors of Psmas and PSMI unanimously extended Dube’s tenure of office by a further 10 years.

At the beginning of 2014, Dube commenced the extended employment contract.

The parties also reached an agreement that Dube’s monthly salary would be US$60 000 per month effective January 2014 along with other benefits. It was later reduced to US$43 000.

Following the allegations that he was taking an exorbitant salary of US$92 000 every month, before monthly allowances, without the knowledge of the full boards, except two directors, the boards withdrew their earlier decision to extend Dube’s contract of employment.

Psmas and PSMI relied on provisions of the entities’ retirement policy to rescind the extension of the employment contract.

Dube was thus requested to go on pre-retirement paid leave.

In response, Dube, through a letter in February 2014 addressed to Psmas, claimed that he had a subsisting contract of employment for a period of 10 years which commenced on 1 January 2014.

He insisted that the contract had not been terminated in any way and vowed to continue executing his duties in line with the extension. Consequently, a dispute arose between Psmas and Dube.

On 17 February 2015, the dispute between Dube and Psmas was referred to compulsory arbitration.

The terms of reference were to determine whether or not Dube’s contract of employment was lawfully terminated and the appropriate remedy.

In the matter, the arbitral award was to the effect that the contract of employment between Dube and Psmas existed and thus remained in force.

The arbitrator further ordered that Psmas pay all salaries and benefits from the date these were last paid on the scale of US$92 000 per month.

In the matter between Dube and PSMI, the arbitral award was to the effect that Dube’s contract of employment was enforceable against PSMI and that the contract was never terminated, thereby finding that Dube was entitled to salaries and benefits as claimed.

Aggrieved, Psmas and PSMI appealed the two arbitral awards at the Labour Court. The two appeals were consolidated for the sake of convenience.

In the heads of appeal, Psmas and PSMI argued that “the arbitrator made a determination that ran foul of the issue presented before him.”

PSMI said the arbitrator missed the import of issues referred to him and also that it was simply the investment vehicle of the first respondent and used to contribute to the appellant’s salary at the request or on the instructions of Dube.

But the Labour Court reasoned that it was clear in the parties’ minds that the contract of employment had been terminated and what required determination was whether or not such termination was lawful.

The court also ruled that the arbitrator fell outside the terms of reference by making a determination that the contract of employment still subsisted and remained in force.

Dube approached the Supreme Court, arguing that the Labour Court had misdirected itself and erred at law in finding that the decision of the arbitrator that there was still a subsisting contract of employment between him and Psmas was outside the arbitrator’s terms of reference.

He argued the Labour Court erred in finding that there was no binding contract of employment between him and PSMI. But his argument did not find favour with the upper court.

The judge said, indeed, the arbitrator misdirected himself by concluding that the contract was never terminated.

“It was not within his remit to exceed his mandate. The arbitrator misconceived the whole nature of the inquiry or his duty in connection therewith. Thus the first ground of appeal has no merit and must fail,” he ruled.

He added: “I find nothing to confirm the existence of a contract of employment with PSMI and there are strong indications that there was no such agreement.

“Indeed, Dube has not set out what the terms of this agreement with PSMI are . . . thus the court a quo’s finding that there was no contract of employment between the appellant and PSMI and consequently that there was no entitlement for payment of the alleged salary due to him, cannot be faulted.

“In light of the above, the second ground of appeal being unmeritorious must fail. Costs will follow the cause. The appeal be and is hereby dismissed with costs,” concluded the judge. — STAFF WRITER.