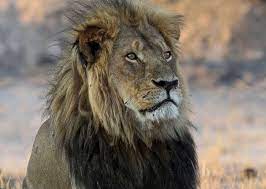 THEIR stories and circumstances of life maybe different, but they have one thing in common: They were both killed by American trophy hunters.

Trophy hunting is a controversial sport involving stalking and killing of wild animals as trophies.

The killing of Cecil the Lion on 2 July 2015 around Hwange National Park caused global outrage it was collared and was being tracked and studied by a research team of the University of Oxford as part of a long-term project.

On the night of 1 July 2015, Cecil was wounded by an arrow by Walter Palmer, an American recreational big-game hunter, then tracked and killed with a bow and arrow the following morning, between 10 hours and 12 hours later.
Cecil was 13 years old.

Palmer had a permit and was not charged with any crime; authorities in Zimbabwe said he is still free to visit the country as a tourist, but not as a hunter.

Two Zimbabweans, the owner of the safari concession and the hunting guide, were briefly arrested, but the charges were eventually dismissed by courts.

The killing drew international media attention, caused outrage among animal conservationists, criticism by politicians and celebrities and a strong negative response against Palmer.

Now another male lion known as Mopane has been killed in a hunting area on the outskirts of Hwange National Park. The lion was targeted by a bow hunter in the same area that the renowned Cecil was killed.

Mopane, which was not collared, was a 12-year old pride male with a litter of six cubs.

The trophy hunter who killed Mopane is Phillip Smith from the United States.

Mopane was feeding on a bait (a dead animal used to lure the trophy lion into a position where the hunter could shoot him), which is not allowed.

Almost every year, a dominant pride male in that environment is taken out hunters.

Anti-trophy hunters say this is appalling.

Conservationists argue as a result there is significant impact on pride dynamics.

Trophy hunters and their supporters say it is legal and permissible.

When male lion leaders are killed, their prides become vulnerable and that often causes conflict as other hostile males move in resulting in bloody disruptions of normal life – loss of lionesses, weak males or cubs taken out by the new males, usually to force females into oestrus or heat to mate and breed again.

Dispersal of frightened lions fleeing creates potential human-wildlife conflict with communities living on the borders of the park.

Many argue that the current level of lion hunting is not sustainable in the area bordering Hwange National Park.

Before he was targeted, Mopane had formed a coalition with another male named Siduli.

On 10 August 2019, World Lion Day, Siduli was shot and killed by hunters on the outskirts of the park.

Of the 62 Hwange lions (28 males and 34 females) tagged during a five-year (1999 to 2004) research project by Oxford University’s Wildlife Conservation Research Unit, 24 were killed by trophy hunters.

Of these, 13 were adult males and six were sub-adult males.

“All decisions by ZimParks are science-based in contrast to critics of hunting who want to offer untested methods in wildlife management. The wildlife population in the country is generally healthy and this is a result of a good management process since the first park was created in 1928 to the present day management under the leadership of Dr Fulton U. Mangwanya,” he said.

“Over the years the country has witnessed the mushrooming of Western sponsored NGOs who in most cases raise money in the name of wildlife management for their personal benefit. In 2015, a lion called Cecil was hunted and it generated a lot of publicity on false information. It is important to note that the Cecil hunt was legal, as the recent lion hunt in Hwange (Mopane).”

Farawo said it was critical for wildlife management and economic development.

“Hunting plays a critical role in the development of the country and is one of the mainstay economic activities that generate on average US$2.1 million every year in Campfire projects in 58 districts in the country and benefit about one million people. Thus, banning hunting without provision of alternative modes of conservation financing will have severe negative impacts on community livelihoods, rural development and general wildlife conservation.”