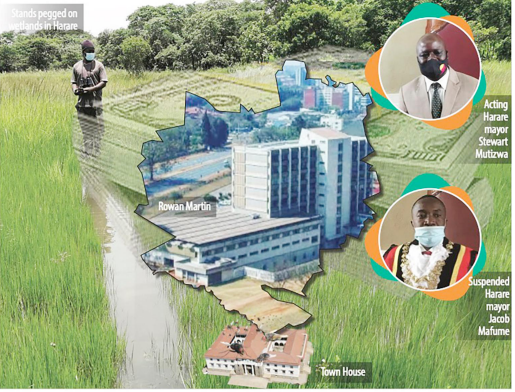 A POORLY managed commercial and residential land database at the City of Harare has left the capital acutely vulnerable to systematic fraud that is benefiting corrupt council officials, investigations have revealed.

Investigations by The NewsHawks in collaboration with Information for Development Trust (IDT) — a non-profit organisation supporting local and regional investigative journalis — established that officials from the housing, estates and valuation, as well as city planning departments were cashing in on the shambolic land bank.

The land bank is supposed to regularly update data relating to the management of city plots and how much is available, under use and the manner it is being utilised.

But, it was discovered, the municipality has failed to maintain proper land bank records for a long time, making it easy for corrupt employees and councillors to receive bribes and allocate plots without following laid down procedures.

Relevant departments were not submitting critical information relating to how commercial land was being sold, it emerged. Council officials and councillors work in cahoots with land barons to identify idle spaces that have not been updated in official records.

The barons then advertise the pieces of land through backyard agencies, targeting commercial investors and desperate home seekers. The councillors and municipal employees use fraudulent means to generate paperwork necessary for the sale of the land and get kickbacks for the jobs. Now and then, beneficiaries of the improper land sales fall victim to scamming.

One such victim, who refused to be named as he was still pursuing official channels to expose the scammers and recover his money, lost US$15 000. He said he went looking for a commercial plot at Rowan Martin building, where the council employee who attended him informed him that there was no land available for purchase.

He left his phone number with the official who promised to update him and, later, received a call during which the council employee supplied him with contact details of a land baron. The land baron further referred him to a councillor, who then led him to another council worker.

He was taken to an open stand, the “paperwork” was done and he parted with the money, but later discovered that the documents he signed for the plot he had been sold just outside the city were fake.

The NewsHawks went underground to find out how the fraudsters operate. This reporter first called a former councillor inquiring after a commercial plot. He was initially hesitant because he knows this reporter, but later agreed to supply the mobile number of another former councillor who had been recalled by MDC-T for aligning with a rival party led by Nelson Chamisa. This second councillor, in a recorded phone call, led this reporter to a female council employee who readily agreed to a meeting.

“Get this number and talk to that person (the lady). Tell her I referred you, but know that this is not for free. You will have to pay between about US$70 and US$80 if you are serious,” the former councillor said. The female employee directed that the meeting take place in the Rowan Martin Building parking space in downtown Harare and she came in the company of a male colleague.

She asked for US$150 to help the reporter jump the queue on the residential waiting list by providing the necessary paperwork, and the journalist promised to return with the money. “We will bring authentic receipts and the papers to you.

Don’t worry, we will sort it out,” the woman, whose identity is being withheld for now to protect our sources, said casually. During the short period spent with the female council employee, she attended to more than 10 other visitors in clearly hush-hush fashion.

Several people interviewed confirmed they were seeking the female employee’s help and walking away with what seemed like authentic documents.

“That is why you see even in areas where demolitions end up happening, victims will be having papers from the council with stamps and everything. This is the work of these cartels,” said a tout who was helping home-seekers.

“Our land bank is in shambles. We do have it, but it is not in order. In terms of monetary loss, we have lost billions of (local currency),” Mutizwa said.

He accused cartels of manipulating the land records to their own advantage. Mutizwa suspects that most of the land fraud is happening within the works and planning divisions. The head of planning at the City of Harare, Priscilla Charumbira, who is wife to Fortune Charumbira, the Chiefs’ Council president, was last year arrested for allegedly changing land use plans for several open spaces in the capital irregularly.

An August 2019 audit by a special council committee notes “criminal” negligence in the management of the City of Harare land bank, implicating relevant offices of facilitating murky land sales. The seven-member ad hoc committee led by Charles Nyatsuro, one of the councillors, was set up to audit the land bank.

The committee quizzed several senior council employees, among them the finance director, Stanley Ndemera, the estates and valuations manager, Emmanuel Mutambirwa, his deputy Peter Dube and officials from the chamber secretary’s office. Ndemera, Mutambirwa, the housing director, Addmore Nhekairo and two other officers in the estates division were subsequently suspended and have pending cases at the courts for alleged abuse of office by parcelling out stands meant for recreational purposes to private parties. The special committee noted in its report that the officials it quizzed confirmed the existence of land cartels.

“There is a high risk of fraud considering that all people who testified before the committee noted that there were cartels operating, especially in the estates and valuations departments.

“The audit manager noted that this risk had been identified, but nothing had been done,” the report reads. Two years on, the special committee is livid that its recommendations to clean up the land bank and take corrective action against irregular land sales have been ignored by the MDC-T-dominated council.

“The findings that the committee received point to the fact that the Director of Housing`s office might be captured by a group of cartels. This was corroborated by one of the directors,” the report noted.

“After extensive enquiries, we established that the city does not have a credible land bank. The evaluations team dithered on the question of storage of the land bank. A tattered old book was presented to the committee as . . . city’s land bank,”

The tender formulation and adjudication committee comprising all municipal department representatives approves proposals for lease and sale of land, including the issuance of a tender in terms of section 152 of the Urban Councils Act (Chapter 29:15).

“We observed that this process has been relegated and is not followed by council officials,” revealed the special committee report.

The estates and planning teams could not produce a list of properties that had been sold by council, a development the committee described as “incredible and unacceptable”.

“The special committee was informed that non-council employees and cartels have taken over the council processes and can be seen moving from one office to another processing the lease and sale of council land,” noted the committee.

The committee bemoaned the shambolic state of the estates department.

Part of the committee report screenshot

It also suggested that the internal audit team must institute a probe regarding how the land bank was being managed. Several car sales and businesses across the city had not followed procedure in the manner they acquired land.

The illegal allocations of car sale space by Harare City Council officials came to light after demolitions by the same local authority that led to the car dealers exposing illicit deals.

The car dealers claimed that council officials were demanding US$3 000 bribes. Car sales have controversially been set up along Josiah Tongogara, Emmerson Mnangagwa (formerly Enterprise) and Glenara roads, among other places.

Suspended Harare mayor Jacob Mafume said cartels have taken over the processing of land in Harare, with beneficiaries mainly being those with “ready cash.”

“People who are getting the prime commercial land are in two groups — the Chinese and those who operate on the black market. “Land is overpriced systematically such that those without money cannot afford it and only those involved in black market and other deals benefit and keep the land,” Mafume said.

— This investigation was produced in partnership with the Fojo Media Institute and International Media Support.