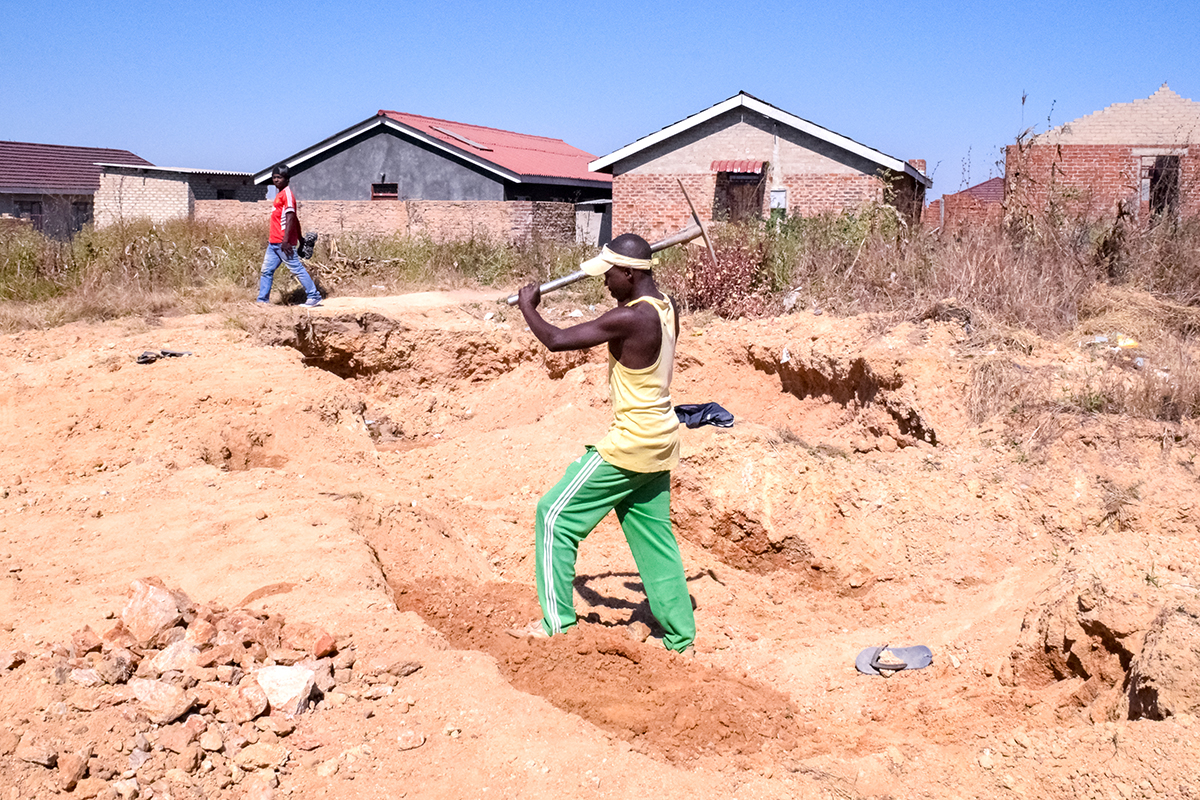 THE Great Green Wall Initiative — the game-changing African-led project to restore the continent’s degraded landscapes and transform millions of lives in the Sahel — is now expanding down to southern Africa where land degradation and drought are on the rise as climate change worsens.

Created by African Union leaders in 2007, the Great Green Wall for the Sahara and the Sahel Initiative is aimed at combating desertification and tackling the impacts of climate change.

The ambitious project — with an initial target to plant an 8 000-km stretch of trees covering 11 countries from Senegal in the west to Djibouti in the east — seeks to alleviate hunger, create jobs and reduce conflict across the Sahel.

In addition, the initiative is expected to restore 100 million hectares of land — nearly the land size of Egypt — while capturing 250 million tonnes of carbon and creating 10 million green jobs.

It has hit the mark on achieving some of its ambitious goals and presented an update on progress made at the United Nations Convention to Combat Desertification (UNCCD) 15th Conference of Parties (COP15) in Abidjan, Côte d’Ivoire, last week.

To date, the initiative has met 18% of its targets which has seen the planting of one billion trees and creation of more than three million jobs and 250 000 natural resource-based enterprises, Dr Paul Elvis Tangem, Great Green Wall Initiative coordinator at the African Union Commission.

From the Sahel to the South

“We have made great progress,” Tangem told The NewsHawks on the sidelines of the UNCCD COP15, saying the success of the initiative has provided key lessons to southern African states now pushing for an expansion of the programme to their region.

“Zimbabwe is one of our targets,” he said, adding: “We have learnt a lot in the past decade from what we have done in the Sahel and the Sahel is getting better visibility and resources that we are moving down south where the phenomenon of drought and desertification is getting critical and becoming an existential threat.”

Drought is recorded as the most common natural hazard occurring in Zimbabwe between 1982 and 2011, accounting for six out of 10 top major natural disasters. Agro-ecological regions IV and V, which include Matabeleland North, Matabeleland South, Masvingo and part of Manicaland provinces, are the major areas regularly affected by drought, according to the National Plan for Drought for Zimbabwe.

Between 1950 and 2013, Zimbabwe experienced 22 droughts whose frequency has been attributed to climate change.

The droughts experienced in 1983 and 1992 were classified as extreme droughts, while those in 1982, 1967, 1968 and 2004 were considered to be severe droughts whose impact was felt particularly in the agricultural sector, triggering famines, food crisis, water scarcity and economic decline.

The latest droughts in Zimbabwe have been experienced in 2016 which forced the government to declare a state of national disaster while, in 2019 was another drought year which ignited a worse hunger crisis in nearly a decade. The 2021/2022 is pointing to a drought year following poor rains and a long dry spell. The government has estimated a 50% drop in the harvest of the staple, maize.

Zimbabwe has developed a National Drought Plan to establish a framework for the country to conduct an effective, coordinated and appropriate response to drought that minimises potential adverse impacts.

Prosper Matondi, national co-ordinator and chief director of Environment and Climate Services in the ministry of Environment, Climate, Tourism and Hospitality Industry, said Zimbabwe is currently reviewing the drought policy outlining government responsibilities in responding to natural disasters and reviewing its capacities, as well as structures to deal with drought preparedness, mitigation and response.

Inspired by the Great Green Wall of the Sahel and Sahara Region ministers responsible for environment and natural resources in the Southern Africa Development Community approved the establishment of the initiative in the region in 2015.

A strategy developed for this initiative was adopted by the heads of state and government summit in Harare in 2019, paving a way for the roll out of the initiative in the Sadc countries.

“Last week we completed the strategy which is currently being printed and we will be launching it soon as we are now working with all Sadc member states to develop international action plans to realise the programme in their countries,” Tangem said.

The UNCCD defines land degradation as the persistent or long-term loss of land-based natural capital which increases poverty, hunger, and environmental pollution. Land restoration refers to a continuum of sustainable land and water management practices that can be applied to conserve natural areas, “up-scale” nature-positive food production in rural landscapes, and “green” urban areas.

The Sadc region presented a communique at the recent UNCCD COP15, giving a roadmap on implementing the Great Green Wall Initiative in Southern Africa.

“We have agreed that we were going to restore 240 million hectares of land by 2063 in Southern Africa targeting the 16 countries because none of these countries are spared land degradation,” he said.

He added the initiative would need between US$40 billion and US$50 billion to implement.  It costs up to US$550 to restore a hectare of land per year.

There is interest from an array of private and institutional donors to finance the initiative roll out in southern Africa as investors perceive the region to be more stable and land tenure is not an issue unlike in the Sahel.

“We have people waiting to roll out carbon capture projects and others in hemp oil and other medicinal products, softwood and macadamia nuts,” Tangem said, adding that: “We are looking at promoting value chains for forest products so that people will avoid cutting trees. When trees provide

fruits and income people realise that trees are better alive than as firewood.”

Drought on the agenda

The threat of drought, desertification and land degradation highlighted discussions at the recent UNCCD COP15 which concluded with a global pledge to boost investment in land restoration and drought resilience to the future of humanity.

The UNCCD COP 15 adopted 38 resolutions to improve drought resilience, reduce land degradation, and invest in land restoration efforts, including an agreement to accelerate restoration of one billion hectares of degraded land by 2030.

Leaders at the conference further agreed to boost drought resilience by improving a new partnership model for large-scale integrated landscape investment programmes, while improving national policies and early warning systems. They also agreed to establish an Intergovernmental Working Group on Drought for 2022-2024 to support a shift from reactive to proactive drought management.

The Great Green Wall Initiative has promoted land restoration as a tool to deal with drought. Global leaders have committed to land restoration efforts covering one billion hectares of land as part of the UN Decade on Ecosystem Restoration.

“Through the Great Green Wall Initiative we have managed to craft an international policy on desertification, on drought and on land degradation and member countries have realised the need to work together in mobilising resources because Africa’s development will be based on the sustainability of its land,” Tangem said.

A drought of action and dollars

Describing COP15 as having been successful in mobilising political will to tackle threats posed by drought and land degradation, Tangem said it remained to be seen if global leaders will expedite action and put money on the table.

The African group of negotiators at the UNCCD recommended a binding protocol on drought that every country should sign. The proposed protocol was not adopted as member countries wanted time to study the document before endorsing it.

“The drought protocol is expected to be presented at the next UNCCD in 2023,” Tangem noted. “We are sure if we have a binding protocol then drought, land degradation and desertification will be like climate change and automatically attract investment even when we remember the climate change COP with a US$100 billion promise that nobody has ever seen.”

The UNCCD is one of the three Rio Conventions — along with the UN Framework Convention on Climate Change and the Convention on Biological Diversity. The programme of action of the UNCCD was adopted at the 1992 UN Conference on Environment and Development. The convention entered into force on 26 December 1996, and currently has 197 parties.

By merely implementing the Great Green Wall Initiative, Tangem noted, Africa had the best tool to fight climate change because land restoration is about restoring biodiversity.

A new report, Drought in Numbers, released during COP15, shows that between 1900 and 2019, droughts have impacted 2.7 billion people in the world, and caused 11.7 million deaths.

Current forecasts estimate that by 2050 droughts may affect over three-quarters of the world’s population.

“Droughts have been part of human and natural systems, but what we are experiencing now is much worse, largely due to human activity,” Ibrahim Thiaw, UNCCD executive secretary, told delegates at the Desertification and Drought Day during the UNCCD 15th COP.

The UNCCD’s evidence-based flagship Global Land Outlook has warned that the way land resources – soil, water and biodiversity – are currently mismanaged and misused threatens the health and continued survival of many species on earth.

If the current business as usual attitude continues through 2050, the report projects additional degradation of an area almost the size of South America. At COP15 countries pledged to restore one billion degraded hectares by 2030 which requires US$1.6 trillion this decade.

·       This story was produced for The NewsHawks as part of a virtual reporting fellowship to the UNCCD COP15 supported by Internews’ Earth Journalism Network.

Related Topics:Climate changeEnvironmentLand degradation in Zimbabwe
Up Next

I will keep on working with Zanu PF government: Mtizwa