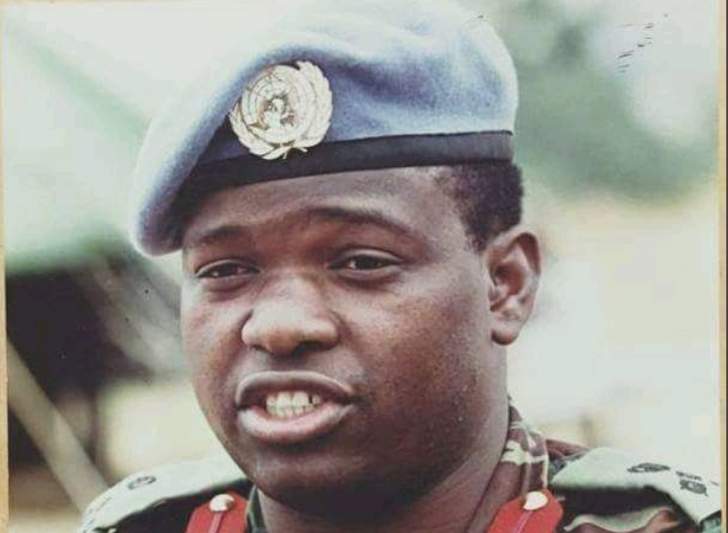 IN life as in history, there are critical junctures that define how a situation pans out and its outcomes. They are often marked by heightened contingency; characterised by historical moments, dramatic events and a turning point.

OWEN GAGARE
For the late Foreign Affairs and International Trade minister Sibusiso Busi Moyo, who died on 20 January in Harare, two events significantly defined his life and career: the recruitment of 400 Manama High School students by Zipra guerrillas on 30 January 1977 and announcement of the military coup that ousted the late former president Robert Mugabe on 15 November 2017.

Although these events were 40 years apart, they defined Moyo’s life history and career path in many ways. Interestingly, when Moyo was being seized with other children from school in Manama in Gwanda, Matabeleland South province, as a teenager to join the liberation struggle, Mugabe was about to seize power at the helm of Zanu after a two-year interregnum without settled leadership.

Despite the Mgagao Declaration in October 1975 which affirmed support for Mugabe to oust founding leader Ndabaningi Sithole, Zanu had not had a substantive leader since Sithole was removed in a prison coup in 1974.

Moyo’s story is as gripping as his rise to the top.

Born on 20 November 1961 at Mnene Mission in Mberengwa, Moyo grew up in a rural village with his parents and seven siblings. He was the third born in a family of eight.

His father Cephas John Moyo has described him in the media, including in the state-controlled daily The Herald, as a sturdy and studious child, yet quiet boy. He did not like mixing and mingling with other kids until when he joined a school church choir. He always played on the fringes. But in all that he showed personality traits which would define him and his life – he was observant, calculating, liked commanding other children, issuing instructions and having the final say.

Such was his bravey and self-assured bossy attitude – which sometimes exuded toxic masculinity – that he would even deny that his elder sister was older than him. He could not imagine as a kid that a woman could be older than him.

Moyo grew up as a tough rural boy who did all the rustic activities done by other kids with his sisters, brothers and friends. His father says he always wanted to finish his job – he was hands-on – ahead of everyone else and take the lead.

As a result, the father says, he showed clear intelligence and leadership qualities at a tender age. These became some of his enduring character traits. He was good in maths and his father desperately wanted him to be a doctor, but fate had other plans for him.

Even though he was to arrive in the liberation struggle at only 16 years old and return home after the war at 19, his willpower and brainpower carried him through to the top. His bitter fight with Rhodesian instructors in Guinea Fowl in Gweru when they tried to downgrade former guerrillas in ranks during re-training upon his return in 1980, defined his stubborn and daring persona.

At the time of his death two days ago, at 60, he had risen well above his mentors and peers, including those who trained him in Zambia.

But it had all started on a scary and dramatic day on 30 January 1977.

The Lutheran Church had built six sister missions, with schools and hospitals in Midlands and Matabeleland South: Chegato, Mnene, Musume, Masase, Manama and Zezani. The first four are in Mberengwa in the Midlands, while Manama is in Gwanda and Zezani in Beitbridge.

The schools came to define secondary education in those areas over decades and produce great students who went on to distinguish themselves nationally and beyond.

Arriving at Manama at the beginning of 1975 as a boarding student, Moyo was only 14 at the time doing Form 1.

One of his classmates and close friends was Albert Nguluvhe (spelt Ngulube in Ndebele, but Nguluvhe in Venda), current Beitbridge East MP who was Mugabe’s close security boss as National Security Director in the Central Intelligence Organisation (CIO).

They sat at the same desk in class. Moyo and Nguluvhe’s paths were, however, later to diverge for a while on that fateful day – 14 November 2017 – when they found themselves crossing swords, or so it appears, in the midst of an unfolding coup.

Although Nguluvhe was merely doing his job professionally to protect Mugabe in an hour of danger, some of Moyo’s foot soldiers thought he was an enemy and attacked him viciously.

Sadly, on the day Moyo and Nguluvhe’s friendship was stretched to the limit. The tensions and hostilities between the army and the CIO did not help matters.

However, Nguluvhe’s former Zipra colleagues in the army quickly came to his rescue after days and nights of vicious brutalisation. But Nguluvhe remained loyal to the system, as they say. Despite having been school mates, trained together and became family friends, they found themselves on a collision course during critical moments as the coup unfolded.

Their communication on the very day of the coup – through calls – failed them. Nguluvhe’s attempt to understand what was happening did not get clarity from Moyo. That led to Nguluvhe being viciously attacked by soldiers at Josiah Tongogara Barracks in Harare to a point of nearly losing his life when he was coming from Mugabe’s Blue Roof home going to his Chaminuka Building offices, CIO headquarters.

An acid test to their comradeship, but they remained friends. It was, however, no longer the same.
Yet in 1976, when Moyo was in Form 2 they sat at the same desk. At the beginning of 1977, Moyo was going to Form 3 when an event that would change his life forever occurred.

On the fateful day, Zipra guerrillas, led by Moses Hawelo Mguni and Mdubane Ndlovu, raided the school. They assembled everyone – some ran away – in a bid to recruit them through capture to join the liberation struggle in Zambia through Botswana.

All teachers, students and nurses, as well as school staff was gathered at assembly and told them that their schooling journey had abruptly come to an — a national call of duty had arrived. They had to stop and put everything aside and begin a long march to freedom via an uncertain future fraught with adversity and danger through valleys and shadows of death.

The young Moyo was taken together with his classmate Nguluvhe, Air Force of Zimbabwe commander Air Marshal Elson Moyo — who was doing Form 4 — former minister Chiratidzo Mabuwa, Mercy Sibanda, the wife of the Commander Zimbabwe Defence Forces General Phillip Valerio Sibanda, and many others.

Coincidentally, Sibanda was to become Moyo’s trainer in Zambia and marry his classmate — Mercy.
Moyo and his classmates were taken with their teachers, including Obert Matshalaga.

The event made international news. Although some pupils and teachers hid at the school, some dropped along the way and others were returned from Botswana, Moyo stuck it out. His father’s attempt to join other parents travelling in government buses to Botswana to bring back their children failed as Zanla guerrillas arrived at the school where he was teaching in Mberengwa, stalling his mission to rescue his child.

But Moyo’s father remained worried and after the war had ended with former guerrillas in the assembly points, he travelled to Bulawayo and all the way to Zipra’s main camp in Gwayi in Matabeleland North to look for his son, but all in vain.

Moyo was at Romeo Assembly Point, far away in the north – in Chinhoyi. The Washington Post at the time reported that nationalist guerrillas had “abducted 400 African pupils from a protestant mission over the weekend and took them to neighboring Botswana for guerrilla training, the Rhodesian military announced tonight”.

The Rhodesian government statement also said that the Zipra raiders “stole $20 000 in school fees and kidnaped five teachers, two nurses and a clerk”. The Rhodesian Foreign Ministry said that 230 male students and 170 females aged between 13 and 19 were kidnaped.

In the Manama Mission incident, a Rhodesian rescue mission failed.

The school’s headmaster, Jeffias Diza (39), was later quoted as saying the incident had began when guerrillas burst into his office demanding school fees for the current term that had been collected that morning.

“There was no violence, but the terrorists were shouting and saying that everybody had to come and join the Zapu army. One of them said he would kill those who didn’t come, but I couldn’t really tell whether the children were going of their free will or not,” he said.

The recruitment was essential to Zapu leader Joshua Nkomo and Zipra to build up his own fighting forces. Botswana had frequently denied that it allowed guerrillas use of its territory as a base for attacks on Rhodesia. But there had been little attempt to conceal the fact that guerrillas recruited through the country.

While Moyo and other students were marching through the bush into Botswana, in Lusaka, Zambia, British envoy Ivor Richard was ending his month-long shuttle tour of southern Africa in a bid to find a settlement to the Rhodesia crisis, Reuters reported then.

This was after the Geneva Conference on black majority rule in Rhodesia.

As Nguluvhe recounted the story, to The Chronicle, the students marched throughout the night until they reached Shashe River in the morning. Rhodesian spotter planes flew over as they tried to stop the mass exodus.

“We managed to cross the river into Botswana and proceeded to Gobajangu until we reached Bubonong,” he said.

“The planes flew over us, but they didn’t bomb us. The Botswana police ferried us using their trucks to Francistown and when we got there, within a day or two, the Rhodesians sent a bus with parents to plead with us to go back home. When the buses came, I think about 50 pupils went back to Rhodesia with one teacher. The rest said we are going to war and within a week we were flown to Lusaka and then taken to a camp called Nampundu.”

Nguluvhe said in Zambia, then the reality of war kicked in during training. Retired Lieutenant-Colonel Collen Ndlovu told The Chronicle Moyo was trained for six months and later became instrumental in establishing Zipra military camps in Zambia.

“We underwent an intensive six months training at CGT Military Camp in Zambia under the tutelage of General Philip Valerio Sibanda. Other instructors who trained us include the likes of the late (national hero) Stanley ‘Gagisa’ Nleya and after training we were selected to be instructors of Zipra cadres,” he said.

“We helped establish several training camps such CGT 1 and 2, Fox Hall, Maheba and Solwezi in the northern part of Zambia where we trained Zipra Cadres.”

The late Eddie Sigoge Mlotshwa was also one of the commanders.

Ndlovu said he and Moyo remained behind in Zambia when others entered the country in 1977 as they continued training other Zipra cadres until 1979. A senior military commander said Moyo and others in training only went to the front with detachments occasionally.

“We trained recruits and deployed them to the battlefields and we produced the cream of Zipra fighters who operated in Chinhoyi, Gokwe, Hurungwe. Other instructors that we worked with included the likes of late Lieutenant-Colonel Abednico Shoko, Lieutenant-Colonel Leonard Gwanzura and others,” he said.

Ndlovu said after ceasefire he met Moyo at the Romeo Assembly Point in Chinhoyi. From there, they were taken to Gweru for integration into the national army. Rhodesian officers tried to frustrate them, but Moyo led a fight with the likes of Retired Lieutenant-General Douglas Brigadier Nyikayaramba, Colonel Gutu and Major Mpofu, among others. They were later integrated with over 500 others.
Moyo was integrated as a captain and Lieutenant-Colonel Happyton Bonyongwe became colonel and was appointed the commanding officer of their unit 2.2 Battalion.

From there it was one way up for Moyo who went on to command 6 Brigade and fight in Mozambique and the Democratic Republic of Congo.

In between, he went on peace-keeping missions in Angola and Somalia. But after the coup, he became Foreign minister until his death two days ago – marking the end of a remarkable and dramatic life story.