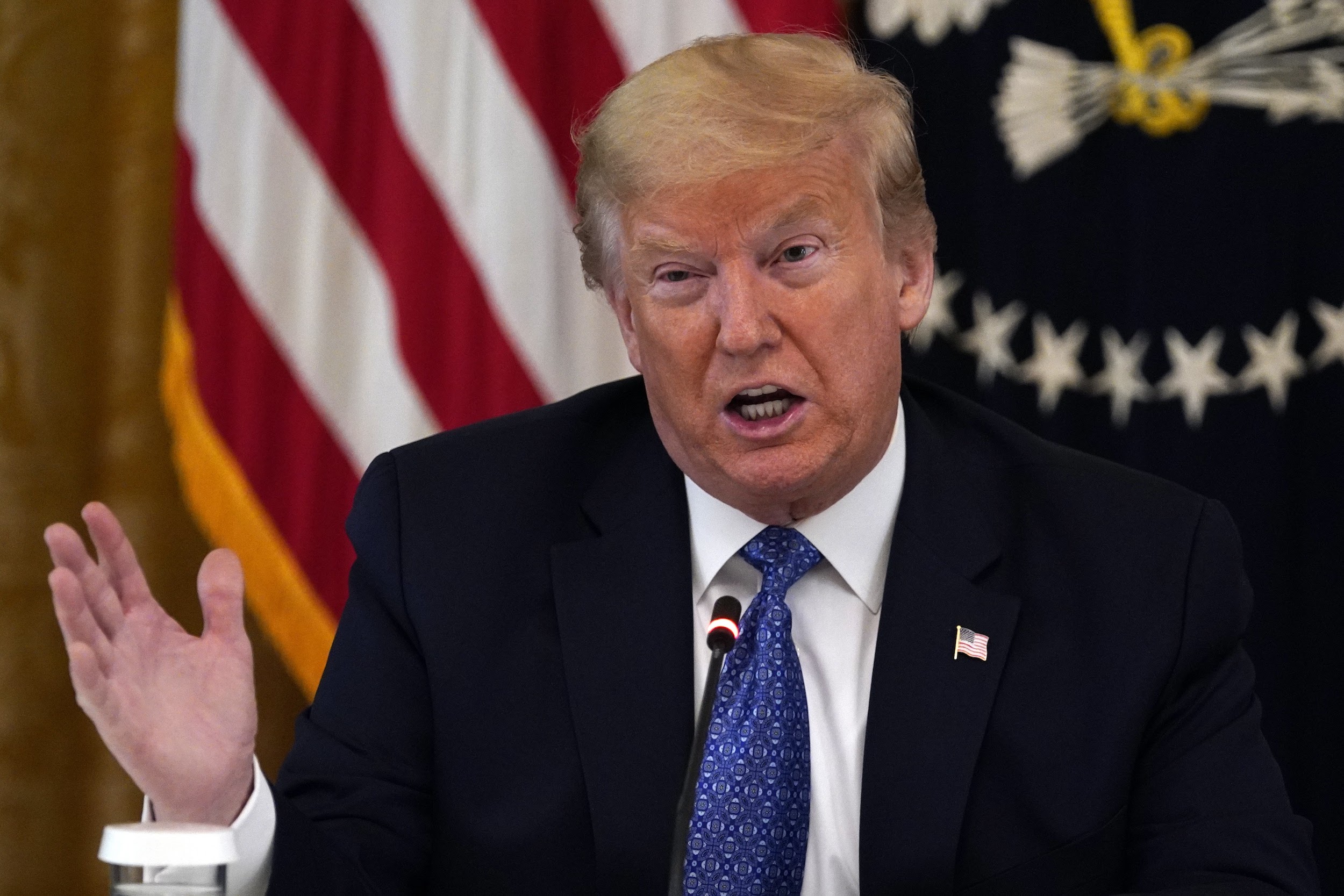 President Donald Trump speaks during a Cabinet Meeting in the East Room of the White House, Tuesday, May 19, 2020, in Washington. (AP Photo/Evan Vucci)

AS the world is transfixed with the intrigue and civil war engulfing American politics, the repercussions of the Trump administration’s wilful surrender of its global leadership role will linger beyond its short-lived tenure.

From the onset in January 2017, the Trump administration gained infamy for its full-frontal attacks on facts. The embrace of fact-free narratives in the Trump era was epitomised by the audacious whopper by then White House press secretary Sean Spicer that his boss’ inauguration had “the largest audience ever … both in person and around the globe”.

Overwhelming evidence to the contrary did not deter Donald Trump’s mandarins from spewing fib after fib, which Trump’s senior adviser, Kellyanne Conway, described as “alternative facts”.

Trump’s legacy of an adversarial approach towards the media that were not deferential to him and labelling such as “fake news” has exacerbated the dire plight of journalists around the world, who are at the mercy of emboldened autocrats.

This is not to say the pre-Trump United States was a paragon of virtue or to lump all the country’s shortcomings on the 45th president.

Evidently, the caustic racial and class divisions as well as glaring hypocrisies with regards to respect for human rights were there before Trump and will outlive him.

Even if the vision of America as a “shining city on a hill” and an example to the rest of the world has always been sullied by racial injustices and rampant imperialism, there can be no denying that the ideals of the nation’s founding fathers — such as freedom of the press as stated in the US constitution’s First Amendment — have served as a guidepost around the world.

That is why the norm-breaking Trump administration has had an insidious effect on press freedom in the United States in particular and the world in general.

From banning journalists at White House press briefings to Trump praising a congressman for beating up a journalist, the past four years marked a new low.

Last year, the Trump administration was accused of installing a new chief at the country’s international broadcaster Voice of America (VOA) with the goal of turning it into a fully-ledged propaganda outlet for the government.

The Trump White House has publicly criticised VOA for not trumpeting the administration’s line and for its coverage of Covid-19 in China.

Just this past week, outgoing secretary of State, Mike Pompeo, accused VOA of “demeaning America” and he urged the broadcaster to tell how the United States “is the greatest nation in the history of the world and the greatest nation that civilisation has ever known.”

As if to illustrate how servile he was to Pompeo, VOA director Robert Reilly ordered the reassignment of reporter Patsy Widakuswara after she sought to ask questions of the outgoing secretary of State this week, as reported by the Washington Post.

Pompeo, who had ironically spoken about “American exceptionalism” and criticised oppressive regimes in China, Iran and elsewhere during his speech, ignored Widakuswara’s questions about his initial refusal to acknowledge Joe Biden’s triumph over Trump in the 3 November presidential election.

Pompeo had asserted on 10 November , 2020 that there would be a “second Trump administration” despite Biden’s election victory, although he has since acknowledged defeat.

According to Reuters, some VOA staff members had opposed Pompeo’s speech, through a whistle-blower complaint, saying it amounted to propaganda for the outgoing administration if there were no reporter questions.

Coupled with the storming of the US Capitol by Trump loyalists last week, this descent into authoritarianism has strengthened the hands of demagogues around the world.

It is no wonder that American diplomats recently drafted two cables condemning Trump’s incitement of the deadly assault on the Capitol. The career foreign and civil service officers expressed concern that the deadly siege would undermine US credibility to promote and defend democratic values abroad.

And undermine American clout it certainly has.

Russia and China took the opportunity to assert the primacy of their authoritarian governance systems and to underscore the weakness in Western democracy.

Chinese media and commentators likened the siege to the pro-democracy Hong Kong riots, which Western countries have backed in principle.

Autocrats like Zimbabwe’s Emmerson Mnangagwa have been rubbing their hands gleefully at the impunity from censure the chaos in Washington affords them.

Mnangagwa could not contain his delight, saying on his Twitter handle the insurrection disqualifies Washington from lecturing other countries on democracy.

It has emboldened the regime to terrorise and arrest dissenters knowing that while the cat is occupied with domestic turmoil, the mice will play.

Strident government critics like journalist Hopewell Chin’ono along with opposition officials Job Sikhala, Jacob Mafume and Fadzai Mahere have been in and out of prison on farcical charges essentially meant to wear them down and silence dissenting voices.

Continental and regional bodies like the African Union and Sadc have largely watched idly as democratic gains have been eroded with strongmen like Mnangagwa, Uganda’s Yoweri Museveni and Tanzania’s John Magufuli riding roughshod over any squeak of opposition to their tyrannical rule.

Sadly, opposition activists and journalists have had to rely on American and other Western embassies for robust condemnation of rights abuses as the “African solutions for African problems” mantra has largely fallen flat.

In an ideal world, Africans should have put in place institutions to put a check on governance infractions in the continent but on current form we are actually regressing on that front.

Coups are back in vogue and sham elections are the order of the day from Cape to Cairo, while constitutions are being amended to extend presidential terms.

Even if they have laced their pro-democracy initiatives with a neo-imperial agenda, the intervention of the United States and other Western countries has served as a check on wanton human rights abuses.

Left to their devices, the Mnangagwas of this world will take their cue from countries like Russia where opposition leaders are poisoned or shot dead with impunity.