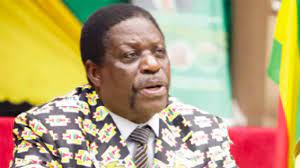 PRESIDENT Emmerson Mnangagwa is under fire from senior Zanu PF officials, including those stationed at party headquarters, who have raised concern over the failure by ruling party officials deployed in government to deliver and steer the troubled economy, which could backfire in the 2023 national elections.

Zanu PF insiders told The NewsHawks that the party bigwigs feel the issues raised last week by party supporters in Harare on ministers’ failure to address the economic crisis and attend to the plight of the impoverished masses deserve urgent attention.

It has emerged that the concerns raised have jolted the party leadership into action amid calls for Mnangagwa to take decisive action.

Those who are not delivering must shape up or ship out to give confidence to the economy and ultimately ensure party victory.

Zanu PF national political commissar Mike Bimha (pictured) conceded recently that the issues raised by party supporters needed a “bigger platform to address”, adding that he will brief his superiors over the myriad concerns raised.

A senior party official who spoke to The NewsHawks in off-the-record interviews said the issues raised were correct sentiments of party supporters, hence the need for the urgent addressing of the “genuine concerns”.

Asked what the party would recommend on non-performing deployees to the government in the wake of party members’ misgivings, Zanu PF national secretary for administration Obert Mpofu said deployment of party cadres to the government and other responsibilities was the prerogative of the President.

“Who deploys those to government?” Mpofu asked rhetorically.

“The party has a leader who is the President and he can be the best person to comment on that,” he added.

Mnangagwa is under pressure to act and reshuffle his failing cabinet and while those within the party are afraid to openly speak on the subject, Zanu PF sympathisers outside the party, including vocal Norton independent member of Parliament Temba Mliswa, have openly called for action to rescue the country’s dying economy.

“We can no longer hide the fact that he (Mnangagwa) is the number one citizen. We can’t hide that he is responsible for decisions in cabinet. We have to call a spade a spade,” the outspoken lawmaker said.

“Who appoints the ministers, who presides over government?”

Mnangagwa, upon coming in as President following a military coup in 2017 that led to the fall of the late former president Robert Mugabe, assigned influential party bigwigs, including ex-ministers, to Zanu PF headquarters, while appointing to his cabinet five from outside the party.

Chinamasa, now lauded by some Zanu PF members for his stewardship of the economy in bygone days as Finance minister, was relegated to party headquarters on a full-time basis as secretary for finance.

The Zanu PF politburo member, who had lost the post to Ignatius Chombo before the 2017 coup, was replaced by Mthuli Ncube, a Cambridge-trained professor of economics who is under fire from within and outside the party for failing to address the economic crisis.

Mnangagwa’s allies this week also raised concern over the alleged poor show by the Health ministry under Vice-President Constantino Chiwenga that has seen nurses and doctors being impoverished in the years the “new dispensation” has been in power.

Health professionals are currently on strike over poor salaries and working conditions while thousands are leaving the country to seek greener pastures.

Chiwenga is said to have bulldozed his way into the ministry following the expulsion of Obadiah Moyo over corruption allegations involving millions of dollars over the Covid-19 funds abuse.

Observers said almost all of Mnangagwa’s appointments outside party structures have failed to perform amid suspicion most of them were not alive to party policies and the manifesto presented ahead of the 2018 general election.

Last week, Zanu PF supporters in Harare openly pointed out during a function on economic development and indigenisation that Zanu PF risked losing the 2023 elections because of the non-performance of party deployees in government.

Ncube was fingered as a monumental failure by the supporters who said he has shepherded the economy in the wrong direction despite countless assurances that his austerity measures will see the economy rising again.

July Moyo has been implicated in several cases of alleged corruption involving millions of United States dollars, including the suspicious Pomona waste-to-energy deal that has been frowned upon by residents and the opposition.

Coventry, a high-flying athlete in her heyday, came into the Sports, Arts and Culture ministry where she has been criticised for neglecting her constituency and too docile for the portfolio, with Zanu PF insiders saying the ministry was only fit for an energetic person who would inspire the people and promote projects to rally support for the party.

Related Topics:EconomyZanu PF
Up Next