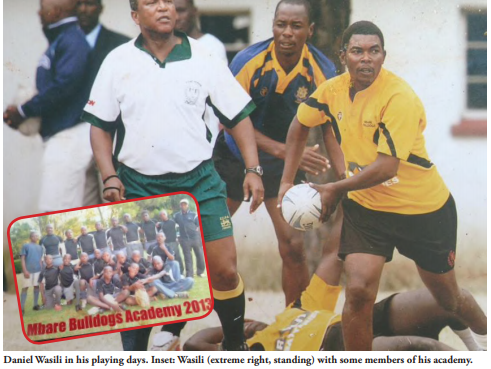 IF you have bought refreshments and snacks on the street around the arc of Highfield Road in the Southerton industrial area of Harare, you probably contributed indirectly to one of the most selfless efforts towards upliftment of sport in Zimbabwe.
ENOCK MUCHINJO
Daniel Wasili—a stocky and friendly 42-year-old sitting on an old wooden stool behind the mobile vending cart—sells an assortment of foodstuffs to factory workers and several passers-by in the area.
The Southerton terrain is one Wasili, known to many as JB, is familiar with. He was born and raised in nearby Mbare, where he learnt how to eke out a living peddling from street stalls.
These days, proceeds from Wasili’s small enterprise mainly go towards the upkeep of his two young daughters, with who he has developed an even closer relationship following the sad passing of their mother last year.
A significant chunk of his modest earnings also goes towards an abiding dedication to community service through a sport he loves so dearly: rugby.
Unassuming and sociable, most people who come through to Wasili’s mobile vending store will not know that their favourite meal supplier was in fact a one-time Zimbabwean top-flight league rugby player who—from his sweat on the streets—has gone on to groom future international stars more decorated than he was.
Wasili got his first taste of rugby in the 1980s through township development programmes sponsored by such thriving companies as Quench, David Whitehead Textiles and Colcom Zimbabwe.
The initiative resulted in quite a number of talented black players emerging from the high-density areas—chiefly Mbare, Mufakose, Mabvuku and Chitungwiza—with some developing fast enough to play international rugby for Zimbabwe.
A great deal of that effort those days came from British coach Collin Osborne, Zimbabwe’s director of rugby and later national coach in the 1980s and early ’90s.
“He (Osborne) encouraged us to remain in the system despite the frustration we faced, and the slow pace of racial integration in rugby back then,” says Wasili.
The Zimbabwe Rugby Union-initiated grassroots projects gave birth to lower league clubs in the townships in the ’80s, and Wasili, a scrumhalf, turned out those days for a gutsy Mbare Bulldogs outfit that turned heads with its range of skills and natural ability.
With time, some of the township’s finest talents began to attract the attention of the established clubs on the more affluent side of town. Wasili ended up at Harare Sports Club, where one of his biggest influence was Zimbabwe’s first black captain and World Rugby Hall of Fame inductee Kennedy Tsimba.
“Ken Tsimba came from a more privileged background, but he was passionate about grassroots development,” Wasili says. “It was a privilege just being in the same dressing room with him. When we played 15s, he would always encourage us to go back to the ghetto, to our roots, to help develop raw talent there.”
Outside club rugby, a highlight of Wasili was playing for a Zimbabwe second-string Sevens team, Goshawks, in 2004 and 2005.
His playing career never really took off, turning to coaching at a young age. He was one of the founders of Mbare Academy, which has gone on to produce household names in Zimbabwean rugby through monetary assistance and coaching.
The most notable products of Mbare Academy are livewire back Manasah Sita—who two years ago switched international allegiance from Zimbabwe to Germany—and experienced Zimbabwe loose forward Njabulo Ndlovu.
Some 15 years ago, Wasili moved to Hatcliffe, where he bought land and built a house. Before Wasili’s arrival, Hatcliffe was alien to rugby. It is now the second most popular sport in the crowded high-density suburb, thanks to Wasili’s passion for the sport, which saw him setting up teams for both boys and girls.
Wasili’s efforts are often at great personal sacrifice, but with no hint of regret.
“Rugby is my life,” he says. “I love to identify and develop talent, seeing it progress to levels that I was never able to reach myself. I have passion for transforming lives through rugby.”
The Wasili girls, Kudzai (16) and 12-year-old Ashley, are chips off the old block. The two sisters play rugby, and are both scrumhalves, just like their father.
The two schoolgirls however split the family at club level. Ashley turns out for Harare Sports Club while her young sister plays for rivals Old Georgians.
“When I go watch them play, I will be supporting rugby, not teams,” chuckles the proud dad. About 10 years ago Wasili returned to his roots, Mbare, where he feels he has unfinished business.
The Mbare Bulldogs Academy is now in top gear, with hundreds of both boys and girls coming through to receive training every week.
“Mbare is a centrepiece of black rugby development in Zimbabwe,” Wasili says. “There is history in that place, and the parents are so supportive of our efforts.”
At Mbare Bulldogs, Wasili is ably assisted by former Kyle College and Alexandra Sports Club scrumhalf Chris Tavonesa, himself an enthusiastic development coach with an eye for talent.
“Our vision is to create world-class rugby players from these areas,” says Tavonesa. “Zimbabwe can be a world-beater in this sport. If our neighbours South Africa can do it in rugby, and Zambia won the Africa Cup of Nations in football, we can also do it. There is unbelievable talent in our country.”
In the true spirit of helping others achieve their dreams, training is offered for free at Mbare Bulldogs Academy to interested budding rugby players.
And from the little resources earned from hard work and effort, Wasili and his partners continue to forge ahead in pursuit of better livelihoods for the youngsters of the townships.
Related Topics:Daniel WasiliRugbyZimbabwe
Up Next

A team battling to shake off unwanted reputation