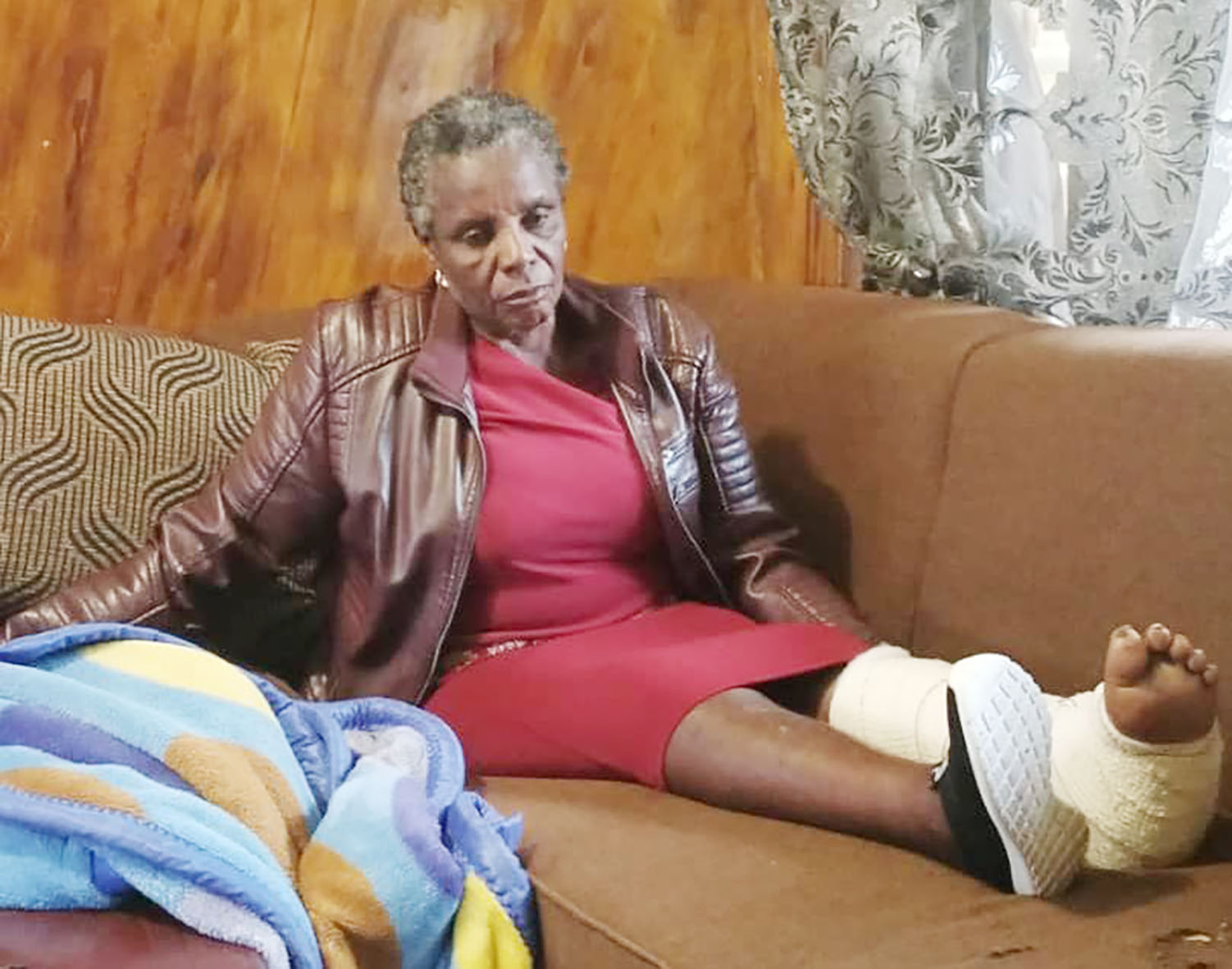 LAIZA Chikonye (pictured), a resident of Harare’s Glen View 8 high-density suburb, cuts a lonely figure as she lies still in the corner of her couch.

The 69 year old woman shrieks and groans as she struggles to sit, while at the same time avoiding bending her legs – one of which is heavily bandaged.

Wrinkles form waves on her face as she winces in pain while attempting to move her right leg. It takes more than three minutes for her to achieve the feat.

“I have to use just one blanket,” she says. “If I use more, the weight will cause unbearable pain on the legs.”

Chikonye was hit and run over by a commuter omnibus whose driver was fleeing police officers while trying to avoid a hand spike thrown by one of the officers, reads a medical affidavit signed by Dr Deric Chintembo, an orthopaedic and trauma surgeon. The accident occurred on 9 May at Market Square Bus terminus in central Harare.

She is lucky to be alive.

Doctors who attended to her say there is a possibility of permanent injury due to the nature of injury and her old age.

Although the police announced a ban on the use of spikes four days after the incident, damage has already been inflicted on Laiza’s life, and it could be permanent.

After she underwent surgery at Mbuya Dorcas Hospital in Waterfalls, her right leg is now fitted with screws and metal plates due to fractures she sustained from the accident. Part of her left leg has a big discoloured scar full of clotted blood. Drying burns, once swollen, dot the surface of her leg.

The injuries she sustained during the accident have now confined her to her home.

Chikonye recounts the day misfortune befell her – when an accelerating commuter omnibus hit her and ran over both of her legs.

“I was hit on the side and I fell on my right arm. After that, both of my legs were run over by the vehicle,” she says.

“I never imagined that for a day I would end up like this. “My life is no longer the same as I am being helped with almost everything. I am now afraid of my future,” she says as she holds back her tears.

Chikonye has foregone some of her former passions which include gardening.

A pensioner who left Parirenyatwa in 2018 having worked there since 1979, gardening was her major pastime.

Before the accident, Chikonye was already using crutches to support her left leg which was becoming weaker due to old age.

“Now there is no possibility of me using crutches,” she says. “I was using them to support my other leg which was already weak before the accident. A wheelchair will be better since I cannot go anywhere.”

Her husband, Godfrey Chikonye, is now a major caregiver to Laiza. Problems spalling from the accident are taking a toll on the family’s income.

He has been forced to forego any luxury or leisure and sometimes must put work on hold so he can watch over his wife. This has had an effect on the family’s upkeep.

“Since the accident, I have never left my wife’s side,” says Godfrey. “I am now lending her all attention as she has been immobilised by the accident.

“I carry her wherever she wants to go. When she is going to the hospital, we also lift her with her chair into the car.”

Prior to the accident, Godfrey, who works as a welder, would do errands for neighbours in Glen View 8 to support his family, but times have changed.

It is becoming increasingly difficult for the family to raise money for food and other basic commodities.

Hospital bills are also ballooning. On the day of the accident, Mbuya Dorcas Hospital quoted US$3 200 in admission expenses.

“I work there (Mbuya Dorcas), but it is hard to negotiate for us to be treated for free,” said Chiedza Chikonye, the daughter. A well-wisher had to foot part of the hospital bill.

In a week, additional medical costs amounted to US$1 140.17. “We are cracking our heads right now and do not even know where we shall get a further US$80 for review.

“We paid US$80 today, and next week we are anticipating where the other amount will come from,” Chikonye says. “The doctor says it will take at least three months for me to recover. I also have to go for review every week paying an US$80 fee.”

It is a hard and trying time for Chikonye and the family is feeling the pinch. Winter has come and, during this time, wounds have a tendency of becoming more painful.

Healthcare is now out of the reach of the average Zimbabwean as families are struggling to put food on the table.

The cost of living is maintaining an upward trend, shooting up 17.9% between February and March 2022, according to the Consumer Council of Zimbabwe (CCZ).

The economic hardships can only worsen, considering the soaring inflation which has seen Zimbabwe’s local currency on a freefall.

The Passengers’ Association of Zimbabwe (PAZ) says there is a need to make use of technology to promote surveillance at various termini while ensuring the safety of passengers and pedestrians.

“Some countries use closed-circuit television (CCTV). There should also be rank superintendents who are in charge of rank affairs. This will promote orderliness.

While the commissioner-general of police initiated a ban on the use of hand-held spikes for deflating tyres, a constitutional lawyer, Advocate Fadzai Mahere, says there is a need for a full ban on all spikes and other weapons of force used by the police.

Mahere, who is also the Citizens’ Coalition for Change spokesperson, said: “While we welcome the ban on spikes, we call for a complete overhaul of policing methods to bring us in line with the constitution.”

In early April, four people died while eight others were seriously injured after a police officer threw a spike at a moving commuter omnibus in Mutare.

Police say some motorists have been deliberately flouting traffic regulations, getting involved in accidents and claiming police had thrown spikes at them.

Meanwhile, damage has already been inflicted on several other victims with others losing their lives.

For Chikonye, the outdated policing method has left a permanent mark on her life.

“I may or may not walk again, but I am now afraid whenever I see a moving vehicle. I do not want the same to happen to anyone again,” says Chikonye.