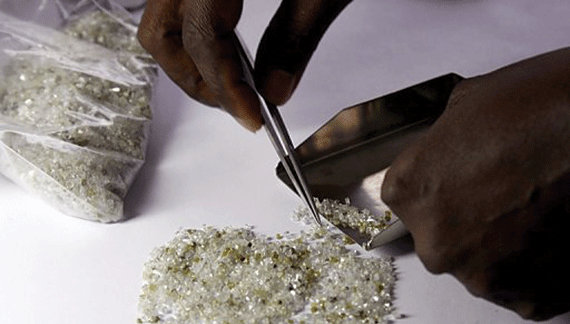 THE paradox of plenty or the resource curse is how some critics have described the correlation between Zimbabwe’s vast mineral endowment and the country’s economic misfortunes.

Officials say Zimbabwe has over 40 base minerals and several precious stones such as diamonds, yet it still remains an oxymoron that why would a nation with one of the largest known diamond and platinum deposits in the world have nearly half of its population living in extreme poverty.

In their top-selling book titled Why Nations Fail, Daron Acemoglu and James Robinson conclusively show that it is man-made political and economic institutions that underlie economic success (or lack of it). They argue that Botswana under Ian Khama succeeded at building institutions that could enhance prosperity. Mobutu Sese Seko’s Congo and Robert Mugabe’s Zimbabwe did not even try.

Critics say Zimbabwe’s economic situation has been epitomised by grand looting, bad policy and institutional malaise, factors which are well documented. Authorities on the other hand blame the country’s colonial history, the invisible hand and sanctions imposed by the West at the turn of the millennium for this outturn.

The diamond rush after the mass discovery of the precious stones in Marange, the human rights abuses, looting and lack of accountability have brought wealth to a few and despair to many. This all began when Marange was discovered to have one of the world’s richest diamond deposits in a century. In June 2006 and over the next two years, 30 000 small-scale miners flocked to the area.

The diamond rush led to water, sanitation, and housing crisis, as well as a rise in illicit financial flows, smuggling and violence as politically influential figures allegedly took control of the illegal extraction.

Before long, the government unleashed a bloody crackdown code-named Operation Hakudzokwi (“No Return”). Security forces were reportedly ordered to shoot miners on sight. Reports show that 200 were killed during this operation, triggering international condemnation and later the relocation of locals, who are yet to get back on their feet.

This is unlike neighbouring Botswana which transformed from being nothing more than a vast desert landscape to one of Africa’s fastest-growing economies on account of diamond deposits.   Botswana’s diamond mines account for a third of its gross domestic product.

Just more than half a century on,  Botswana has turned into one of Africa’s fastest-growing economies. Its capital, Gaborone, is a thriving city of just under a quarter of a million people with skyscrapers sprouting up in every corner.

Several voluminous reports on Zimbabwe’s diamond industry compiled by pressure groups, experts and parliamentary committees over the years have gathered dust before some key recommendations on bringing transparency and accountability on the seemingly opaque sector are taken on board.

Just this week, a new parliamentary report revealed that Zimbabwe’s largest airport has no security scanners to detect smuggled diamonds amid concerns that the country could losing precious minerals worth millions of dollars through smuggling across porous border posts.

Mining is Zimbabwe’s largest earner of foreign exchange, accounting for more 50% of export earnings. Officials show that there are four diamond mining companies in Zimbabwe, namely Alrosa (Private) Limited, Zimbabwe Consolidated Diamond Company (ZCDC), RZM Murowa (Private) Limited and Anjin Investments (Private) Limited. Alrosa, according to the report, has not yet begun production and is still in the exploration stage. Conversely, ZCDC and Murowa diamonds are actively involved in the mining of diamonds.

According to the latest parliamentary report, urgent steps are needed to plug the revenue leakages as well as improve transparency in the extractive industry. A few years ago round diamonds worth an estimated US$140 million disappeared from the Minerals Marketing Corporation of Zimbabwe (MMCZ) and ZCDC repositories. The diamonds weighed 350 000 carats.

Previous auctions revealed that Zimbabwean diamonds normally fetch about US$400 per carat, although this can rise to as much as US$12 000 per carat.

“One of the major loopholes in legal and policy framework is the non-recognition of artisanal and small-scale miners who are largely fuelling the smuggling of diamonds to other countries, particularly through Mozambique,” reads the report of the Portfolio Committee on Mines and Mining Development.

“Furthermore, it was noted that the Diamond Policy is not widely known by the public and it was therefore, imperative for the ministry of Mines and Mining Development to disseminate the policy.

“At Forbes Border Post, ZIMRA [Zimbabwe Revenue Authority] officials were trained on the KPCS [Kimberly Process Certification Scheme] requirements but the other agencies such as Immigration Department had not gone through the same. Secondly, border officials highlighted that they were not trained to identify the features of a diamond. To address this gap, MMCZ indicated that it intends to post some of its officials at the border posts.

“There were no scanners to detect diamonds and other precious minerals at both Forbes Border Post and Robert Gabriel Mugabe International Airport. The committee was informed by the Airport Authority that there were plans to purchase the appropriate scanners in the year 2022.”

The report also shows that while security personnel at the ports of entry had not reported any incidences of smuggling, officials at Forbes Border Post were not aware of the features of an export certificate used in the trading of diamonds.

“The customs officials requested MMCZ to supply them with a copy, so that officials would not be caught off-guard in the event that diamonds are exported or imported through that border,” the report further reads.

This initiative emanated from a resolution that was made by the committee on 26 July 2021 to appoint a sub-committee with the sole mandate of conducting an inquiry into the diamond sector, in particular to assess its level of compliance with the KPCS. To this end, the sub-committee was empowered to spearhead engagements with the ministry of Mines and Mining Development, CSOs and other stakeholders.

The committee also issued the Mines ministry an ultimatum to overhaul mining laws in the country.

“The ministry of Mines and Mining Development should review the diamond policy and submit a Bill amending the Precious Stones Trade Act by 31 August 2022, particularly to integrate artisanal and small-scale miners in order to curb the illegal smuggling of diamonds in areas such as Marange. Alternatively, stiffer penalties can be introduced to curb diamond leakages,” the report reads.

The diamond sector in Zimbabwe is regulated by the Mines and Minerals Act [Chapter 21:05], the Precious Stones Trade Act [Chapter 21:06], the Minerals Marketing Corporation of Zimbabwe Act [Chapter 21:04] and diamond policy of 2019. While the Mines and Minerals Act regulates the issuance of licences for special grants to mine diamonds in Zimbabwe, the MMCZ Act and Precious Stones Trade Act regulate the export, sale, stockpiling, possession and dealing in diamonds. The diamond policy of 2019 outlines the investment opportunities and requirements to be observed by diamonds producers who operate in the country.