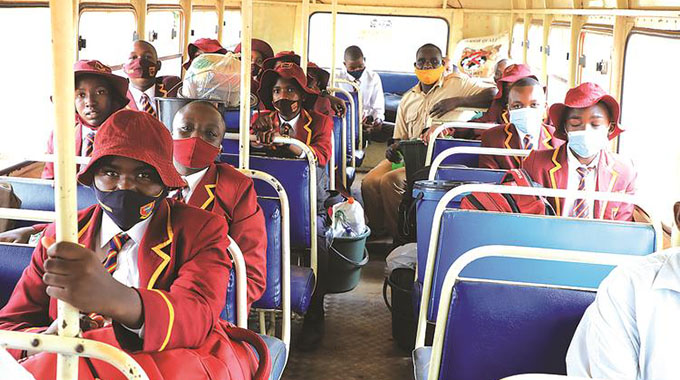 IT is 7am and inside a poorly lit room close to Matapi Flats in Harare’s Mbare suburb Shyleen Moyo and her two colleagues have already commenced work in the Shawasha textile area as they wait for clients.

Sewing machines are whirring and clanking while the hissing of hot industrial irons can be heard from the door.

Their legs are doing most of the work, stomping furiously on the foot pedals.

Moyo’s colleagues, a teenage boy and another middle-aged lady complete her staff, working in the tiny room.

Hordes of school uniform material are piled by the side. More orders for uniforms will come in the following days.

Moyo and her team are part of dozens of small-scale uniform manufacturers within the area spending long hours toiling in preparation for the opening of the second school term.

“It is just the three of us,” she says. “This makes it difficult to cater to bigger orders. On a normal day, we produce between 20 and 25 uniforms. Now we have had to increase the number from that number to between 30 and 35 per day,” Moyo says.

Many clients flock to Mbare for cheap uniforms and stationery, among other goods.

Even street vendors flock to the small-scale manufacturers like her, buying goods for resale.

“I make hats and uniforms for both sexes which are cheaper than those in established shops in town. A full set uniforms costs US$4, for both boys and girls,” she says.

In town, established shops which retail school uniforms are selling shirts for US$8 and the same amount for trousers.

The cheap uniforms sewn by Moyo and other backyard tailors have attracted lots of buyers hunting for a bargain in these tough times.

In the space behind Rufaro Stadium in Mbare, makeshift vending stalls have been set up where traders sell school uniforms.

For Mavis Karonga, a mother of three, school opening has come too soon.

Her youngest child is wrapped in a shawl and strapped on her back whilst the other two, aged nine and eleven years old, keep by her side. She has brought them with her to try on the new uniforms.

“I can never stop buying school uniforms as the cycle is always ongoing It is either the shirt gets smaller, or it gets torn in a tug,” she says.

“The expenses come back to me. Worse still, I need new pairs of winter uniforms for both.”

For both, she has to fork out US$14 and US$20 for shoes. Prices have been shooting up as the Zimbabwe dollar spirals on a freefall.

“Everything has just become so difficult,” she says. For government workers, particularly teachers, the going has been tough.

Whilst teachers get an average monthly salary of ZW$19 850, the money is easily dwarfed by commodities needed in the back-to-school rush.

A teacher with three children would need ZW$22 797 to buy shoes from a Bata Company outlet in Harare. Inflation has not been merciful in mauling their earnings.

Bata is selling shoes at ZW$7 599 and ZW$6 999 for secondary and primary school students respectively, which translates to US$47.69 and US$43.92 using the official Reserve Bank of Zimbabwe rate.

(CPI) is a measure of the average change over time in the prices paid by urban consumers for a market basket of consumer goods and services.

Recently, urban consumers have had to pay more for goods and services, making it difficult for them to access basic commodities.

According to the Amalgamated Rural Teachers’ Union of Zimbabwe (Artuz), the opening of schools should have been delayed.

“Most teachers are occupied by the census and there was a need to have a week for work planning after the census so that they prepare. Also, the issue of incapacitation is still real, considering the recent increase in prices of basic commodities,” says Rob Chere, secretary-general of Artuz.

He said there is a need for safety monitoring in schools before the second term begins, to curb the spread of Covid-19.

Another issue is that the government has not yet fulfilled its promise to pay the fees of teachers’ children. Chere says efforts to engage the government on the matter have continually hit a brick wall.

“We have written to the ministry of Finance several times asking for fees payment and Minister Mthuli Ncube responded citing that they are looking into the issue. Monday 25 April we wrote further communication asking for a meeting on the payment modalities since schools are about to open, and we are still looking forward to the meeting,” Chere says.