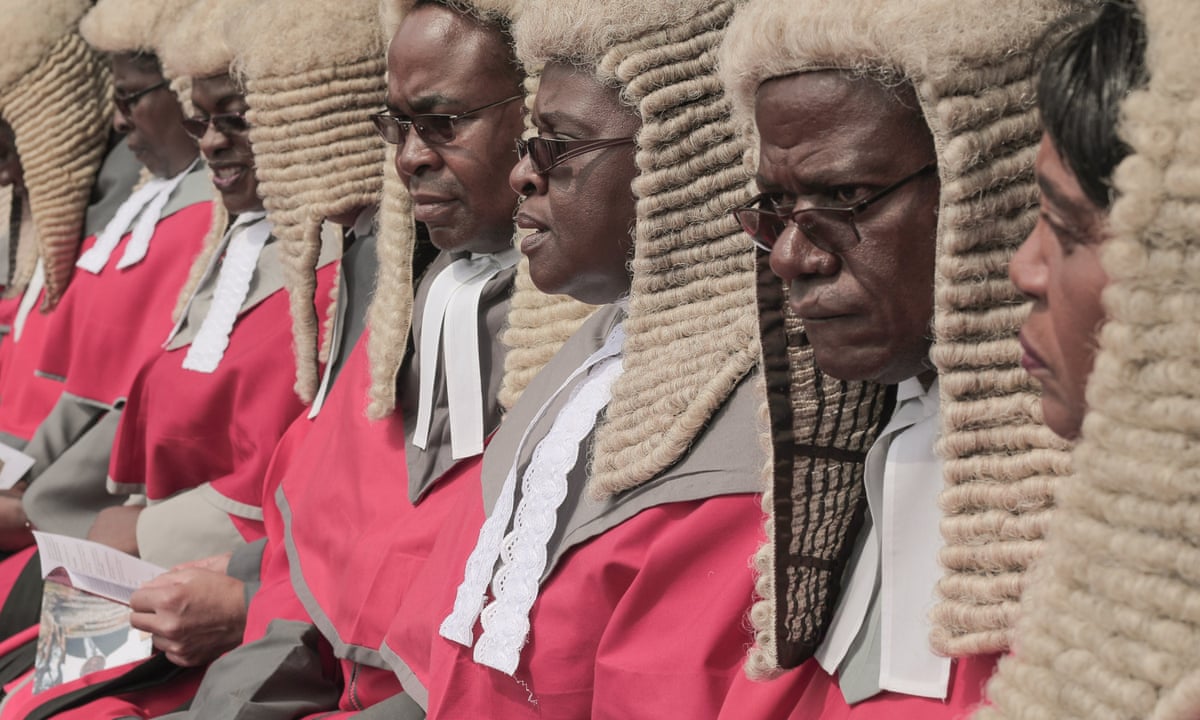 SIMBARASHE TEMBO
ZIMBABWE’S modern judiciary has come a long way since the 1890s, with many highs and lows, but perhaps the lowest point of the post-independence judiciary was in the early 2000s period when the bench was decimated and packed at the height of the fast-track land redistribution programme.
That may now have been overtaken by the current new low. More troubling is that this new low has been reached in what is supposed to be a new constitutional and political dispensation post-2017.
Like the early 2000s, the judiciary of 2021 has hogged the limelight, locally, regionally and internationally for all the wrong reasons.
Various rule-of-law institutions regionally and globally have raised their eyebrows following what is happening Zimbabwe.
But it looks set for worse, come 14 July 2021, when a conflicted Constitutional Court bench will sit for a ruling that may be the lowest point of the Zimbabwean apex court, and the judiciary as a whole since Independence.

Judges in own matter

On 14 July 2021, a conflicted bench of the Constitutional Court will sit to determine a matter in which the judges are interested parties.
The case was crafted to undo the 15 May 2021 judgment in which Justice Edith Mushore, Justice Happias Zhou and Justice Jesta Helena Charewa ruled in favour of Zimbabwe Human Rights NGO Forum executive director Musa Kika, and the Young Lawyers Association of Zimbabwe (YLAZ) that Luke Malaba ceased to be the Chief Justice on 15 May 2021 when he turned 70.
Malaba is, however, still at work despite the judgement after his appeal which triggered controversy on whether it suspended the judgement or not.
A recent application by one Max Mupungu, represented by Lovemore Madhuku, a professor of law, cited all the parties to the 15 May 2021 matter, but conveniently omitted to cite the judges of the Supreme and Constitutional Court who were parties in the Kika and YLAZ matter which he now seeks to nullify.
Those judges who were conveniently not cited are now sitting to likely reverse the decision of the High Court which affects them.
In a case management meeting last month over the matter presided over by Deputy Chief Justice Elizabeth Gwaunza, Kika’s and YLAZ’s lawyers unsuccessfully sought Gwaunza’s recusal from the matter.
While the parties cited by Mupungu may be none of the judges who were party to the 15 May 2021 matter, the reality is that the judges of the Constitutional Court are themselves on trial on 14 July; their integrity, fidelity to the rule of law; and their recognition and respect of the fundamentals of natural justice, or lack thereof, are on display.

It would be folly of anyone to believe that the court will sit on 14 July 2021 and make a ruling thereafter, and the integrity of the court would remain unscathed, with such monumental moral and legal failures in recognising the conflict of interest that is patently obvious even to the layman.

At the core of this saga is self-interest, motivated by power retention. In 2011, when the then South African president Jacob Zuma extended the tenure of former chief justice Sandile Ngcobo, the move sparked a Constitutional Court challenge by civil society organisations — the Justice Alliance of South Africa, Freedom Under Law, the Centre for Applied Legal Studies and the Council for the Advancement of the South African Constitution.
Immediately, Ngcobo tendered his resignation, recognising that preservation of the integrity of the judiciary was key over furthering his own personal and selfish interests.
According to then Justice minister Jeff Radebe, “Chief Justice Ngcobo said he found it undesirable for a chief justice to be party in litigation involving the question of whether or not he should continue to hold office as this detracts from the integrity of the office of the chief justice and the esteem in which it is held”.
What is obtaining in Zimbabwe is the opposite. Malaba is dragging down with him the entire judiciary and its integrity in pursuit of self-preservation, with all manner of law and legal convention being broken in seeking to undo the ruling of 15 May 2021.
Whatever may be the reason for Malaba’s continued clinging onto office, one would have expected him to resign in the face of this controversy, that is act with integrity, as Ngcobo did.
The reality is opposite. Malaba himself has actively engineered processes that have led to the illegal extension of his tenure.
Amendments No.1 and No.2 to the constitution of Zimbabwe, 2013, were carefully engineered to allow for the continued stay in office of Malaba beyond 15 May.
Even though the Constitutional Court, in which Malaba sat and made ruling, had found that Amendment No.1 was passed unprocedurally for failing to meet the two-thirds majority votes threshold in the Senate, the court gave a window for the Senate to correct that, leading to present controversies of an Amendment Act deemed to be revived against all manner of legal convention in the law-making process. But this would benefit Malaba soon after, as we were to see in May 2021.
What makes this scheme so patently contrived is that May 2021 arrived, with Malaba having by then failed to trigger the process of facilitating for a successor, which ought to have been started at least months before then as the late former Chief Justice Godfrey Chidyausiku did.
It would appear there was confidence in both the appointing authority and Malaba in the efficacy of the plan that had been hatched. And that manifested, with the fast-tracked extension of Malaba’s office, days after the Amendment No.2 Act was passed.
Just when the processes contemplated in the Amendment Act for extension of tenure had been met is beyond comprehension.
Yet the nation was faced with a letter confirming that President Emmerson Mnangagwa had extended Chief Justice Malaba’s tenure of office.
This amid reports that Mnangagwa wanted Malaba to stay for political designs.
Then came the emotional outburst by Justice minister Ziyambi Ziyambi after the 15 May ruling, attacking the litigants and the judges who made the judgment. It is quite telling that the statement by Ziyambi went without censure, showing the contempt with which the government perceives the judiciary, especially when rulings do not go in its favour.
Then came the recusal of Justice Webster Chinamora in the contempt of court application filed by Kika. The lawyers of Kika had evidence that Chinamora had met with the secretary of the Judicial Service Commission (JSC), Walter Chikwana, a fact that Chinamora confirmed when he was confronted with the information and was asked to recuse himself.
Lawyer Beatrice Mtetwa wrote to the JSC seeking an investigation into this serious matter and, to date, no results of such an investigation have been put in the public domain.
It is unfathomable how an entire judiciary would stand in acquiescence, oversee the institution’s downfall, on account of the self-preservation of one man.

The damage to the judiciary is monumental; Malaba has not only soiled his name, but he has also soiled the names of judges of the Constitutional Court who will breach known conventions of natural justice, and be judges in their own matter on 14 July 2021.

Believing that the High Court had rebelled, last month Mnangagwa invoked his newly-given powers under Amendment No.2 to the constitution, and handpicked judges for elevation to the Supreme Court.
Among these were Judge President George Chiweshe, in a classic case described by some as demotion by promotion. By so doing, the President was seemingly intent on removing a Judge President he considered hostile, allowing him to recapture the High Court bench.
At the same time, it allowed the President to have in place judges who would hear the government’s appeal to the Supreme Court against the 15 May  ruling.

An application by a concerned citizen, Chamunorwa Chingwe, seeking that a public interview process be done for those not already on the bench for consideration to the Supreme Court was thrown out by Justice Tawanda Chitapi.

Judicial corruption manifests in more ways than just bribery; it equally manifests in political machinations to retain judicial power.
The Malaba matter has long seized to be legal; it is now political. A judiciary whose leader’s incumbency is questioned, whose untenable position is abated and salvaged by fellow judges, will be the death of moral legitimacy for such a judiciary.
Yet courts thrive on integrity and legitimacy. That is the currency of courts. Whereas courts are ordinarily supposed to be protectors of democracy, if what is happening currently in the Zimbabwean judiciary is anything to go by, we have the judiciary enabling capture and democratic regression, a judiciary that is being an active participant in the erosion of its own independence and moral integrity.
By hook or by crook, Malaba may remain in office, but the reality is that he is damaged goods.
No right-thinking citizen or jurist would look at that office and view it with credibility anymore after all this damaging controversy.
There are various challenges to Amendments No.1 and No.2 to the constitution.
So even if the conflicted Constitutional Court delivers ruling for Malaba on 14 July, Malaba’s position remains precarious, with questionable amendments to the constitution which are currently being challenged before the courts.
It will be hard for the Zimbabwean judiciary to recover. For now, it is still sinking into new lows as the nation and the world watch in horror.

*About the writer: Dr Simbarashe Tembo is a Zimbabwean constitutional and human rights lawyer.

Rule of law a fundamental pillar of national progress