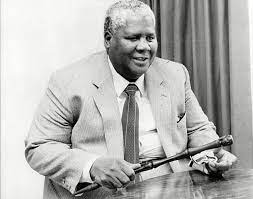 This article by Dr William Jethro Mpofu, a researcher at the University of the Witwatersrand in Johannesburg, South Africa, began as a public lecture presented on the cause of the Joshua Mqabuko Nkomo Foundation at the Holy Trinity Church, in Braamfontein, in that country’s commercial capital on 2 July 2022.

Nkomo – who was born on 19 June 1917 and died on 1 July 1999 – was the founding nationalist leader of Zimbabwe’s main liberation movement.

After his studies in South Africa in the 1940s, Nkomo returned home in 1949. He joined the Rhodesian Railways as a social welfare officer based in Bulawayo. The toxic colonial environment exposed him to racial inequalities, including huge salary differences between blacks and whites doing the same jobs.

Appalled by brazen racism and injustice as well as generally poor social conditions and the suffering under which Africans lived, Nkomo joined the trade union movement to fight racial oppression and inequality.

In 1953, as he became a trade union force to reckon with, he was invited by Sir Godfrey Huggins, Southern Rhodesia’s prime  minister, to represent Africans at the London Conference on the proposed Federation of the two Rhodesian countries and Nyasaland.

The same year, Nkomo resigned from the Rhodesian Railways to start his own business as an auctioneer and insurance agent in Bulawayo, becoming the first African to venture into that area.

In 1955, he became African Workers’ Unions president and that inevitably propelled him into national politics, especially after the December 1954 All-African People’s Congress held in Ghana where he interacted with liberation movements from around the world.

From 1957-1959, Nkomo led the Southern Rhodesia African National Congress. In 1960, when the National Democratic Party was formed he was elected its leader, working with other nationalists such as like Ndabaningi Sithole, Leopold Takawira, Herbert Chitepo, Morton Malianga, George Silundika and Robert Mugabe, among others.

The banning of the NDP in 1961 led to the founding of Zapu, with Nkomo as leader again.

When Zapu was prohibited in 1962, Nkomo led its front, the People’s Caretaker Council.

Upon intensification of the struggle, Nkomo led Zapu throughout the liberation war to Independence in 1980, until it merged with Zanu in 1987 to form Zanu PF. Zapu was effectively dissolved after it was subjected to a campaign of violence and killings, which culminated in genocide.

Through all that, Nkomo remained philosophical about issues, maintaining his idealistic disposition and dream of a united, inclusive and diverse, as well as prosperous nation – he lived as a liberation philosopher until the end of his life.

THE philosophers of liberation fear war, they fear death and love life, theirs and that of others, to a fault.

In the midst of an escalated war such as Zimbabwe’s war of liberation was, the philosopher of liberation would be reluctant to cry havoc and allow bloody battles to ensure.

There are oral narratives that tell of how Nkomo would not celebrate when he got reports of numbers of enemy combatants that Zipra had liquidated in battle.  Philosophers of liberation frequently disarm their soldiers and prevent rather than enable military victory, which may be a good humanist and spiritual thing to do but a grave political fault that gives victory to deadly and unforgiving enemies that go on to turn the dream of liberation into a horrific nightmare, which is what happened in Zimbabwe.

Their excessive love and respect for human life makes philosophers of liberation frequently vulnerable to being killed and/or exposing their soldiers and followers to slaughter.

In God’s world where there is a time for everything, time for war and time for peace, those that are shy or hesitant to deploy the ways of the warrior in war are consigned to the menu of their enemies.

Being against war, which is a great attribute of philosophers of liberation, can be a great weakness that endangers even liberation itself that is the claim to existence of the philosophers of liberation. Nkomo himself, in his book The Story of My Life, belabours the point that he thought armed struggle unnecessary and needless, and that belligerents should have negotiated from the start.

Philosophers of liberation, because of their grand visions and royal aura – if not divine touch– frequently command great following. Some of their many supporters may not even know why they support and follow them.

Like cult leaders, they are frequently followed without clear reason or question, except what can be summarised and simplified as their greatness. Supporters and followers tend, then, to manufacture many myths and fictions about the leader to explain their support.

The whole political folklore around Nkomo, for instance, that he had supernatural powers and otherworldly abilities prevented many brave soldiers and wise heads from correcting him when he was wrong.

Nothing is as popular and powerful as a good philosopher of liberation in his or her time. They command incorrigible support and a following. They are sheepishly listened to even when they are politically wrong, like cultic leaders. That makes them dangerous personages that can lead entire populations to the abyss.

For their huge following, they often then leave behind many dead supporters, angry followers and disappointed believers that realise too little too late that the political direction taken was to hell even if it was paved with great intentions and decorated with beautiful flowers.

With all their love for life, theirs and that of others, philosophers of liberation are seized with political messianism. They can be sacrificial and selfless to a point of being suicidal. It is for that reason that, like the religious messiahs, they almost always end up on the cross of crucifixion. If they are not crucified physically as in being killed, they are crucified symbolically and otherwise. They become candidates for persecution and humiliation if they are not assassinated.

The reason for this is that they are hated and feared by their opponents. Robert Mugabe, for instance, was what Doris Lessing called a “terrified little man” when Nkomo was a bold huge man who exuded a terrifying aura that changed the weather and the climate when he appeared.

Mugabe’s hatred for Nkomo that covered his fear of the man was so extreme. Paul Moorcraft records an incident when Nyerere was conducting some peace talks between Mugabe and Nkomo. When Mugabe’s turn came to sit before Nyerere, he refused to sit on the same chair that Nkomo had sat on, calling the Zapu leader “that fat bastard”.

Apparently, Mugabe would only sit on the chair if it was fumigated and disinfected. Mugabe’s persecution, humiliation of Nkomo, and the burning desire to eliminate him physically was rooted in extreme fear and hatred.

However, Nkomo, despite all of Mugabe’s animosity and dread, continued to invest trust, hope and even love and respect for Mugabe as I will illustrate below.

Another strength which is also a weakness of the philosophers of liberation as great humanists is their strong moralism. They are afraid of the cunning and scheming that normally accompanies political gamesmanship.

Even as they get involved in politics that has been rendered a “dirty game” by cunning schemers, the philosophers of liberation normally keep to fair and just play and lay all their cards on the table which makes them pathetic politicians in a world where politics is played as a dirty game by schemers and cunning foxes. As I demonstrate below, Rhodesian prime minister Ian Smith secretly approached Nkomo, twice, and offered him the country and power, and Nkomo insisted on involving Mugabe in the secret deal, against all political common-sense.

The philosopher of liberation proper is allergic to opportunism which is normally capital for the pragmatic politician.

Optimism is a name that philosophers of liberation answer to. In the thickest of dystopia and darkness, they see light and utopia. They are tragic optimists in that they cling to the hope that things will come right even when all signs point to the abyss. They are incorrigible visionaries and, as a result, they fantasise instead of strategising in politics.

That makes them poor and failed politicians that can be accused by cynics of living in the proverbial paradise of fools, seeing bright stars in the sky when it is burning missiles coming to burn them and their supporters.

In that way, the typical philosopher of liberation is a dangerous dreamer.

Philosophers of liberation, because of their poverty of realpolitikal thought and disdain for cunning, scheming and calculating in politics, rarely come to power. They come out losers in negotiations and elections because fraud, force and scheming are not theirs.

When they come to power, which is rare, they become benevolent dictators. They are not always democratic in decision-making but lead or rule like monarchs where their opinions are political doctrines, and their words are political commandments.

But they always love their people and are loved by them. Kenneth Kaunda, the great humanist of Zambia, was such an example. Kaunda would simply shed tears and sob than make a strong argument. It might have been emotional blackmail, but Kaunda frequently used tears, presidential tears, to advance his political will before the Zambian nation.

But still, the Zambians loved their KK, he who would not hurt a fly. In power, philosophers of liberation become national monuments, saints and legends. Their political victory is frequently more symbolic than material.

Because of his Madiba magic charm, Nelson Mandela became an international tourist attraction, for his rare humility and conciliatory spirit. He became more of a symbolic and ceremonial leader who left his followers still displaced, dispossessed, unequal and poor in a South Africa where economic apartheid walks on two legs in the streets. To be continued…

About the writer: Dr William Jethro Mpofu is a Zimbabwean-born researcher at the University of the Witwatersrand, Johannesburg, in South Africa.

Related Topics:Joshua Nkomo
Up Next

Inflation is rising in Kenya: here’s why, and how to fix it