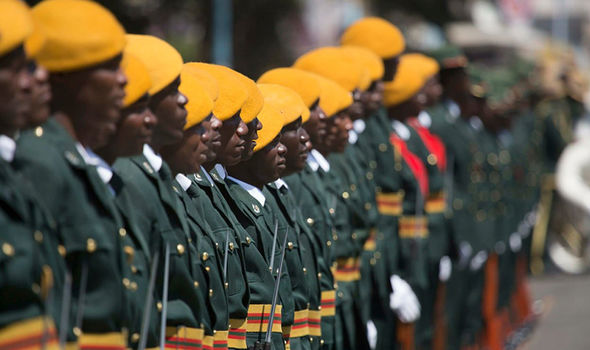 THE deepening mystery behind the recent botched smuggling of AK-47 assault rifles and scores of ammunition magazines through Beitbridge border post – now playing out in the courts – has been unravelled as it emerged the guns were ordered from the Zimbabwe National Army (ZNA) for the Presidential Guard, an elite unit responsible for protecting the President.

One of those arrested for gun-running is Group Captain Leonard Matambo, an Air Force of Zimbabwe senior commissioned officer who works for the Zimbabwe Defence Industries (ZDI). He was arraigned on 29 August for allegedly trying to facilitate the smuggling into the country of the weapons by a former military medical doctor, Gugulethu Mabhena.

The two were arrested and charged with conspiring to smuggle 31 AK-47 rifles and 62 magazines. In military terms, the guns are enough to serve a platoon.

Military sources say the arms were brought for the Presidential Guard, but Mabhena botched the deal.

“The order for the gun consignment was generated from the General Staff (GS) Branch of the ZNA for the Presidential Guard to bolster President Emmerson Mnangagwa’s security, especially going to the potentially explosive elections next year. It was given to a middleman who then looked for an arms dealer, in this case Mabhena, in Johannesburg. Mabhena is originally from Bulawayo, but was in the ZNA as a medical doctor before he resigned and left the country,” the source said.

“While in Johannesburg, Mabhena went into private medical practice. At the same time he became an arms dealer supplying the Zimbabwean military. So it’s not the first time he was smuggling guns into the country. He hustles as a gun-runner.”

Another source said after he was given the order, Mabhena then went to Spartan Arms International, which sells arms in Edenvale, Johannesburg.

Spartan Arms is a top firearms and accessories supplier in South Africa that deals with the public as well as wholesale bulk buyers. It started in partnership by Demis and Terry Spartan.

Demis, who is an advanced level firearm instructor, has over 10 years of experience in the firearms trading and ammunition manufacturing industry.

“So Mabhena then bought the guns and decided to smuggle them through Beitbridge to hide their point of origin and destination. Some cover of a safari operator was used. However, his operation was clumsy even though he has experience.

“Firstly, they bought a wrong model of guns. So the ZNA refused to accept them as that would raise security, financial and accountability issues. No one wanted to touch the guns.

“Secondly, when those who placed the order complained the guns were the wrong ones, Mabhena couldn’t take them back; so he decided to take them to ZDI [Zimbabwe Defence Industries] as the Zimbabwe Revenue Authority (Zimra) and later police closed in on him. Intelligence services were also involved in nailing Mabhena. This was partly because of inter-security agency rivalries and grudges.

“Some police officers were previously exposed by the army for allegedly smuggling guns for poaching activities and dealt with harshly by the Joint Operations Command, which brings together police, army and intelligence service chiefs. So some in the police force feel that army officers also smuggling guns must be exposed since they like exposing others. The situation is exacerbated by latent tensions and rivalries between the army, police and intelligence security services.”

The sources say when Mabhena was nabbed in Beitbridge, he then reached out to ZDI general manager Hope Goliath Mutize – not Mutizwa/ Mtizwa as the media has been wrongly reporting – for rescue. He is Mutize.

Mutize then instructed Matambo to write a letter to Zimra to allow Mabhena to leave with the smuggled guns, but the police and other security agencies refused. This led to a face-off, their eventual arrest and the ongoing court case.

The letter from ZDI to Zimra has now become a major subject of court inquiry. Mutize, while working with the then ZDI boss retired Colonel Tshinga Dube, was involved in the controversial sale of arms to South African mercenaries led by Simon Mann, a British Sandhurst-trained former Special Air Services (SAS) officer, jailed for plotting Equatorial Guinea leader Teodoro Obiang’s overthrow in a coup in 2004.

The late former Zimbabwean president Robert Mugabe, working with South African authorities, thwarted the coup, leading to the arrest of Mann and his co-conspirators in Harare and Malabo, Equatorial Guinea’s capital.

While in prison, Mann wrote a book about the botched coup titled Cry Havoc.  Mann’s remarkable first-hand account of his life reads like a thriller, taking readers into the world of mercenaries and spooks, of murky international politics, big oil and big bucks, action, danger, love, despair, and betrayal.

His destination was Equatorial Guinea, with the intention being to remove one of the most brutal dictators in Africa in a privately organised coup. The plot had the tacit approval of Western intelligence agencies.

Mann had planned, overseen, and won two wars in Angola and Sierra Leone. He reveals the full involvement in the coup plot of Mark Thatcher, son of the late former British prime minister Margaret Thatcher, the endorsement of a former prime minister, and the financial involvement of two internationally famous members of the House of Lords.

He discusses how the British government approached him in the months preceding the Iraq War to suggest ways in which a justified invasion of Iraq could be engineered. He also describes the pain of telling his wife Amanda, who gave birth to their fourth child while he was incarcerated, that he believed he would never be freed.

Mutize, now entangled in the current arms smuggling saga, was involved in that story through ZDI arms supplies, working with Dube.

At the time, Mutize was ZDI group marketing manager. Mugabe subsequently became Obiang’s close friend and received lots of money for that.

Obiang, who went to Singapore when Mugabe died there in 2019, also funded the late Zimbabwean strongman’s activities. While one source said the order for the arms bought by Mabhena originated from the ZNA GS Branch led by Chief-of-Staff (General Staff) Major-General Kasirai Tazira, insiders say the department does not handle procurement.

The ZNA is commanded by Lieutenant-General David Sigauke, a three-star General, who is deputised by Tazira, Dube and Emmanuel Matatu, all major-generals. Sigauke, Tazira, Dube and Matatu constitute the ZNA command element.

Below them are five staff branches: General Staff, Training, Administration, Quartermaster and Inspectorate.

While the precise source of the order for the purchase of the arms remains unclear, insiders say under Mutize’s orders Matambo conspired with Mabhena to smuggle into the country the consignment of 31 AK-47 automatic firearms and 62 magazines from South Africa.

Acting on a tip-off, security agencies on 29 August found Mabhena in possession of 31 AK-47 rifles and 62 AK-47 magazines in a white Toyota King Cab (4JK36RL GP) at Manica Transit Shed in Beitbridge.

Police say Mabhena had imported the consignment without a firearms dealer’s permit.  In terms of Zimbabwean law, there are many requirements for the registration and licencing of firearms, as well as getting permits.

After moving to South Africa, Mabhena had ventured into the business of supplying arms mainly to the Zimbabwe Defence Forces (ZDF), which largely uses underground networks to buy weapons as a sanctions-busting measure since it is under a European Union, British and United States arms embargo.

There are other Western nations which do not sell arms to Zimbabwe like Canada and Australia. The targeted sanctions were imposed on Mugabe’s regime at the height of his authoritarian repression, electoral theft and human rights abuses, including violent attacks, killings and terror.

An arms embargo is an instrument of coercive diplomacy that seeks to prevent transfer of arms and military-related material to a specific state or armed group.

They are typically imposed on states or rebel groups that pose a significant threat to regional or international peace and security.

Arms embargoes are based on the assumption that the transfer of arms and military-related material into an area characterised by high levels of political tension, aggression and violence would have a destabilising effect.

The measures are also a message of disapproval and a tool for punitive action used to reduce incidents of human rights abuses, politically motivated murders and the intensity of the violence.

After some court battles, Harare regional magistrate Stanford Mambanje ruled on Wednesday that the matter should be heard in camera.

Matambo’s lawyers had applied to have the matter heard in camera as he filed his bail bid.

Apparently when Mutize arrived in court to testify in camera on Thursday, he was picked up by the police.

The magistrate had said the case was of public interest and he needed more time to apply his mind before making a determination as to whether the case should be held in open court or in camera.

There is an alternative charge of violating the Firearms Act. However, Matambo says the letter to Zimra for the release of Mabhena’s consignment was written by Mutize.

His lawyers brought a letter that he claims was written by Mutize confirming the guns were being brought into the country legally, contrary to the state’s charges. Prosecutor Tafara Chirambira opposed submission of the letter to court, saying it should be tendered by its author – Mutize – who should also be called to testify in person.

As a result, Chirambira opposed bail, saying Matambo poses a security threat to the state if released on bail.

But The NewsHawks understands the arms were ordered for the Presidential Guard to bolster Mnangagwa’s security, although no one now wants to touch the smuggled guns.

Capital markets a necessity for entrepreneurs and companies