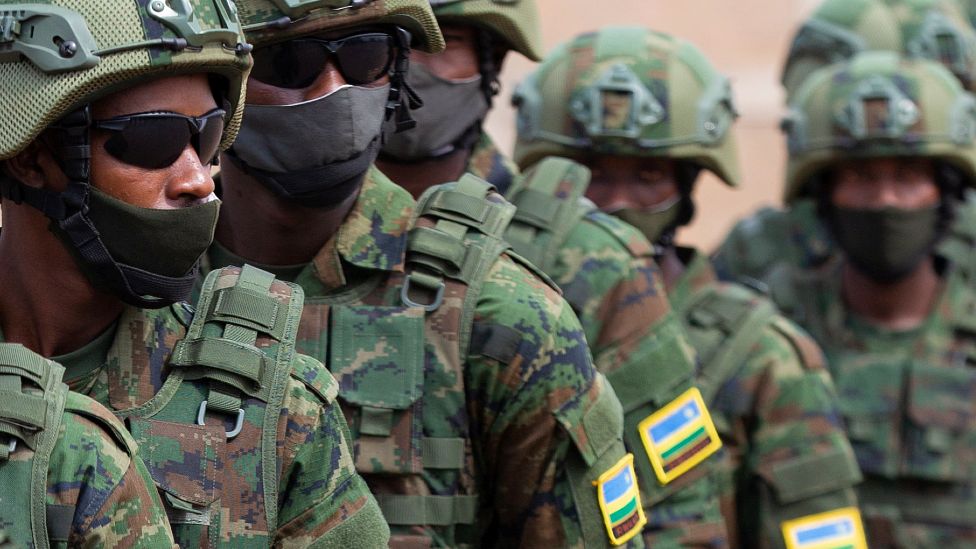 ROTTING fruit lies beneath mighty mango trees in northern Mozambique — an area empty of the people who would usually pick them.

Over the last four years, many villages and towns in Cabo Delgado have been abandoned — but in the last month Islamist militants have been pushed back by a 1 000-strong contingent of Rwandan troops.

Buildings lie in ruins, roofs caved in, evidence of shelling or blasts still visible. Walls falling apart and weeds growing right inside what were once human dwellings.

I was among a group of journalists seeing, for the first time, the destruction left behind by some of the least known Islamist militants in the world. Locals referred to them by the Arabic name for youth – al-Shabab.

But they have no connection to the better known group of the same name based in Somalia. They are said to be affiliated to the Islamic State.

The Rwandan forces took us on a tour of the province, following the routes taken over the last few weeks.

One group moved from Palma in the north, the scene of a hotel attack in which dozens were killed in March — some of the victims were later found beheaded with hands tied to their backs. The attack forced French energy giant Total to shut down its natural gas plant there.
A second group advanced from the south-west of the province with both Rwandan divisions moving towards the port city of Mocímboa da Praia, which they took on 8 August as Mozambican maritime forces cut off sea access.

They encountered ambushes and skirmishes along the way as the militants fled south towards the forests of Quirimbas National Park with their captives and casualties, Col Rwivanga said. About 100 insurgents were killed, and Rwanda lost four men in the offensive, he said.
At the Islamists’ military and spiritual headquarters of Mbau, many houses appeared to have been abandoned for much longer, going by their state of disrepair. Soldiers said they found bunkers there.

Only on one stop, Quitunda, did we find the lively sounds of children playing football and a man in his 80s, who sat on a log, watching the game.

“We don’t know what the rebels want,” he told me. “They’ve destroyed our mosques, they’ve attacked churches.”

He moved here when he heard that the militants had left.

He’d like to go back to his home in the port city of Mocímboa da Praia – but it’s in ruins. Not a single building I saw there had been spared the effects of years of fighting.

At the town’s airstrip, Rwandan soldiers showed us the weapons they had recovered from militants.

Mostly AK-47s, some of them had been painted with names, presumably, of the fighters who once owned them. There were also rocket-propelled grenades and anti-aircraft weapons.
A prisoner of war was also kept there, an 18-year-old former fisherman, who told journalists he was captured by the fighters and recruited by force.

Some of the women who had been rescued from captivity were more forthcoming.

We met them in Pemba, where many of them had fled.

A mother of six told me she had been taken from her farm together with three of her youngest children.

They were made to walk for at least a week taking short breaks.

“They’d beat the children up if they complained that they were tired,” she said. The militants kept her as a sex slave for over a year.

As we spoke she breastfed a baby she had conceived and delivered while in captivity. “There wasn’t enough food or any other supplies,” she told me.

She and some others had managed to flee when helicopters hovered above them in recent weeks, forcing the fighters, who always kept guard, to run away.

Another former captive, a 24-year-old woman, told me she had watched them kill two women who had tried to escape.

The militants instilled fear and mistrust among them. Some captives would inform on each other if they overheard plans to flee.

The militants were active at night and forced them to sleep during the day, she told me.
They would take the women to villages they controlled to harvest food – mostly cassava. But it was barely enough to feed the fighters and their captives.

“Please help rescue those who are still in captivity,” she pleaded.

She wants to go back home to her husband and children, but she does not know how they will react. Her life will never be the same again.

Mozambican forces are now stationed in the areas recently occupied by the militants. But one cannot help notice how well-equipped and co-ordinated the Rwandan army is in comparison.
In Pemba, I asked visiting Rwandan President Paul Kagame about the cost of the operation, funded, we had been told, by his government.

“It is a fact that it is costly,” he responded, “So, we need more support.”

He is often criticised for the way he treats dissent in Rwanda but he has become a hero in Mozambique.

At the government-organised event, local people waved flags and pictures of him.

The Mozambican government is urging people to return to their homes. Rwandan forces will remain in Cabo Delgado until they are resettled. The militants may be on the back foot, but residents fear the conflict is far from over. — BBC.