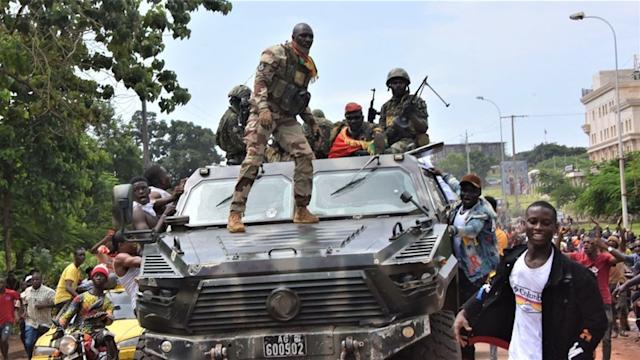 …Why is there a resurgence of military coups in Africa? Something is fundamentally wrong with the prevailing socio-political structures in Africa. The liberal peace architecture has recorded failures on the continent.

More than 40 officers were arrested within 24 hours of the attempted coup, which the Sudanese authorities claimed was carried out by those loyal to the ousted president, Omar al-Bashir, in a bid to stall the transition to democracy.

Al-Bashir is wanted by the International Criminal Court (ICC), which is negotiating his extradition to The Hague. Could a change of government halt al-Bashir’s possible extradition?

Since the removal of al-Bashir by the military in April 2019, the transition to democracy has been fragile and turbulent. Apart from the Bakrawi-led putsch, there have been other attempts to unseat Hamdok. The Sovereign Council, which has 39 months to administer Sudan under a fragile power-sharing accord between the military and civilians, is confronted with both internal crises and external hostilities.

Under a complex arrangement, a Presidential Sovereign Council was to be led by the military for the first 21 months, after which it was to be replaced by a civilian government for the remaining 18 months.

Hamdok accused external actors of collaborating with the military. There are growing tensions between the civilian and military factions, while the economic crisis, which led to the removal of Bashir in April 2019, remains unresolved.

Sudan’s total debt to the International Monetary Fund (IMF), accumulated mostly in arrears and penalties, has forced the Sudanese government to embark on subsidy cuts, which has aggravated the harsh economic reality in the country.

Furthermore, the negative economic impacts of the Covid-19 pandemic have worsened the economic profile of Sudan — one of the most impoverished countries in the world. About 6.01 million Sudanese, or 14% of the total population of 44.17 million, are living in extreme poverty. The citizens were very calm after the announcement of the foiled coup, strengthening the view that a successful military coup would be accepted without mass resistance. This is a bad sign for democratic consolidation in Sudan.

The recent insurrection of the military in Guinea is another sad case. Despite President Alpha Condé’s public rhetoric about the impossibility of a coup under his leadership, the 83-year-old leader was arrested on 5 September 2021 by Guinea’s armed forces during a coup in the capital city, Conakry.

The coup, led by Mamady Doumbouya, a Special Forces commander, threw the world’s biggest producer of bauxite — used for making aluminium — into pandemonium. As expected, Doumbouya immediately dissolved the constitution and the government.

He announced the military’s goodwill, and a transition plan, and installed himself as president. He established a National Rallying Committee for Development (CNRD), headed by himself, and became the leader of the armed forces, while a civilian prime minister would head the government.

His plan also included the establishment of the legislature, called the National Transition Council (CNT). Indeed,

Doumbouya appears to be in total control. He blamed the ousted president for the country’s pathetic infrastructure, corruption and economic stagnation.

Research has shown that military regimes in Africa have performed worse than their civilian counterparts; furthermore, performance should not be at the expense of legality. Although civilian administrations have consistently failed African populations, military involvement in politics remains an aberration that must be resisted.

The international community has frowned on the usurpation of authority in the two countries. The African Union (AU) and the regional economic bloc, the Economic Community of West African States (Ecowas), suspended Guinea from all its decision-making platforms.

Guineans, frustrated by two successive post-independence leaders — Sékou Touré and Lansana Conté – who stayed in power for 26 and 24 years, respectively, were shocked at Condé’s manipulation of the constitution to allow for his third term in office and nonplussed by his controversial victory at the October 2020 polls.

In Chad, the military regime of Mahamat Idriss Déby Itno is more interested in power consolidation than a transition to democracy, while in Mali, the interim military junta is making no significant progress towards meeting the 18-month schedule for power disengagement. This is really a trying time for Ecowas and the AU.

Why is there a resurgence of military coups in Africa? Something is fundamentally wrong with the prevailing socio-political structures in Africa. The liberal peace architecture has recorded failures on the continent.

Proponents of this school of thought have continued to celebrate the democratic peace theory, based on the “so-called” resilience of political and representative institutions, as well as institutional constraints, within the broad discourse on effective “internal mechanisms”, which embrace peace, negotiation, accountability and reconciliation.

The brand of democracy exported to Africa is lacking in these attributes. Any attempts by the citizens to discuss the nature of relations between themselves and the state, based on shared identity, common values, and goals, have been resisted by Africa’s ruling class and political entrepreneurs, who have personalised public goods and manipulated the political spaces. African societies have been militarised to the extent that they celebrate the resurgence of the military in politics in West Africa and the Sahel.

While the AU-United Nations Hybrid Operation in Darfur (Unamid) completed its withdrawal of 6,000 troops and police from Darfur by the 30 June 2021 deadline, one wonders why it was deemed necessary to deploy foreign troops in the Sahel.

The presence of foreign troops has been unable to restore peace to the Sahel and had no influence on regime stability, as seen in Mali, Chad and Guinea, where the military has struck in recent times.

Indeed, national, regional and global actors have “refused” to embark on sustained and multi-dimensional approaches to address the structural root causes of the conflict and underdevelopment in Africa.

Instead, each party has continued to pay lip service to the African security and development projects. Across Africa, the era of ideologically inclined developmental planning has been truncated by this “blind” rush for liberal socioeconomic and political templates.— Daily Maverick.

Related Topics:Africa
Up Next

How to revive African tourism after the Covid-19 pandemic