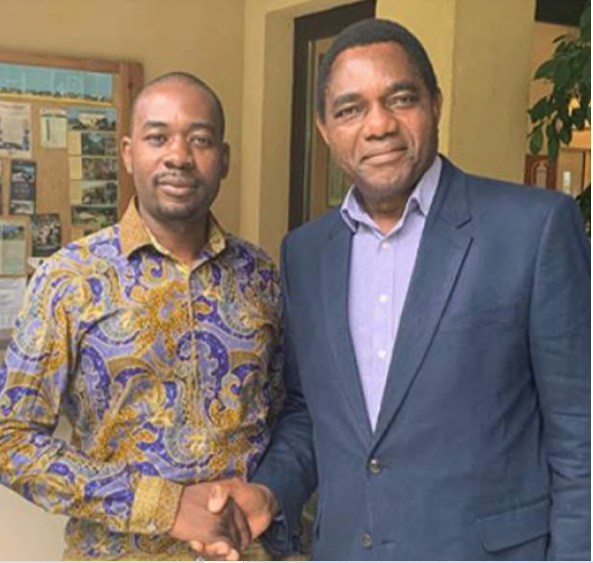 IN the aftermath of the rise of Zimbabwe’s main opposition leader Nelson Chamisa’s Citizens’ Coalition for Change (CCC) and its “yellow wave” from the ashes of the now defunct MDC-Alliance and Zambian President Hakainde Hichilema’s dramatic electoral victory last August, Zimbabwean President Emmerson Mnangagwa is worried sick and scared stiff of a major geo-political and electoral shift in the country.

Intelligence sources told The NewsHawks that Mnangagwa’s administration is closely monitoring Chamisa and Hichilema’s relations and manoeuvres, especially following the local opposition leader’s meetings with the Zambian President twice inside five months; first in Lusaka during his inauguration on 24 August 2021 and recently in South Africa on 26 January during a book launch.

The book launch was held at the Johannesburg Holocaust and Genocide, 1 Duncombe Road, Forest Town, at 6pm on 26 January.

This comes as fears within Mnangagwa’s regime mount that veteran Kenyan opposition leader Raila Odinga, who is also close to Chamisa, could win elections scheduled for 9 August, providing another geo-political dimension that could boost the CCC’s electoral prospects.

Kenya is barrelling towards a highly contentious and likely tumultuous presidential election that could alter the future of the country’s political system. Kenya will hold general elections on 9 August to elect the president, members of the National Assembly and Senate, and various county positions.

The implications of the Kenyan elections on Zimbabwe could be far-reaching, especially if Odinga wins. With South Africa’s relations with Zimbabwe icy of late over protracted political and economic problems north of the Limpopo, Chamisa could get more allies in the region, including Zambia, Malawi and Kenya.

Hichilema and President Lazarus Chakwera’s victories in Zambia last year and in Malawi in 2020 respectively changed the electoral narrative in the region where incumbents hardly lost power through polls; they usually rig or steal the polls.

Hichilema visited South Africa recently as an invited guest speaker at a book launch where he met Chamisa. He also paid a courtesy call on South African President Cyril Ramaphosa at his Mahlamba Ndlopfu official residence in Pretoria.

Hichilema was guest speaker at the launch of a book titled Expensive Poverty: Why Aid Fails and How it can work written by his friend Greg Mills, director of the Brenthurst Foundation, a Johannesburg-based organisation established by the Oppenheimer family in 2005 to promote new ideas and innovation to strengthen economic performance in Africa.

The foundation reportedly bankrolled Hichilema’s United Party for National Development during the last elections and before. It previously facilitated talks among Zimbabwean political players behind the scenes.

Tanzania’s Zitto Kabwe, leader of the Alliance for Change and Transparency, was also present as Zambia turned the page on Edgar Lungu’s government. “Zimbabwe’s security establishment is deeply worried about Chamisa’s links with Hichilema.

Since HH (Hichilema) came to power, the intelligence has been working hard to establish the nature of their relations and whether it involves financial support,” an intelligence source said. “Their worry is on various fronts: diplomatic, political and geopolitical.

Diplomatically, the issue is whether this won’t damage relations between Zambia and Zimbabwe; politically if HH supports Chamisa and his CCC, and in geopolitical terms how this will influence relations between the two countries and power relations in the region.

“Bluntly put, Mnangagwa is worried that HH may fund Chamisa and influence the outcome of the 2023 elections, mainly the presidential poll.”

When Chamisa flaunted his close relations with Hichilema, saying he had called him after his victory, Mnangagwa came out to claim that he was a friend to the Zambian leader and his wife, in fact a relative.

“I, in particular, am a friend of almost all presidents of Zambia from Kenneth Kaunda to the incoming President that we know each other very well. I congratulate my brother for being voted overwhelmingly by the people of Zambia,” Mnangagwa said.

“The president-elect phoned me while I was at my farm in Kwekwe inviting me and we discussed so many things in Tonga. I realised we are related. In fact, his wife Mutinta Hichilema and I grew up in the same town of Mumbwa, west of Lusaka.”

Sources say it was the Johannesburg book launch meeting that got Mnangagwa’s apparatchiks more worried. The launch was attended by some businesspeople, including members of the Oppenheimer family, raising fears in Harare that a potential funding deal could have been sealed behind the scenes.

In October last year, Daily Maverick hosted a webinar on the book in which CCC vice-president Tendai Biti was a panelist, together with popular Ugandan opposition leader Robert Kyagulanyi Ssentamu (commonly known as Bobi Wine).

Although foreign political funding is banned in Zimbabwe under the Political Parties Financing Act, local political parties, including Zanu PF, have in the past received money from abroad. Zanu PF has received funding from China and foreign businesspersons, while the opposition MDC received funds from the West.

“There is grave concern in government about this because the geo-political shift flowing from elections in Malawi, Zambia and possibly Kenya might boost the Zimbabwean opposition’s electoral prospects. It is a well-known fact that Hichilema is close to Chamisa and Biti; so his ascendancy is a political and electoral advantage for them. There are fears Hichilema could help to fund or mobilise resources for them,” a government official told The NewsHawks.

“The CIO is probing dynamics of their relationship to see how it can have an impact on the upcoming elections. There is already belief that Hichilema’s victory has energised opposition parties in the region and given them renewed confidence, while the youth bulge is seen as something which opposition parties can capitalise on.”

Concerns over Mnangagwa and his party’s declining popularity were fuelled by a recent Central Intelligence organisation (CIO) report which showed that Zanu PF has a 45% probability of winning the 2023 elections due to popular discontent facing government.

The CIO always conducts pre-election surveys to gauge public opinion and how Zanu PF might perform before all general elections.

The CIO report says Zanu PF’s strength, as reflected by numbers after the restructuring exercise, could have been inaccurate due to inflation of numbers by party officials.

Apprehensions are growing in the corridors of power that Mnangagwa’s social base has shrunk since 2017 while the international and local goodwill he enjoyed after the ouster of the late former president Robert Mugabe has evaporated due to his failure to deliver.

His botched reform programme has resulted in Harare’s international re-engagement process being derailed, leaving his administration rated as a failure.